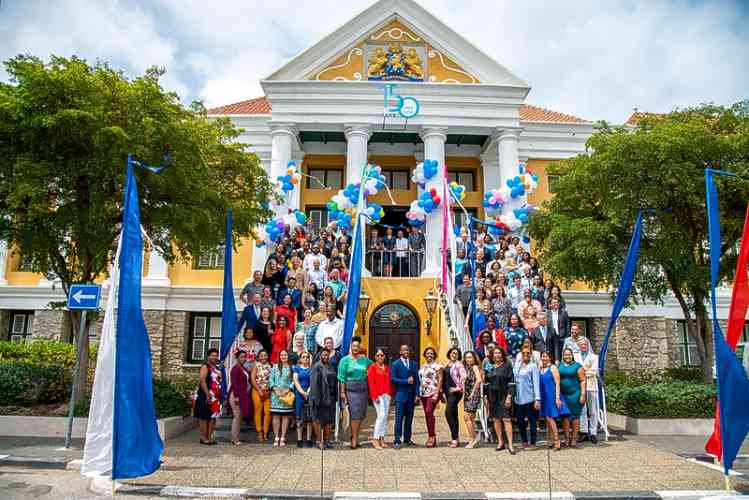 Staff members of the Joint Court of Justice branches in Aruba, Curaçao, St. Maarten, Bonaire, St. Eustatius and Saba gathered for a group photo at the iconic “Stadhuis” in Willemstad, Curaçao, on Friday.

WILLEMSTAD–The Civil Code, the Criminal Code and the Rules on the Establishment and Composition of the Judiciary in the colony of Curaçao came into force on May 1, 1869, and the Court of Justice was born. On Friday – 150 years and 24 Court Presidents later – (former) Court Judges and Presidents, speakers, and University of Curaçao teachers and students gathered for a symposium and reception to mark the Joint Court of Justice’s 150th anniversary.

Guests travelled from Aruba, St. Maarten, Bonaire, St. Eustatius, Saba and the Netherlands to join in the celebration at University of Curaçao which was totally different from the Court’s inauguration in 1869. That occasion was marked by a cannon shot from Fort Nassau, a military escort and a meeting of the President with the members of the Court.

The celebration of the Court’s 100th anniversary on May 1, 1969, which also included a symposium, also had a different character, as the dress code at the time was “smoking.”

It was the King’s Procurator Abraham de Rouville, the later Governor of Curaçao, who issued a report to the “High Government” in the Netherlands in 1857 on the – in his eyes – highly sad state of judicial policy in the colony Curaçao and dependencies.

At the time, appeals were only heard in the Court of Justice in Paramaribo, which, for example, only happened three times in nine years. De Rouville also objected to lay judiciary proceedings threatening the independence of the judiciary. His report eventually led to the “Regulations on the Establishment and Composition of the Judiciary.”

This judicial organisation originated in Surinamese proposals regarding the judiciary there. The most radical change after 1918 took place in 2010, with the privatisation of the Court.

Today, the Joint Court of Justice consists of 43 Judges and 136 staff members. “Together, we are committed to guaranteeing citizens’ confidence in the rule of law and we are committed to the mission of the Court; namely, to serve the rule of law with impartial, independent, accessible, timely and effective justice,” Joint Court President Eunice Saleh said in opening the symposium.

“It cannot be emphasised often enough: a well-functioning and independent judiciary is of vital importance for our democratic constitutional state, and a condition for a just society. We can be proud of the way the Court, one of the oldest institutions of the Kingdom, provides for this in the past, now and in the future. I am convinced that if Governor De Rouville were to present a report today on the state of judicial policy, the conclusion would be very different,” Saleh stated.

Main speaker at the symposium was Professor Marc Loth, who sketched “scenarios in the life of a 150-year-old.” Other speakers included former Joint Court Presidents Lisbeth Hoefdraad and Jaime Saleh, Vice-Dean of the Bar Association of Aruba Johan Sjiem Fat and former Ombudsman of St. Maarten Nilda Arduin.