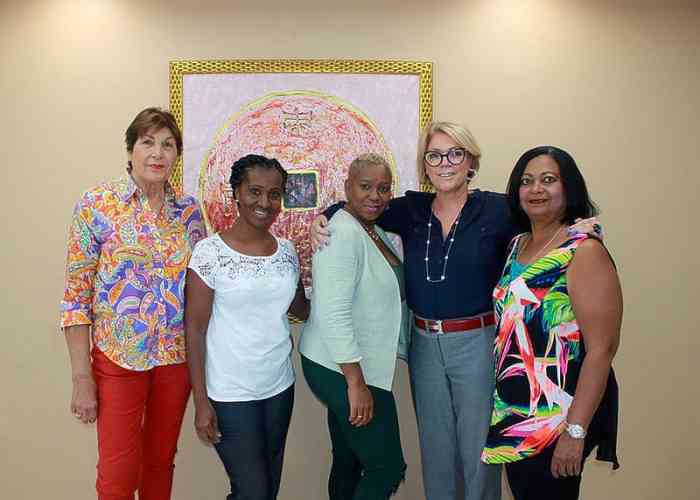 PHILIPSBURG–Long-time Carnival troupe The Jolly Jumpers announced on Thursday that it is making a comeback for the fiftieth anniversary of St. Maarten Carnival. After being absent from the Carnival scene for many years, it has decided to form an integral part of the Rio Productions line-up during the First- and Second-Day Parades in April 2019.

Former Jolly Jumpers President Elise Romer expressed interest in participating in the anniversary year as a show of support to Carnival 50. “We would not have missed this for the world,” she said. Romer was joined by Joyce Wathey and Rosa Brooks, both board members of the longstanding Carnival troupe.

Jolly Jumpers was not only one of the main troupes for St. Maarten Carnival, but also the local pioneer of the Balloon Jump-Up and the Lighted Parade. “Back in the day, the Lighted Parade consisted of participants who wore their day costumes, fully covered in lights,” said Romer.

Rio Productions President Brenda Wathey said on Thursday, “I am delighted that these Carnival pioneers chose to collaborate with Rio Productions for the 50th anniversary of Carnival. When history meets modern, beautiful things happen! I have learned to respect the ones that came before us, so when we understood their intentions to play mas for this special occasion we immediately made provisions to ensure that these wonderful Carnival contributors would have a prominent place in our line-up next year.”

St. Maarten’s 50th Anniversary celebration is expected to be one of the biggest festivals in the region ever, with thousands of participants and spectators, an abundance of live entertainment and a wide variety of tourists from all over the world. St.  Maarten Carnival Development Foundation (SCDF) announced April 22 to May 6, 2019, as the dates for the 50th anniversary of St. Maarten Carnival and pledged that it will be going all-out for Carnival’s Golden Anniversary.

Fans are encouraged to stay tuned to Rio Productions’ Facebook page and website to see the Jumpers’ designs in the coming weeks.