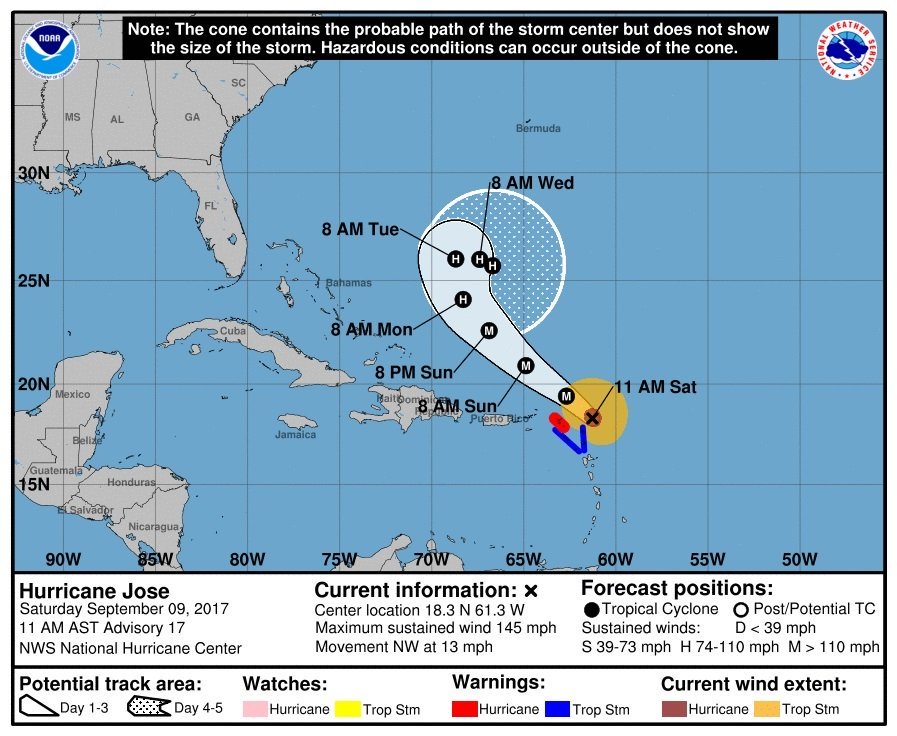 PHILIPSBURG–The centre of Hurricane Jose was located near latitude 18.3 North, longitude 61.3 West. St. Maarten/St. Martin remains under a hurricane warning and a curfew is firmly is in effect. The eye is expected to pass the local area around 2:00pm.
Jose is moving toward the northwest near 13 mph (20 km/h). A continued northwest motion is expected during the next couple of days.
On the forecast track, the core of Jose will pass just north of the northern eastern Caribbean later today.
Maximum sustained winds are near 145 mph (230 km/h) with higher gusts. Jose is a category 4 hurricane on the Saffir-Simpson Hurricane Wind Scale. Gradual weakening is expected to occur over the next couple of days.
Hurricane-force winds extend outward up to 35 miles (55 km) from the centre and tropical-storm-force winds extend outward up to 140 miles (220 km).
The latest minimum central pressure reported by an Air Force Reserve reconnaissance aircraft is 945 mb (27.91 inches).
Hurricane conditions are expected within the hurricane warning area today. Tropical storm conditions are expected within the tropical storm warning areas through this evening.
Jose is expected to produce total rain accumulations of 2 to 4 inches in the portions of Northern Leeward Islands, with isolated maximum amounts of 6 inches. This rainfall will maintain any ongoing flooding and may cause additional life-threatening flooding.
A dangerous storm surge will raise water levels by one to three feet above normal tide levels along the immediate coast in the hurricane warning and tropical storm warning areas. Near the coast, the surge will be accompanied by large and destructive waves.
Swells generated by Jose are affecting portions of the northern eastern Caribbean. These swells are expected to continue for a couple of days, and could cause life-threatening surf and rip current conditions.