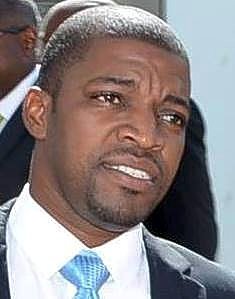 PHILIPSBURG–The Judge at the Court of First Instance, on Tuesday, declared the December 12, 2014, suspension of St. Maarten Housing Development Foundation’s (SMHDF’s) Managing Director Henry Lynch unlawful. As there were no urgent grounds for his dismissal as per February 4, 2015, SMHDF must pay damage compensation and pay for Lynch’s legal fees, the Court decided.

Almost 16 months ago, Lynch saw his service agreement with SMHDF terminated, based on a host of allegations concerning financial mismanagement and embezzlement.
His case is linked to those of Financial Controller Emilio Kalmera and Executive Assistant Miurica Williams, who were also suspended on allegations of “fraud, embezzlement, violation of human-resource procedures, forgery of documents and deliberate mismanagement of funds and assets of SMHDF,” according to the Foundation’s attorney in his letter of December 12, 2014. Lynch was also suspended on the same date and was dismissed later.
Following similar procedures in the cases of Kalmera and Williams, whose dismissals were considered illegitimate and were also awarded damages, the Court also voided SMHDF’s decision to suspend Lynch and ordered the Foundation to pay him NAf. 5,000 in compensation.
SMHDF was also sentenced to pay Lynch’s salaries and emoluments from February 2015 up to and including November 2015. This amount to NAf. 19,371 per month, with six per cent vacation pay and with interest.
The Housing Foundation also has to pay their former Managing Director’s monthly pension and life insurance premiums of NAf. 1,780 per month.
The Court also ordered SMHDF to pay Lynch’s legal costs, which were estimated at NAf. 2,556. There were no penalties attached in case of non-compliance. Lynch had called for damages to the tune of NAf. 45,000.