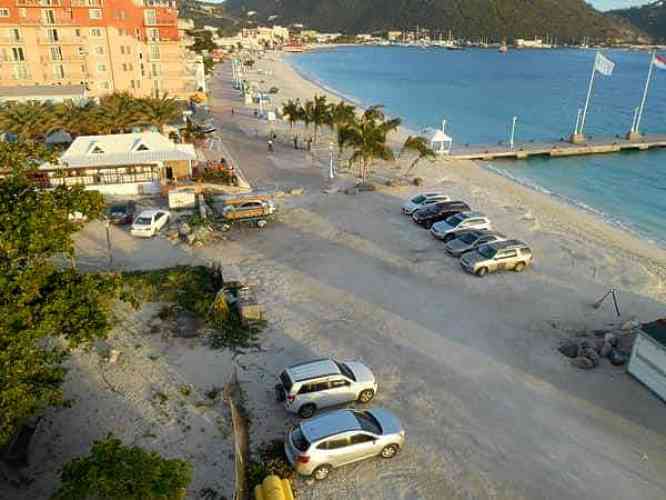 PHILIPSBURG–The Court of First Instance on Friday issued a ban on parking on Great Bay Beach near Walter Plantz Square. The Judge made this decision in an injunction filed by Ocean’s Home Owners Association against Country St. Maarten, Port of St. Maarten Holding Company N.V. and the ministers of Public Housing, Spatial Planning, Environment and Infrastructure VROMI and of Tourism, Economic Affairs, Transportation and Telecommunication (TEATT).

Country St. Maarten was ordered to prevent cars from driving and parking on the beach within 30 days “for now and in the future,” in particular by closing Schuinesteeg/Pompsteeg at the beach entrance, in such a way that no more cars can enter the beach. In case of non-compliance, Country St. Maarten would have to pay daily penalties of US $1,000 to a maximum of $1 million.

As the owner of this stretch of beach, the Port was sentenced to pay the Association’s cost involved with the legal proceedings, which was estimated at NAf. 2,043. The Court declared the case against the ministers inadmissible.

Ocean’s Building, at 167 Front Street, caters to tourists, offering timeshare and rental of apartments. Ocean’s is located near Walter Plantz Square, which the Judge described as a “little square meant for tourists and residents of St. Maarten. On the square are beautiful palm trees and there are fountains where children can play. Around the square little houses have been built that exude a cosy Caribbean atmosphere.”

Nearby there is a jetty from which cruise passengers sail back and forth on tenders to spend time on the beach or in the square. After the opening of Walter Plantz Square government temporarily allowed parking on the beach between the jetty and the beach adjacent to Ocean’s. Vehicles can reach the beach via Schuinesteeg/Pompsteeg.

The Judge stated in the verdict that he had observed that this stretch of beach is extensively used as a parking spot, both during the daytime and at night, especially during weekends.

He said it is common knowledge that Philipsburg has too little public parking. “Cars are parked on the sidewalk everywhere without government doing anything about it,” he stated.

Ocean’s Home Owners Association corresponded extensively with various government entities from 2015 to date about the beachside parking, which they claim poses a danger to residents and causes nuisance.

“We have nine apartments here and we have guests that complain all the time about not wanting to sit in a parking lot. They came here for the sun, sea and beach,” Ocean’s Building Property Manager Ankie Nieuwenhoven told The Daily Herald in December 2015.

A meeting was held between stakeholders on June 9, 2016, to discuss the problems and to come to a solution. In this meeting Ocean’s, St. Maarten Nature Foundation, TEATT and the Port agreed that parking would not be allowed on the beach in front of Ocean’s; that the temporary beach parking would not exist for more than two years; and that alternatives were to be sought for a permanent parking space.

According to the Association, nothing came of these agreements. Therefore, they sent a letter on June 21, 2018, in which they demanded that the temporary parking space on the beach be closed. No response was given, after which Ocean’s initiated legal proceedings.
In the injunction, Ocean’s legal representative attorney Monique Hofman-Ruigrok of Bermon Law Office called on the Court to issue a stop to the driving and parking of vehicles on Great Bay Beach in front and directly adjacent to the apartment complex within 10 days after a verdict and to prevent any future beach access to automobiles by issuing daily penalties of $10,000, in case of non-compliance.

Ocean’s also requested the Court’s permission to take the necessary measures itself to prevent parking on the beach in front of and right next to Ocean’s complex.
Country St. Maarten and the ministries, which were represented by attorney Aernout Kraaijeveld and the Harbour’s legal representative Jojanneke Deelstra, both had called on the Court to declare the Association’s claims against their clients inadmissible.

Claims made by the Port that the beach parking lot was not part of the beach but of the public road were dismissed by the Court, as the Port and the government had failed to provide any evidence or government decision to corroborate this statement.
It may be derived from the official Beach Policy that beaches are not intended to be parking lots. According to the Court, government had never formally made a decision to designate the contested stretch of beach as a temporary parking space.

The VROMI minister sent a letter to the Ombudsman on November 26, 2015, in which he promised to permanently prevent cars from driving on the beach from early 2016.
“Nothing has come of that intention, nor of the agreements made on behalf of the TEATT minister on July 9, 2016,” the Judge said, which led him to the conclusion that government was in neglect and should prevent vehicles from parking on the beach.

During the hearing of the injunction, government objected to the closure of Schuinesteeg/Pompsteeg because emergency services vehicles require beach access.
However, the Court noted that several alleys in Philipsburg are closed off with concrete barriers, without this being considered an impediment for emergency vehicles. Auxiliary vehicles may also reach the beach via Boardwalk Boulevard, which is frequently used by police cars and other public services, the Judge stated in the verdict.
Government had pleaded with the Court not to impose penalties, or to lower the amounts.

“Country St. Maarten is in bad financial shape and taxpayers should not suffer by bearing the brunt,” government’s lawyer had said.

The Court responded by stating that government should be expected to comply with judicial decisions without the threat of periodic penalty payments being necessary.
“Unfortunately, in St. Maarten, the government regularly disregards court rulings, even if provided with periodic penalty payments. With this, government itself puts the Court in the position that penalties must be imposed so that the person seeking justice is given a means of power to force the government to comply with Court rulings,” the Judge stated.