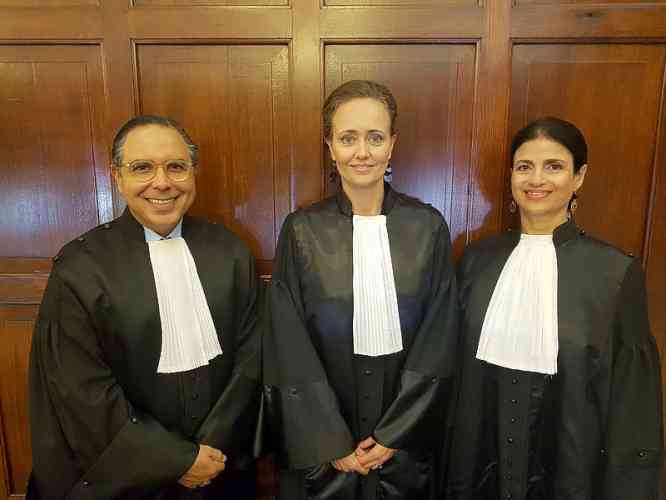 WILLEMSTAD–New Judge at the Joint Court of Justice Faye Wannyn was officially installed during an extraordinary sitting of the Court in Willemstad on Friday.

Wannyn was born on November 24, 1976 in Sliedrecht, the Netherlands. She studied law at the Erasmus University in Rotterdam. In 2000, she first came to Curaçao with the intention to spend a few weeks to write her thesis about the prison.

Instead of weeks, she stayed for months. She delayed her return until her mother summoned her back after three months to come to the Netherlands to graduate.
She returned around the Christmas holidays dressed in her summer clothes in which she had to defy the Dutch winter cold. At that moment, she wanted to return on the same flight back to Curaçao.

After her graduation Wannyn travelled to Curaçao again with the intention to settle temporarily. However, things went differently, because after that she never left Curaçao anymore, except for business trips and vacations.

After a brief stint as management assistant at the Curaçao Seaquarium, Wannyn started her legal career as a court secretary in 2003.

Eleven years later, it was time for her next step. She applied for a training placement as a judge and started on January 1, 2015, with the so-called Rio training at the Court in Curaçao, which she successfully completed last year. At the moment she is working as a civil judge at the Court of First Instance.

Court President Saleh said in her installation speech that Wannyn’s colleagues have attributed her the following positive qualities: “Faye is always herself. What you see, is what you get. Faye has heart for the organisation and is very loyal to her colleagues. As a judge she is straightforward, realistic and practical, thanks to one nice combination of features: thorough, curious and openminded. Although Faye was not born and raised here, she is a child of the island.”

Wannyn is firmly rooted in Curaçao’s community. She speaks Papiamentu fluently, has two sons who were born on the island and she’s an avid Carnival reveller.

Attorney General Bos congratulated judge Wannyn with her start as a judge in the Caribbean region. “There is more than enough work to do and we are anxiously awaiting judges who, together with us, ensure that cases are handled carefully, understandably and quickly at the various sittings here and in Aruba, Bonaire, St. Eustatius, Saba and St. Maarten.”

Bos said a timely handling of cases is of great importance. “In the newspapers in the Netherlands concerns were mentioned last week about the workload of prosecutors and judges. St. Maarteners recently demonstrated against the long duration of criminal proceedings and offered a petition for a timely trial of these cases. Matters must be handled carefully and energetically,” the Attorney General stated.