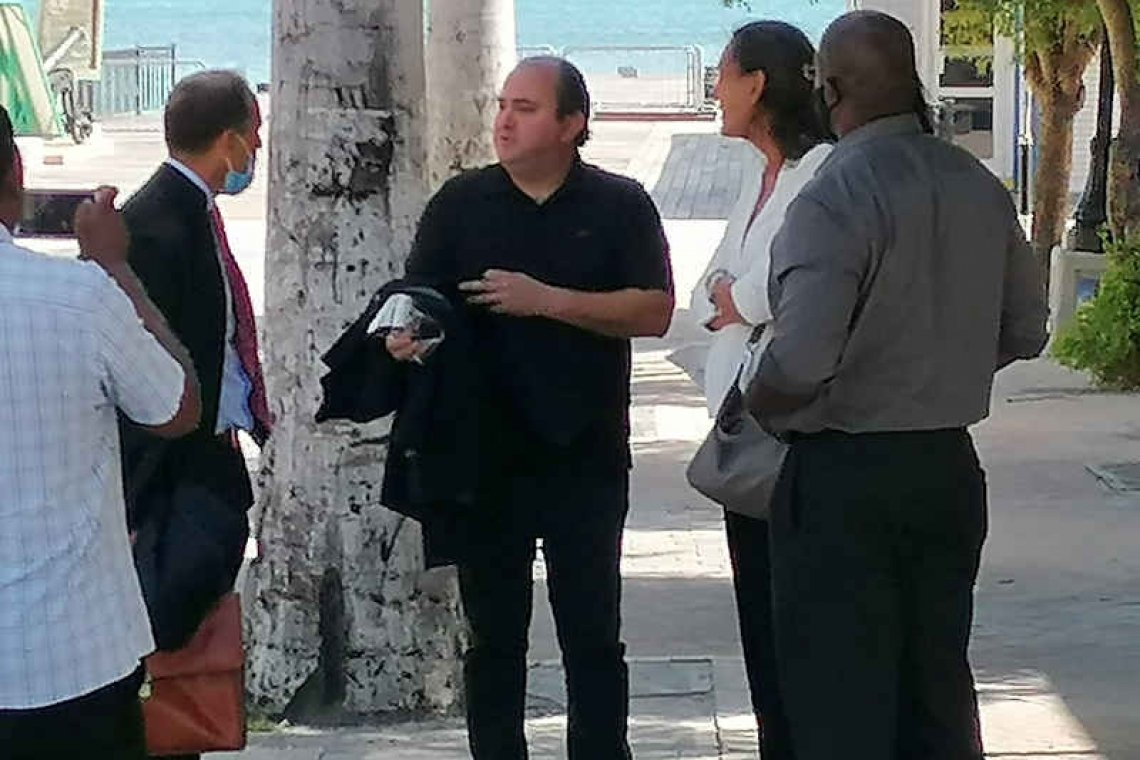 CAY HILL–The Judge in the Court of First Instance will give his decision in the injunction filed by Learning Unlimited (LU) Preparatory School against Country St. Maarten pertaining to Wednesday’s police order to close the school, today, Friday, no later than 5:00pm.

LU opened its doors Wednesday to welcome its students back to school as scheduled for the new 2020/2021 school year. As pupils arrived on campus to attend their first day back several police officers were present to inform the school that it would have to close its doors.  According to Head of School Daunesh Alcott and LU’s legal advisors attorneys Lucas Berman and Emmely de Haan, the government officials had tried to close LU’s premises without invoking proper legal grounds and/or following correct procedures.

Attorney-at-law Caroline van Hees, who represented the Ministries of Education, Youth, Culture and Sport (ECYS) and of Public Health, Social Development and Labour (VSA) in the injunction, said the government was entitled to order the school’s closure due to the current spread of the COVID-19 coronavirus in St. Maarten.

LU was very displeased with the way in which VSA Minister Richard Panneflek had asked the Chief of Police a “favour” in preventing the opening of the private school. ‘Tears and consolations’

“The lion’s share of the police force showed up on the LU site. The school board was told that the school was not allowed to open and with a big display of power parents and children were prevented from entering the school building,” Berman said in his pleadings.

The officers disregarded the rules of social distancing and the children were so upset that LU’s carefully crafted safety plan ended up in the trash can.

“‘Stop-and-Drop’ was the intention, the reality – thanks to the police force – was a true people’s riot with tears and consolations,” Berman told the Court. Children of five and six years old were yelled at by the police that they should go home, he stated.

According to Berman, the chief of police did not go as far as to order the school closed, because there was no legal basis for such a decision. Also, Minister Panneflek, who visited LU on Wednesday and who was in Court to witness the proceedings, had failed to provide a ministerial decision. He also did not order the school’s closure, but eventually “backed off,” LU stated.

According to the school, Panneflek had overstepped the boundaries of his authority in ordering the closure of LU’s primary and secondary schools, which Berman asserted, will remain closed until the Court has presented its decision in this case.

“The National Police Ordinance only gives the minister of Justice and the Prosecutor’s Office the authority to direct the police. The appropriate course of events is that the minister must make a decision and if the school does not comply, the Justice Department should act and not VSA,” LU’s lawyer said.

Furthermore, the private school claims that government does not hold any authority over it, except where it concerns general (fire) safety requirements and the guarantee of quality education.

Attorney De Haan pointed out that there are no contaminations with the coronavirus at LU and that the school has introduced protocols to immediately isolate any contamination to prevent any danger to public health.

LU had also followed the recommendations of the Netherlands Institute for Public Health and the Environment RIVM, “and in some areas even more stringent than necessary.” ‘Panic football’

Contrary to government, LU does not consider online learning a “sustainable” alternative for on-site education for 250 pupils. “Pupils run the risk of serious learning disadvantages and parents can hardly, if at all, combine schooling at home with their work.”

The risk of infection among children would also be considered negligible by leading health authorities, including the RIVM, De Haan stated. “In the Netherlands, too, classroom education is provided without any measures,” she said.

“The executive branch plays panic football and has completely lost sight of the human dimension here,” LU stated in asking the judge to make an end to “arbitrariness” and to ministers taking the law into their own hands.

Government’s lawyer Van Hees said that based on ministerial decisions of July 31 and August 11, LU may only open for E-learning. “It is not up to LU to decide whether public health is at risk or not,” she said.

Van Hees said that government has the authority to act, the minister of Public Health has the obligation of care and the authority to close certain areas for health reasons, including businesses and schools.

The ministries of ECYS and VSA, who declined to provide information about any possible contamination with the coronavirus at LU, stated that St. Maarten is currently confronted with increasing numbers of contaminations.

According to LU, there are no active COVID-19 cases with a connection to the school.

“COVID is rapidly increasing and the situation changes every day. Especially youngsters are currently a vulnerable group in contracting the virus, and this could also include students of LU. Opening schools is too risky,” Van Hees said, point in case being that among those with corona in St. Maarten are two children who are seriously ill.

Already on May 29, LU was requested to submit a safety plan, which had only been submitted to VSA one day before the school opening. The government’s lawyer said that several elements in the plan were lacking and that prior to the school opening inspectors should have had the opportunity to inspect the premises.

Van Hees said that E-learning may not be the best option, “but it is necessary considering the current threat by the number of active cases which are increasing daily.”

She called upon the Court to decline the school’s demands. “LU may not open its doors for students, parents, teachers and others,” she said emphatically.

The coronavirus is a real threat, Minister Panneflek said at the end of Thursday’s hearing. “People need to be protected, also against themselves. Children need to be protected. … We need to take care of the public health of everyone. This is a case of life and death.”