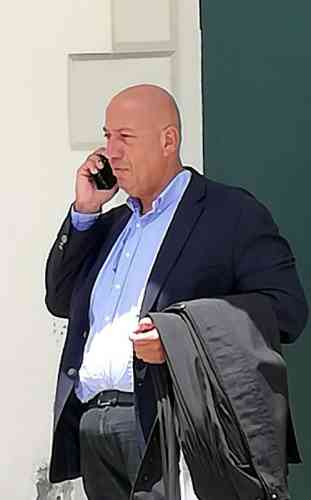 PHILIPSBURG–The appeal of Former Member of Parliament (MP) Silvio Matser (51) against his conviction in absentia by the Court of First Instance in February did not lead to a different judgment, it appeared on Wednesday.

Similar to the previous verdict in his case, Matser was sentenced to eight months, two of which were suspended, on two years’ probation, as he was found guilty of buying votes among eligible inmates of the Pointe Blanche prison while campaigning for the August 2014 parliamentary election. He was also banned from running as a candidate for five years.
Defendants have the right to be present at their hearings, and as Matser had been absent during all four hearings in the case which led to his conviction earlier this year, he was entitled to a re-trial.

The former candidate on the United People’s (UP) party slate indeed made his first appearance in this case on Wednesday, September 5, during which he denied the allegations, and the Prosecutor called for a prison sentence of two years and a five-year ban from passive suffrage.

Under the new electoral law, which came into effect in 2015, electoral bribery carries a maximum penalty of two years. However, the Court did not impose the maximum penalty, as this is reserved for violations of the “worst kind,” as the Judge put it.

Matser did not show up yesterday to hear the Judge pronounce the verdict, because he was “nervous,” his lawyer Cor Merx explained to the Court.

The Court held Matser, who was convicted in 2015 of a fiscal crime, as a co-perpetrator in the vote-buying case in which he had made use of secret information which he had obtained “illegally” from the acting prison director.

“He also was the primary stakeholder in this crime, directed against the foundation of parliamentary democracy, namely that not the best or the most convincing candidate is elected, but the one with the most resources. At the same time, he has defiled the appearance of the democratic order of Country St. Maarten,” the Judge stated in the verdict.

The Prosecutor’s Office not only considered vote-buying proven in the so-called “Octopus” investigation, which involves 20 suspects in total, but also that Matser was a leader in a criminal organisation comprising his campaign-team members.

However, the Court followed the defence in this matter. The Court found it proven that Matser had cooperated with suspect R.G.K. in bribing eligible detainees of the Pointe Blanche prison. To this effect they made contact with several inmates who were members of the Inmates Association. However, the Judge did not consider it plausible that the Inmates Association’s members were part of a criminal organisation under Matser’s “hierarchic” leadership.

Matser had denied that he had obtained a list of 80 eligible detainees from Pointe Blanche prison Interim Director Edward Rohan and denied he had an election campaign team for the 2014 election that primarily consisted of inmates who had recruited votes among the prison population.

Rohan, who was previously convicted for his role in the scheme, had told the Court that he had not only provided Master with such a list, but also other candidates – Roy Marlin, Franklin Meyers, Frans Richardson and Maurice Lake.
In exchange, those voting for Matser received US $100 in prison canteen money, the Court found.

Matser was acquitted of making promises to two inmates to provide them with a taxi licence and a beach-vendor permit respectively.

Investigations into the results of the 2014 election revealed that UP leader Theo Heyliger was the biggest vote-getter of his party in 19 of the 20 voting districts, except in district #19 – the Pointe Blanche prison – where Matser attained the highest number of preferential votes.

The Court also pronounced the verdicts in the cases against three inmates. In accordance with the Prosecutor’s demand, Franklin Luciano Ash (48) was acquitted of involvement in vote-buying among his fellow-inmates. Julio Jermain Boasman (30) and Ricardo Frederick Alexander York (33) were both sentenced to three months suspended, on two years’ probation, and $100 fines.