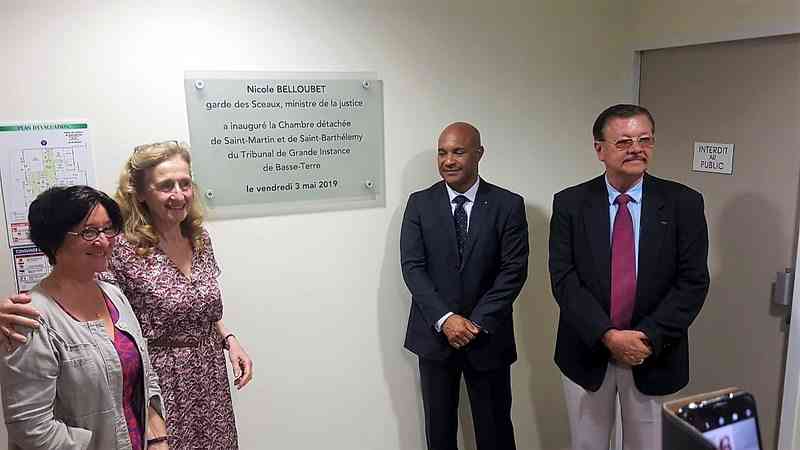 Justice Minister Nicole Belloubet unveiled the plaque at the inauguration of the Chambre Détachée in Marigot on Friday in the presence of Tribunal de Grande Instance de Basse-Terre President Marie Bart (left) and the respective Presidents of the two Collectivités, Daniel Gibbs and Bruno Magras. (Robert Luckock photo)

MARIGOT–French Justice Minister Nicole Belloubet inaugurated the Chambre Détachée of the Tribunal de Grande Instance de Basse-Terre in Marigot on Friday during short official visits to St. Martin, Guadeloupe and Martinique. Her visit was delayed by a week due to President Macon’s announcements on the Grand Debate.

Belloubet unveiled the plaque in the foyer, assisted by Gibbs and Magras, before the speeches.

Already functioning and situated adjacent to the Palais de Justice in the former public library, the detached chamber was created by ministerial decree on December 31, 2015, and promised for St. Martin and St. Barths by former President of the Republic François Hollande on his official visit in May 2015.

The Executive Council had voted in 2016 on a motion to exchange land with the Ministry of Justice, which resulted in the Collectivité relinquishing the former public library in exchange for the Gendarmerie building in Concordia.

The objective of the detached chamber was partly to relieve the workload on the court in Guadeloupe by treating cases directly in St. Martin that normally would be dealt with in Guadeloupe. In 2016, the then Director of Judicial Services noted that 40 per cent of criminal litigation and 30 per cent of civil litigation at the Tribunal de Grande Instance of Basse-Terre originate from St. Martin. Of 6,000 cases to be prosecuted, 2,300 concerned St. Martin.

Consequently, the detached chamber in St. Martin comes with magistrates, investigating judges, clerks of the court and other necessary staff, reducing the need for judges, lawyers and victims to travel back and forth between St. Martin and Guadeloupe. It was also envisaged to have immediate trials (comparution immediate) twice a week.

In her introduction, Tribunal de Grand Instance de Basse-Terre President Marie Bart, noted St. Martin is the sixth detached chamber to be opened in France and second in the overseas territories. She also acknowledged the contributions made by the respective Collectivités of St. Martin and St. Barths of 150,000 euros each towards the transformation of the public library into a detached chamber.

Gibbs noted in his remarks the increase in the number of judges, saying the court has now become a “real” tribunal. “The proximity of justice is now becoming reality and the means for administrative justice have been strengthened,” he said.

However, he added, there is still a substantial lack of other judicial structures and access to rights.

“There is still considerable room for improvement if access to rights is to become reality, as it is everywhere in France. I think of the need to strengthen victim support systems, availability of budgetary and human resources to combat violence against women, and application of procedures to prevent rental evictions. I hope the Justice Ministry will hear this appeal,” he said.

Gibbs also mentioned three other points that he originally addressed in a parliamentary report five years ago:

Judicial cooperation between the two sides of the island where it is hoped more effective cooperation procedures can be defined in the coming months with the Ministry’s services and support of the Ambassador Delegate for Regional Cooperation.

Establishment of an educational home with the support of Directorate of Judicial Protection of Youth. This would significantly improve efforts to prevent and combat juvenile delinquency, which is still a constant cause for concern, he said. Currently there is no reception structure for juvenile offenders, who are still sent to Guadeloupe.

The third point concerned a prison for St. Martin. Gibbs noted St. Martin is the only territory with a population of 40,000 not to have a penitentiary. Much smaller territories such as St. Pierre et Miquelon and Wallis and Futuna have a prison.

“I would therefore like, perhaps at the end of an in-depth mission by the General Inspectorate of Justice, for the State to commit itself to construction, within 10 years, of a prison for St. Martin, adapted to the territory, and using resources from the Guadeloupe Penitentiary Service for integration and probation.”

Belloubet confirmed there are no current plans for a prison in St. Martin, but prison services in Guadeloupe will be improved due to a national increase in human resources. Responding to Gibbs’ comments about the prison, she joked she would have “10 years” to consider the request.

She also disclosed that Chambres Détachées will disappear as of January 1, 2020, due to a new law on organisation and the Chambre Détachée in St. Martin will hence become “Chambre de Proximité de St. Martin and St. Barths.”