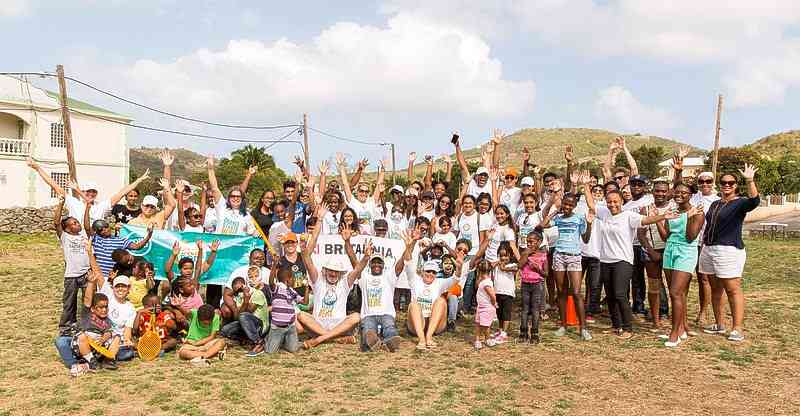 PHILIPSBURG–K1 Britannia Foundation recently celebrated its fifth anniversary, having been established as a maritime foundation locally on February 27, 2014. K1 has grown to carry out several charitable projects in the fields of disaster relief, foster care, volunteerism and second chance – helping vulnerable and at-risk youth.

Co-founder Priya Thirumur introduced the basis of the foundation through conversation with the Court of Guardianship that highlighted the need to support vulnerable and at-risk youth. Five years later, K1 has grown to encompass a network of passionate team members, dedicated local and international volunteers, and unwavering partners who strive to create solutions for evolving challenges faced by vulnerable youth.

A large part of who and what the foundation is today is its volunteer programme. Programme Manager Iris Hakkens jump-started the volunteer programme in 2014 with the hope of getting the people of St. Maarten active in creating solutions for issues on the island. K1 opened up the programme to anyone looking to get involved, but mostly attracted a lot of creative young students wanting to be a part of the solutions.

Atoya D’Aguiar, one of K1’s consistent volunteers, said on Sunday, “Volunteering has changed my life by connecting to others. It’s good for your mind and body and brought fulfilment to my life. While volunteering with coach Tom Burnett at Player Development, I got an opportunity to prove myself, meet people and gain a father.”

Coach Tom Burnett of Player Development, beneficiary of the programme, stated, “K1 is an amazing group of young people who freely volunteer their time and energy to make the community a better place. At Player Development they read with the children, play with them and help the children grow.”

The Foster Care programme has been a very large part of K1 since the beginning. As these children are some of the most vulnerable in society, K1 aims to provide them with mentorship and experiences to aid in their personal development.

“The purpose of the programme is to provide experiences to improve their emotional, social, and problem-solving skills, but also to guide them through positive role modelling,” said Burnett.

In its early years, when K1 Britannia Foundation focused closely on working with foster homes, the foundation then partnered with the Court of Guardianship to also mentor children in and transitioning out of the justice system. This transformed into what is today K1’s Second Chance programme, which is tailored to this group of youths to provide them with a “second chance” at life. K1 has been involved with a large number of youths, assisting with job training, social development and mentoring.

Tony Dunkerly, alongside with K1, started the Work, Training and Social Development Programme (WTSD), for 16- to 18-year-olds to provide them with the tools and training needed to become dynamic members of society.

Former Court of Guardianship director Richelda Rodriguez- Emmanuel said, “K1’s Second Chance programme, a first of its kind, is able to help children transitioning from the justice system. This programme has given them the opportunity to grow, develop and receive various certifications in job training. I have personally seen youth through the Court of Guardianship grow and develop from this programme, in very personal ways.”

For the first time last year, K1 was able to send a youth, King, abroad to the UK. As part of the pilot programme, King is taking part in a one-year apprenticeship in boatbuilding and other maritime training. This programme is also in conjunction with K1’s Scholarship Fund, which has been set up to award training opportunities for local youth who cannot otherwise afford them.

K1 has also worked with Kidz at Sea to provide youth with maritime training; nine youngsters have now graduated and gone on to work in the maritime field. Ongoing at this time is a fully-sponsored carpentry course that was made possible by K1 in collaboration with National Institute for Professional Advancement (NIPA), and sponsors such as Holland America Line, the Netherlands Disaster Fund NRF, and Menzies Aviation to give youth the opportunity to advance in the construction field.

Saro Spadaro of The Maho Group said, “With compassion at its core, K1 Britannia Foundation is an organisation that The Maho Group is proud to support. From their unwavering humanity and heart – especially toward children, who are the pillars on which our society will move forward – the organisation and its leaders are committed to consistently exceeding the fellowship that defines our very community here in St. Maarten.”

K1 has also set up a mentorship programme over the years and sustained the annual Christmas Angels Programme that started in 2014. The programme has become a tradition that encourages the community to take part in giving back to the most vulnerable in the community.

The devastation in St. Maarten caused by Hurricane Irma opened a gap and a role which needed to be filled right after the storm hit. K1 and its volunteers worked closely with the Coast Guard, government of St. Maarten and other entities to provide relief and aid to those who needed it the most. From this, K1 has now set up an official disaster relief team called K1 DIRECT in St. Maarten and Curaçao.

K1 Britannia Foundation has thanked all its partners, sponsors and volunteers who have contributed to the foundation’s growth. Co-founder Thirumur concluded, “K1 has always been a youth-driven organisation, full of life, fire, and ideas. The ones that keep K1 alive are truly the heart of the foundation. There is no end to what is possible, what challenges can be tackled, what lives can be changed and who may be inspired. We are humbled and ecstatic to have reached this milestone.”

K1 looks forward to its continued journey of engaging the community and providing solutions for those who need it most. For more information about K1 Britannia Foundation, visit its website

www.k1britanniafoundation.org, send an email to