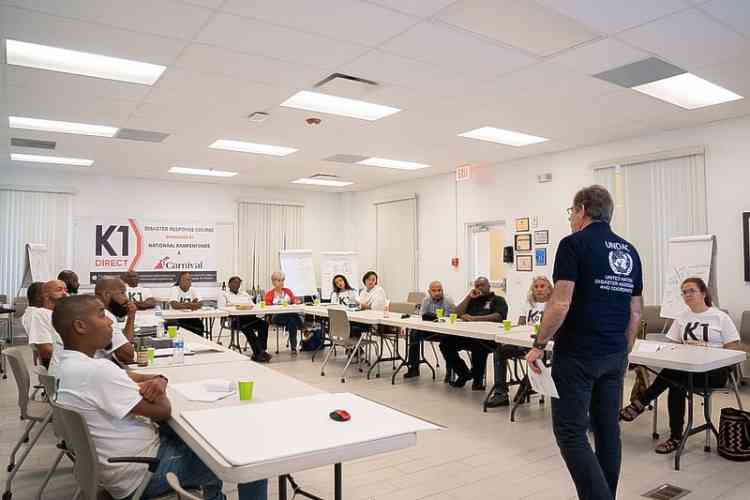 PHILIPSBURG–K1 Britannia Foundation marked the first anniversary of K1 DIRECT – Disaster Relief & Crisis Team, since its launch back on September 6, 2018. Since then, K1 DIRECT has been partnering with local, regional and international disaster relief initiatives and organisations, and has grown to a team of over forty volunteer members based in St. Maarten and in Curaçao.

The decision to develop a branch in Curaçao stemmed from the island’s strategic location outside of the hurricane belt and its social connection to St. Maarten.

K1 DIRECT has been training in various fields of disaster management to assist the disaster relief structure of St. Maarten and other islands through its main tasks of shelter management, first response and distribution management in the region, amongst others.

In 2018, a year after the passing of Hurricane Irma, K1 DIRECT – Disaster Relief and Crisis team was launched to assist with the need for trained and equipped responders immediately before, during and after a disaster, according to a press release.

response and distribution management – and is working closely with the St. Maarten government’s Emergency Support Function 7 (ESF7) to make the necessary preparations to continue to effectively fill this role, which include a Memorandum of Understanding (MoU) to specify clear roles and key areas in which K1 DIRECT will assist, the organisation said.

Carnival Cruise Line has also partnered with K1 DIRECT, as the founding sponsor, to support the team for disaster relief because of its affiliation with Caribbean region.

“Knowledge is one of the most valuable resources to share,” said K1 DIRECT Program Manager Iris Hakkens.

The training brought together partners in disaster and supply chain management, where organisations had the opportunity to present their disaster response capabilities; participate in supply chain, logistics and inventory management activities; and discuss collaboration and long-term agreements.

Throughout the year, K1 DIRECT has also facilitated several trainings for its team including on fire safety and psychosocial support in disasters as well as medical trainings. The St. Maarten and Curaçao members are certified with the American Heart Association’s Heartsaver First Aid/CPR/AED qualification and a select number are also certified as Emergency Medical Responders. Volunteers are also being vaccinated with relevant immunisations to prevent illness while traveling to catastrophic and vulnerable areas.

K1 DIRECT Program Managers Priya Thirumur, Hakkens and Alan Schet said the organisation has been working diligently to strengthen connections and partnerships with key humanitarian organisations in the region.

This last portion was deleted from the published version:

“Over the last year, the knowledge and practices gained through managing groups of people, managing partnerships and expectations, and participating in trainings have been pivotal in strengthening my confidence in our team,” said Hakkens.

“Since K1 DIRECT’s inception, I also have noticed the trust and credibility we’ve gained. The fact that we are seen as a dependable organisation and team, is a positive step we’ve realised,” said Schet.

K1 DIRECT also attended the Understanding Risk (UR) Caribbean Conference in Barbados, which brought together over 500 representatives in disaster risk reduction, where Thirumur participated in a panel on disaster communications.

The conference served as a point to connect with governments of different countries and international organisations such as WFP and Pan American Health Organization (PAHO).

“K1 DIRECT’s current role and the role it will play for many years to come, is one of the beautiful things out of the difficult experience that [Hurricane – Ed.] Irma was. K1 Britannia Foundation has always endeavoured to foster out-of-the-box solutions to meet evolving needs, and this is what led to the creation of K1 DIRECT.

“Another principle that this programme is built on is collaboration and strengthening communities through meaningful partnerships.

“Looking back at this year, we are very grateful for all those who have played a part in its creation and we look forward to be able to continue to serve the region for many years to come,” said Thirumur.

In a press release, K1 extended its gratitude and appreciation to partners that helped with the team’s growth and expansion. K1 also acknowledged Carnival Cruise Line and the Nationaal Rampenfonds (NRF) for their sponsorship that led to the establishment of K1 DIRECT.

For more information about K1 Britannia Foundation and K1 DIRECT, persons may visit their website at

www.k1britanniafoundation.org or send an e-mail to