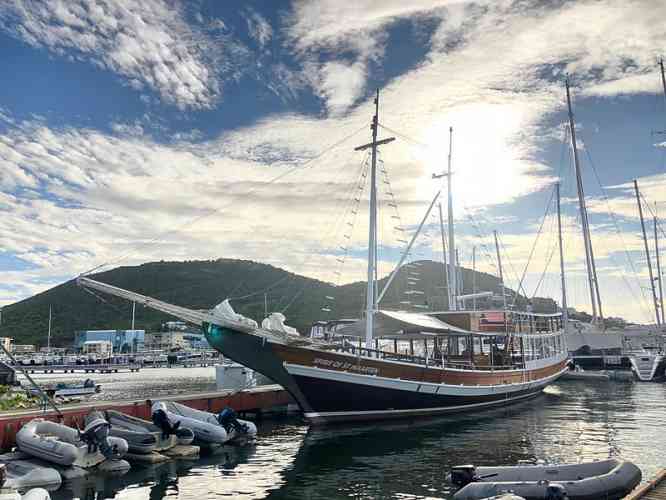 Spirit of St. Maarten is based on a social enterprise business model, said K1 in a press release on Sunday. K1 also said the goal of the project is to enable non-profit organisations to achieve sustainability, and financially support themselves in innovative ways instead of relying solely on grants and donations. The schooner will employ youth in maritime, as well as in hospitality, and “thus create a holistic approach to support vulnerable youth through several aspects,” according to K1.

The vessel is “a long-term solution for sustaining projects, through partnership with the maritime and tourism industry to offer day-cruises, night-cruises and charters on this flagship. Proceeds gained through this, are to help sustain charitable projects on the island,” said K1.

The launch took place at Lagoonies Bistro in Cole Bay, where K1 Britannia Foundation Vice President Priya Thirumur and K1 Britannia Foundation Programme Manager Iris Hakkens gave a presentation of the foundation’s projects over the last year, including a recap of its deployment to the Bahamas. The presentation ended with the announcement of the new social project and a tour of the schooner.

“Spirit of St. Maarten is not a K1 project, it is an island project. This is why we have decided to call the boat the Spirit of St. Maarten, as a flagship for programmes with the island’s youth and to find long-term solutions for social challenges faced by those on this island. It has been warming to see the support of the community, the maritime community, coming together to bring this very special flagship to life,” said Thirumur.

Prime Minister Silveria Jacobs was also at the launch. She commended the members of K1 Britannia Foundation and K1 DIRECT for their service. “The tenacity of each volunteer is very admirable and I cannot wait to see what their next project will be,” said Jacobs.

According to K1, since its incorporation in 2014, its focus has been on providing developmental and educational opportunities for vulnerable and at-risk youth through a wide variety of programmes.

Building on its volunteer programme, K1 combined volunteerism and disaster relief in the aftermath of Hurricane Irma in 2017, which later evolved into an official disaster relief programme called K1 DIRECT. This was assisted by Carnival Cruise Line and Holland America Line. K1 said it was this relationship with the cruise industry that inspired the idea to develop a maritime social business model that could be contracted by cruise lines.

“K1 would like to share its utmost gratitude to persons who made this project possible, including partners like Electec, FKG, Lagoon Marina, Lagoonies, Intermar, Budget Marine, Island Water World, Yanmar, Dave Dowling and Mark, Nexus, Bobby’s Marina, Carnival, Emilio and Erin Johnson, PDG, Grant Thorton, Marine Couture, and many others,” said K1 in the press release.

For more information on Spirit of St. Maarten or K1 Britannia Foundation, persons are asked to visit its website

www.facebook.com/k1sxm. Persons can also send an e-mail to