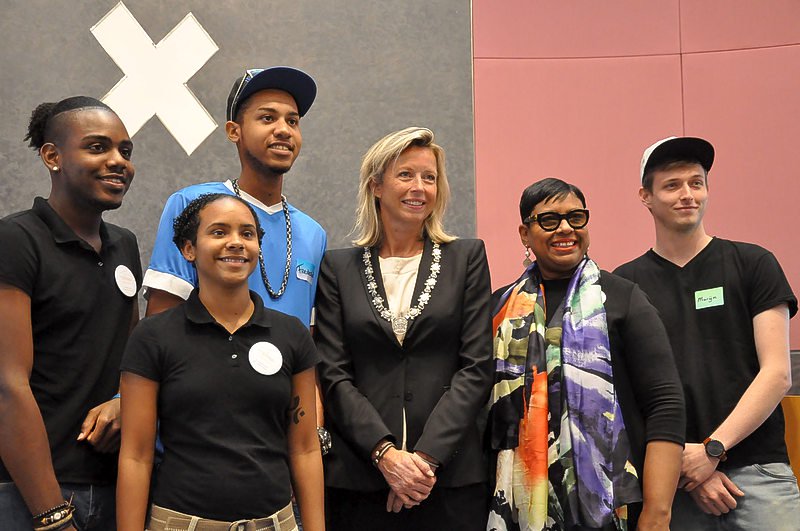 Amsterdam’s Deputy Mayor and Alderman Kajsa Ollongren (fourth from left), seen here with students from the Caribbean Netherlands and their coach Roos Leerdam-Bulo during a welcoming ceremony in Amsterdam on August 24 this year, has been named as the next Minister of Home Affairs and Kingdom Relations. (Suzanne Koelega photo)

THE HAGUE–Amsterdam Deputy Mayor and Alderman Kajsa Ollongren might very well become the next Minister of Home Affairs and Kingdom Relations in the new Dutch Government, the Dutch media reported on Wednesday.

According to reliable sources, Ollongren (50), a member of the Democratic Party D66, has also been asked to take up the position of Vice-prime Minister in the Rutte III cabinet. She will take over the portfolio of Home Affairs and Kingdom Relations from Ronald Plasterk of the Labour Party PvdA, who has been Minister since November 2012.

The reported move of Ollongren to The Hague means that she will no longer be available as Deputy Mayor of Amsterdam. She has been taking over the tasks of Mayor Eberhard van der Laan who died on October 5 from lung cancer.

Commissioner of the King of the province North-Holland Johan Remkes has started the process to seek a new Deputy Mayor for Amsterdam who will assume tasks within a few weeks.

Ollongren has been a member of the Amsterdam Municipal Government since 2014. Aside from being Deputy Mayor, she is an Alderman in charge of economic affairs, airport and harbour, monuments, arts and culture.

On August 24, Ollongren met with a group of some 50 students from the Dutch Caribbean, who were welcomed by the Municipality Amsterdam as they were about to start their studies in the largest city of the Netherlands. Ollongren addressed the students during the event, which has become a yearly, valued tradition.

The D66 politician is no stranger to The Hague: before she left for Amsterdam, she was the highest ranking civil servant at the Ministry of General Affairs and as such a top civil servant of Prime Minister Mark Rutte.

Before that, Ollongren worked at the Ministry of Economic Affairs. She studied economy and history at the University of Amsterdam, followed by a study at the École nationale d’administration in Paris where top civil servants are educated.

Ollongren’s candidacy as yet has to be confirmed by D66 Leader Alexander Pechtold, himself a former Minister of Kingdom Affairs. The talks with the prospective candidates are taking place this week. The Rutte III cabinet is slated to be inaugurated next week Thursday, October 26.

Former State Secretary of Home Affairs and Kingdom Relations Ank Bijleveld-Schouten of the Christian Democratic Party CDA has been named as the new Minister of Defence. Bijleveld-Schouten is currently the Commissioner of the King of the province Overijssel.