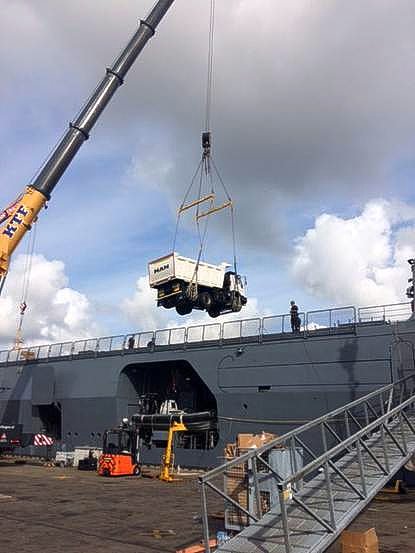 THE HAGUE–Dutch Defence in the Netherlands keeps working diligently to transport relief goods to St. Maarten, mostly via Curaçao. The large Navy transport ship His Majesty Karel Doorman was loaded in Den Helder and left for St. Maarten on Wednesday.

The Karel Doorman will also bring much needed construction material for the rebuilding and repairing of homes, schools and other vital infrastructure. For this purpose a number of bulldozers and excavators have been loaded on the Karel Doorman.

The local schools will be very happy with the school supplies, including chairs and tables, and three large pavilion tents for 36 classes that the ship has on board. Also loaded onto the Karel Doorman were containers with food, water and other relief supplies, such as toilet paper, as well as several containers with supplies that were collected by civilian initiatives in the Netherlands. The relief load was coordinated by Ministry of Home Affairs and Kingdom Relations BZK, together with other Dutch Ministries.

The 205 metre long and 30 metre wide ship arrived in Den Helder last Friday, after being called back from an international military exercise in the Baltic Sea. The ship’s crew and other Defence personnel worked tirelessly in the past few days to load the vessel. The ship left Den Helder on Wednesday afternoon.

Other large material is also deployed for the transport of relief goods to St. Maarten. An Antonov An-124, the largest cargo aircraft that Dutch Defence can make use of, flew from the Eindhoven military airport to Curaçao on Tuesday, loaded with 88 tonnes of relief goods, including two garbage trucks.

The goods from the Antonov were put on board of the two Hercules C-130, which are smaller transport aircraft that are used to carry supplies to St. Maarten. In addition to the garbage trucks, the Antonov carried four large generators, a police vehicle and food packages.

In other news, TUI Netherlands has confirmed that it will not return to St. Maarten. The airline had already planned to cease operations with its own Dreamliner aircraft per November 1 with the agreement that Royal Dutch airlines KLM will take over TUI’s passengers.

Only military aircraft have been landing at the airport for the past two weeks, aside from the occasional airline that has carried out humanitarian relief flights, including the KLM which flew to St. Maarten over the weekend to pick up evacuees. Airlines and tour operators will move to bring tourists back to the island once water, electricity and hotel capacity have been restored.