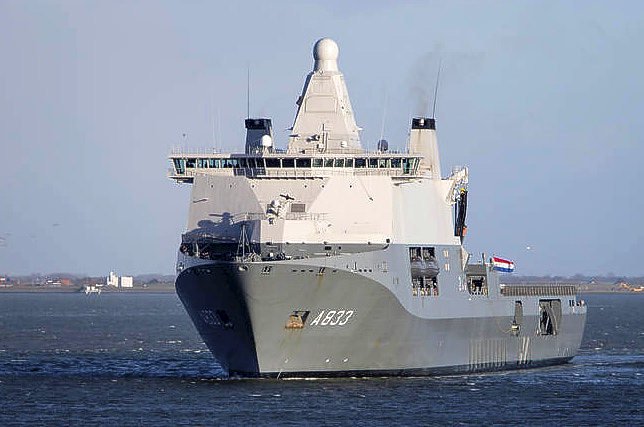 The ship will mainly be deployed for sea transport of materials and relief supplies. Karel Doorman prematurely ended its participation in the international exercise Northern Coast in the Baltic Sea and sailed to Den Helder in the Netherlands where it will be loaded with relief goods.

The ship will set sail for St. Maarten on September 20 and will arrive more or less 11 days later. Plasterk said that this was a very big cargo ship with a large helicopter platform and its own hospital.

“It is like a small city. It will bring a whole lot of supplies,” he said. Dutch Defence already has two ships in the area, the His Majesty Zeeland and His Majesty Pelikaan.

The Minister also announced that the Dutch Army is sending an additional 100 military personnel to St. Maarten for emergency repairs. They are leaving the Netherlands on Thursday. The engineers in the reconstruction team will assist in setting up emergency facilities, which will lay the basis for future structural repair works. In total, there are now more than 600 Dutch troops and police officers from the Netherlands, Aruba and Curaçao working on the island.

The complete Urban Search and Rescue Team (USAR) of the Netherlands arrived in St. Maarten on Wednesday. The four rescue teams of in total 40 persons immediately started to work, using materials of the St. Maarten Fire Department and a few building supplies that were bought locally.

The first priorities are to get the St. Maarten Medical Centre (SMMC) and the different schools fully operational. The team has set up its Base of Operations in a closed hotel in Philipsburg. The full equipment and materials will arrive Thursday morning with a cargo aircraft of the German Air Force.

The Minister said that in consultation with the Attorney-General it was decided to lock up all looters pending their Court trial, possibly this week. “Safety is essential. Not only should the people be able to feel safe, but it is also important in light of distribution of relief aid. The message must be clear: looting will not be tolerated. With districts still out of power and the streets dark and deserted with the evening curfew, we cannot have looters and robbers going around,” he said.

Plasterk did not want to go into details about the financing of the reconstruction period or provide a ball park figure of the estimated damage, which has been put by some authorities at roughly US $2.5 billion. “We are now in the emergency relief period and we will assist St. Maarten in the reconstruction trajectory. But we don’t have a big pot of money ready to send that way.”

About the cooperation with the St. Maarten Government, the Minister said that the communication was limited. “It is clear that the local government cannot manage this on its own. There is little functional government.”

Asked about the SMMC and the planned construction of a new hospital, he said that the SMMC would be part of the assessment. “It is clear that something has to be done about general medical care,” said Plasterk, who visited St. Maarten on Monday and Tuesday together with King Willem-Alexander.

Plasterk said that the people showed much appreciation that the King visited them. He contradicted rumours that the King and he were staying in luxury on the island. “We spend the night in a closed hotel [Divi Little Bay, ED.] without current and running water. We received a bucket of water and an emergency ration.”