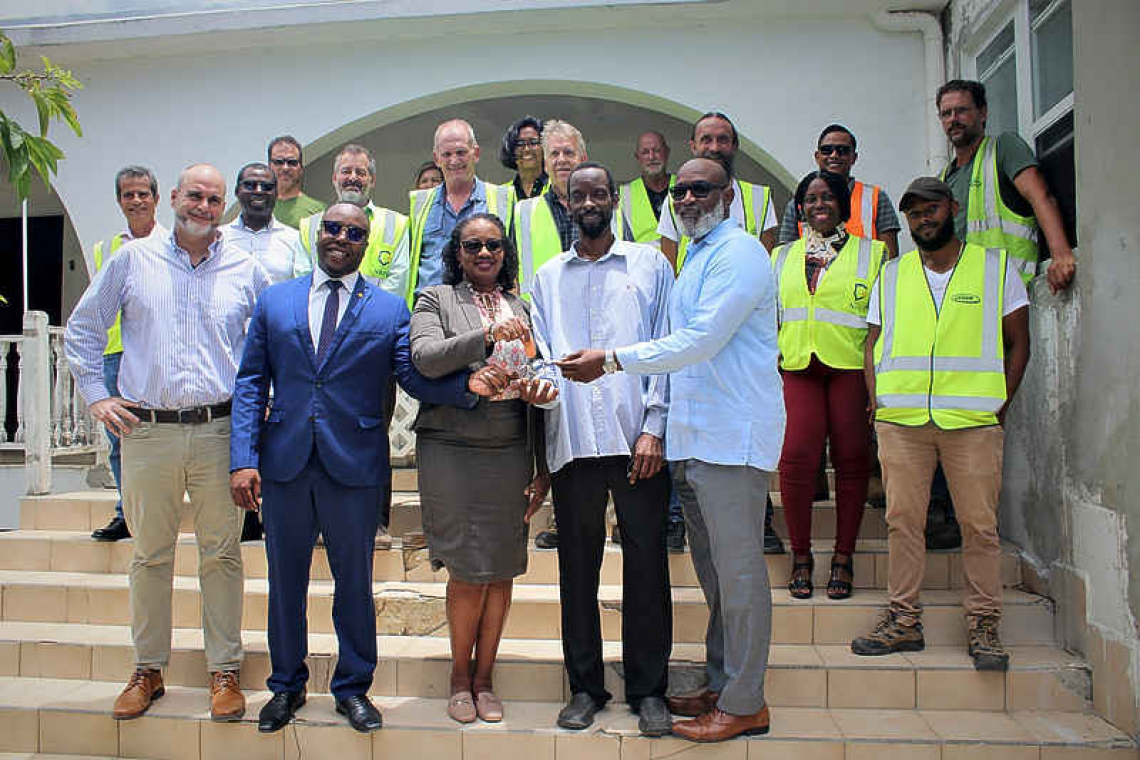 During this ceremonial gathering, NRPB Director Connor, with the assistance of Jacobs and Doran, handed over the keys to a newly repaired home to the beneficiary’s son, who accepted the keys on behalf of his mother.

The beneficiary’s home was one of the many damaged during 2017’s destructive hurricane season, which affected between 70 and 80% of St. Maarten’s local housing sector. While many homeowners have repaired their homes through hard work and determination, ERP-1’s private home repair programme focused on St. Maarten’s most financially vulnerable, such as senior citizens. Some of the programme’s eligibility criteria included the provision that homeowners could not have an income of more than NAf. 4,000 per month and that they had to have been using the home as their primary residence.

With repairs to roofs, windows, and doors – as well as some structural works for enhanced safety – the ERP-1 home repair programme has provided a safer environment for this segment of affected homeowners, following the “Build Back Better” principle.

As of August 1, 2022, exactly 160 private homes have been repaired through ERP-1, with work on an additional 18 private homes scheduled to start in the first quarter of 2023 under a new contract.

Noting the programme’s positive results, Jacobs is happy that so many families are now in more resilient homes ahead of the peak of this year’s hurricane season.
“It has taken quite a while, but we are comforted in knowing that not only is the home fixed, but precautions have been taken to weather-proof it for future potential hurricanes. We would like to help more, but with the focus on seniors we are able to help our society’s vulnerable. This mother and grandmother can finally spend the night in the comfort of her own home; if that’s not progress, I don’t know what is,” said Jacobs in a press release.

The enhanced safety features embedded in ERP-1’s home repair programme were developed in close collaboration with the Ministry of VROMI.

“The recently established building codes will help to make a more informed decision on how to rebuild after a disaster. I am delighted to be part of the handover of keys to another newly repaired home, and I urge all residents to build more resiliently,” said Doran about the need for rebuilding in a more resilient manner in light of ever-stronger Atlantic hurricanes.

Highlighting the cooperation between the Government of St. Maarten and the Government of the Netherlands, Dutch Representative Johnson said: “It’s always nice to see the results of inter-kingdom cooperation, and so far, the St. Maarten Trust Fund has been a great example of that. The NRPB is doing fine work and deserves a lot of credit for their results and continued efforts.”

“The repairs of private homes damaged during the 2017 hurricanes could only have been possible through the dedicated efforts of many stakeholders, such as the NRPB, the Government of St. Maarten, the World Bank, the Dutch government, and non-governmental organizations. I’m pleased to see the positive results that have been achieved, and our enhanced resilience is due to the tireless efforts and work of everyone involved,” said Connor.

In addition to the 160 private homes, the ERP-1 home repair program has also directly repaired 109 units of the St. Maarten Housing Development Foundation (SMHDF), while work on another 64 units of the Belvedere Towers is currently underway. Moreover, ERP-1 has provided retroactive financing for 160 units that were repaired by SMHDF immediately after the 2017 hurricane season.

For more information about ERP-1, persons can visit the NRPB’s website www.nrpbsxm.org/erp1.