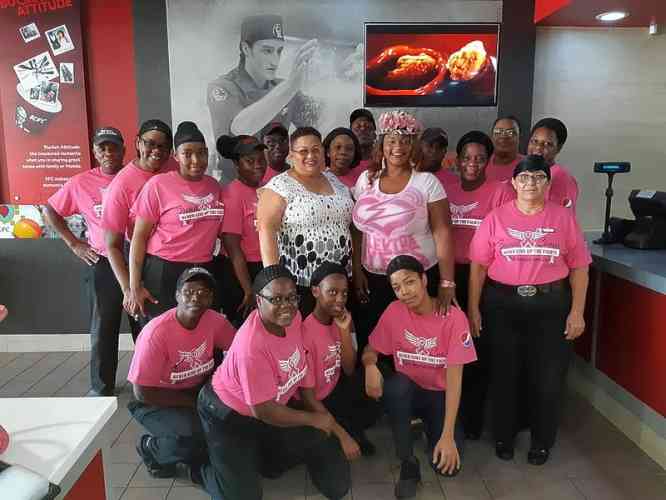 PHILIPSBURG–Kentucky Fried Chicken (KFC) joined Positive and Elektralyets Foundations in the “Feel it, Find it, Fight it” breast cancer awareness campaign and has donated 100 T-shirts in aid of the month-long campaign.

The T-shirts will be distributed to various organisations in the medical field and to breast cancer “survivors and warriors.”

This will also be the first time KFC staffers will be “going pink” for the month of October. Employees at KFC’s Philipsburg and Cole Bay locations will be wearing their T-shirts throughout this month as a reminder to customers to be “breast aware” and to get checked, it was stated in a press release.

The Positive and Elektralyets Foundations said they are “very happy” to have KFC on board to help them with their message that early detection saves lives and one should never give up the fight, as it reads on the T-shirts. The foundations thanked KFC management Derryck Jack, Anuska Brown and staff for their support.

The foundations teamed up this year and organised a number of breast cancer awareness events in October. They put everything on hold last year due the passing of Hurricanes Irma and Maria. Presidents of the two foundations Shelly Alphonso and Mercedes “Elektra” van der Waals-Wyatt said they are determined and committed to continue their breast awareness campaign themed “To Feel It, Find It, Fight It” this month.

“As St. Maarten recovers, people shy away from thinking about difficult things. We want to remind them that timely action can halt things from being truly difficult. It is our responsibility to be positive in the fight to save our nation’s women by reminding them to be breast aware and providing them with the opportunities to get checked,” Alphonso said.

Breast cancer awareness activities will include educational, awareness, fundraising and physical activities as well as opportunities for women to get free clinical breast examinations. Activities that are still to be held include a Paint It Pink do-it-yourself workshop, Breast Aware and Car Care Workshop, a moonlight meditation, a celebrity waiter dinner, a gala movie night, Pink Phit and Phabulousa run/walk challenge, bikers for boobs rally, Pandora’s Pink Party, public service announcements on the radio, public and private group information sessions, the distribution of educational literature such as shower guides and women’s breast health handbook, and 30 opportunities where women can get a free clinical breast examination offered by resident health care providers.

Alphonso and Elektra said they are “enormously grateful” to the business community, supporters and volunteers for their continued support. “Despite the aftermath of the storms and severe setbacks, they have embraced the October 2018 ‘be breast aware’ campaign,” the foundation presidents said.

Positive Foundation launched the breast cancer awareness movement in 1998 and has collaborated with Elektralyets Foundation for more than a decade in the fight to save lives with early detection messaging.