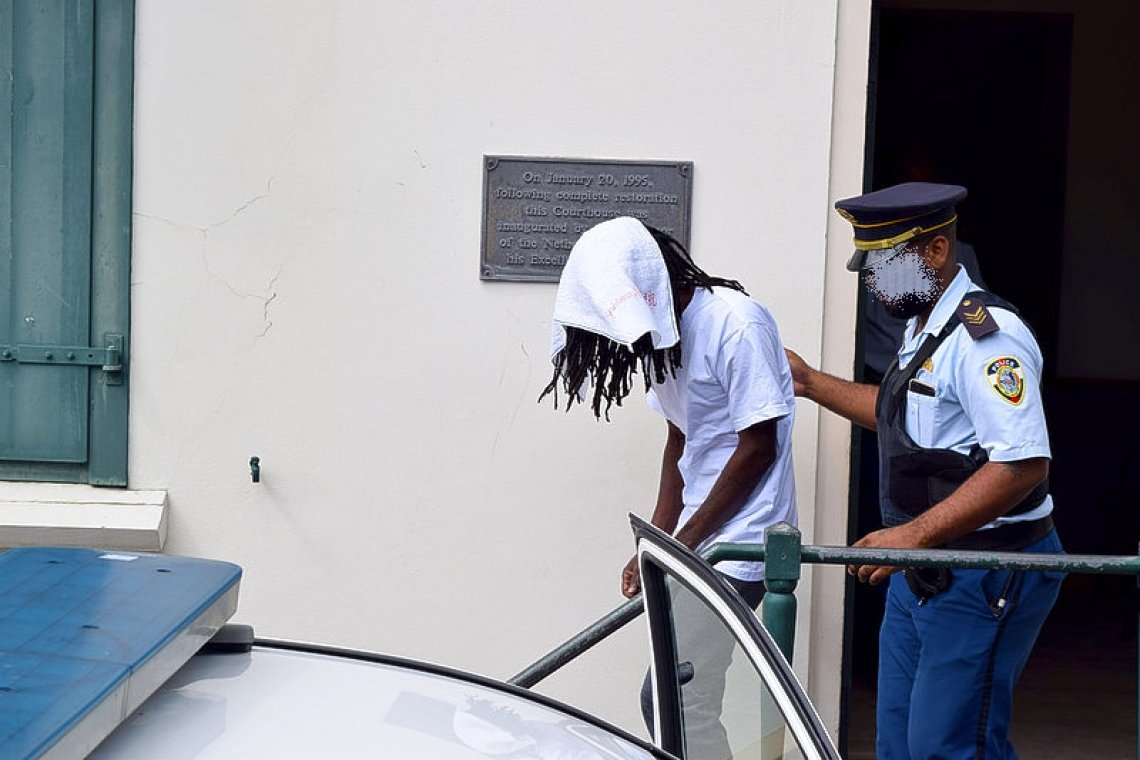 Akeba Zambo Williams being led out of the Courthouse on Wednesday, January 22, when he stood trial for his involvement in murder, attempted murder and two armed robberies. (File photo)

PHILIPSBURG–The judge sentenced defendant Akeba Zambo Williams (35) to twenty years in prison for a host of crimes, including the August 5, 2018, murder of Jonathan Williams, an April 22, 2017, shooting in Maho, the July 7, 2017, armed robbery of Princess Port de Plaisance Casino, and the June 2015 armed robbery of a jewellery store, during Wednesday’s sitting of the Court of First Instance.

Williams was sentenced according to the prosecutor’s demand. The Court held Williams, who was born in St. Kitts, for an accomplice in the cold-blooded execution-style murder of Jonathan Williams, who was ambushed and shot in his car while backing out of a parking space in front of RBC Bank in Simpson Bay around 4:30am, August 5, 2018, after a night of partying at popular club Soggy Dollar.

Following the prosecutor, the judge found it proven that Williams was an accomplice to murder, as he had been driving the getaway car that fled the scene of the crime.

During the hearing, the prosecutor played a 30-minute compilation of closed-circuit television (CCTV) footage shot by cameras in the vicinity of the shooting.

According to attorney-at-law Sjamira Roseburg, the compilation was based on guesswork, opinions and presumptions and, therefore, should be excluded from the evidence. However, the judge stated in his ruling that the video was a “reliable representation of the events surrounding the shooting incident.”

The judge found it proven that Williams had waited for the victim in his car, which was parked closed to the victim’s vehicle. Just at the time when the victim wanted to drive away, the defendant blocked him with his car, so that a companion could fire a few shots at the victim from close range. The shots hit the victim in the head, causing him to die almost immediately.

“The suspect then fled from the scene of the incident together with the shooter. This chronology indicates a targeted action,” the judge said in holding Williams for an accomplice to murder.

He was held by the police in a yard adjacent to a brothel on Soualiga Road in September 2018. He was there together with several other persons. Police found a quantity of marijuana on a table and a firearm with ammunition which was hidden in a sound box.

The judge said it could well be that the defendant had these items at his disposal, but he was acquitted of drug and illegal firearm possession for lack of convincing evidence.

The Court did find it proven that Williams had attempted to kill two “Spanish” men in the vicinity of adult entertainment club Platinum Room in Maho on April 22, 2017.

The prosecutor considered attempted murder proven, as the defendant had followed the men and had stepped out of the car with a gun in his hand. Williams said it was not him on the video and that police could not have recognised him because he had not been arrested before.

The Court said it remained unclear whether the suspect had acted in accordance with a previously-made plan or that he had acted in a sudden surge of emotion. “The brief conversation that preceded the shooting incident may indicate this. The conclusion is that murder cannot be proven, but an attempted homicide can,” the judge said.

Williams had confessed his involvement in the June 2015 robbery of Milano Diamond Gallery jewellery store at Cyrus Wathey Square in which US $227,504 worth of jewellery was stolen by four men. During this robbery, two men entered the store brandishing firearms, tied up the store’s employees and forced one of them to open the store’s safe. Jewellery was then deposited in two backpacks and the robbers left the store. Two other men were waiting outside for them on motorbikes.

Williams’ DNA was found at the scene. He admitted that he had committed this robbery, saying that he had just arrived in St. Maarten at the time and had been short on money. He said he had been influenced by others and was sorry for his role in the crime. However, he said he had never been paid for his part in the armed robbery.

Williams also faced charges of armed robbery and car theft in commission of the July 7, 2017, robbery of Princess Port de Plaisance Casino. Four masked men stormed into the establishment around 2:00am that night, robbing it at gunpoint. One man was shot trying to foil the robbery. The robbers made off with approximately $3,000, fleeing the scene in a white Suzuki Grand Vitara that had been reported stolen a few days prior to the robbery and was found abandoned later that day.

The prosecutor and the judge both considered it proven that Williams was involved in the armed robbery and the car theft, as his DNA was found on the door handles.

Due to the fact that the defendant spent four months of his pre-trial detention at the police station in Philipsburg without a day programme and recreation and where he had to stay in a cell for at least 23 hours a day, the judge granted the defendant a six-month reduction of his sentence.