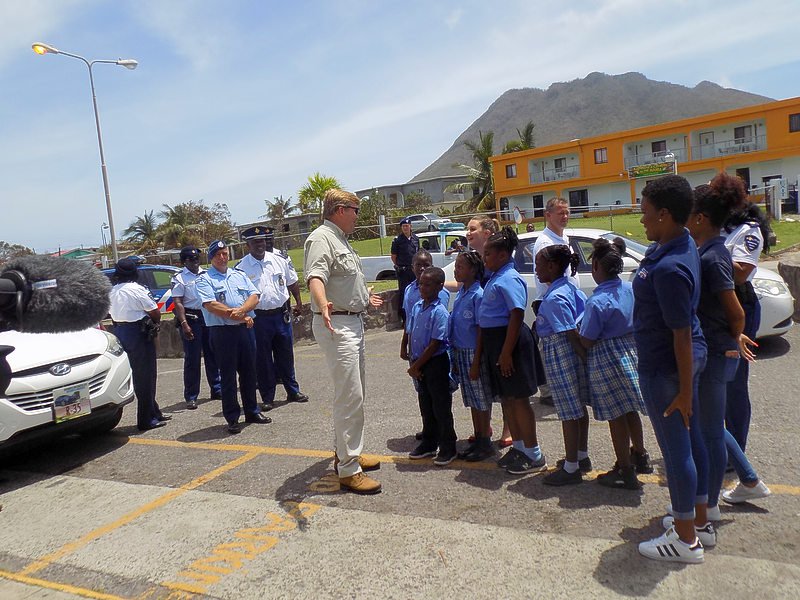 ST. EUSTATIUS–King Willem Alexander and a delegation visited St. Eustatius on Tuesday to witness the devastation left behind by Hurricane Irma. The King arrived on board a military helicopter after first visiting Saba. He was flown around the island for an aerial view of the island then touched down at F.D. Roosevelt airport.

He was met at the airport by Acting Governor Julian Woodley, Island Council members Clyde van Putten (PLP), Koos Sneek (DP), Adelka Spanner (DP) and Protocol officer Mercedes Lopes-Spanner, as well as many citizens and visitors on the island.

King Alexander accompanied by Kingdom Relations Minister Ronald Plasterk and officials met various groups including the Acting Governor Woodley, Island Council members Sneek, Spanner, van Putten, Merkman and Commissioners Charles Woodley and Derrick Simmons Jr. They discussed damages the island has sustained and the essentials that the island will need in the near future.

The damage to homes and especially the persons who lost their roofs was also discussed. In total 107 roofs were damaged during the hurricane.

King Alexander then spoke with CEO of STUCO (St. Eustatius Utility Company) Fred Cuvalay, and his former assistant Neuman Pompier of STUCO. Pompier came out of retirement to offer help after the passing of Hurricane Irma.

Then he spoke with the members of the St. Eustatius Disaster Committee, Edris Bennett -Merkman and Dr. Sharda Babue. The delegation received a report of the activities that took place during and after the passing of Hurricane Irma.

The EUTEL NV Team then met the visiting delegation. They explained that most internet and phone lines were reconnected after the storm.

The King said he knows that there were houses and roofs that were damaged and promised that the people of the island would not be forgotten.