Home Local News   King and US President are welcome for ‘First Salute’ | THE... 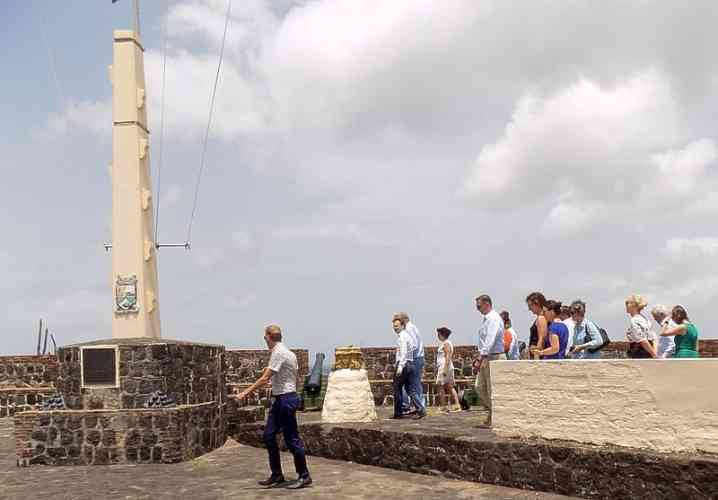 Monuments Director of St. Eustatius and local historian Walter Hellebrand pointing to the plaque on the base of the flagpole in Fort Oranje where the “First Salute” took place.

ST. EUSTATIUS–During their last visit to St. Eustatius in July, the members of the Dutch Parliament’s Second Chamber Committee for Kingdom Relations were informed by island’s Monuments Director and historian Walter Hellebrand that the 250th anniversary of the “First Salute” is only eight years away. “It is really nice to see that my prompt was so actively taken up and that there is now a proposal to turn the anniversary into a big, high-level event, “Hellebrand told The Daily Herald.

While giving a short overview of the history of Statia to the parliamentary delegation inside Fort Oranje, he commended the Central Government Real Estate Agency (Rijksvastgoedbedrijf) for investing in the restoration of the Fort but added that restoration only makes sense if funds are also devoted to the consolidation of the cliff that the fort stands on.

He added that in 2026 – if properly restored and secured – the fort could be the venue for a celebration of the 250th anniversary of the first acknowledgement of the sovereignty of the United States of America.

This took place through a salute to the flag of the infant nation by the canons of Statia’s Fort Oranje on November 16, 1776. This was acknowledged in 1939 by President of the United States Franklin Delano Roosevelt, who presented a plaque to the island as a formal recognition.

“After my talk, I discussed a celebration with them and the idea of having the heads of state of both the Netherlands and the United States here. A celebration of the First Salute is a great – and unique – international platform for Statia to use. Once the platform is secured, it can be used to tell a host of stories that together can unfold the whole history of our special island,” Hellebrand said.

Member of Parliament for Socialist Party (SP) Ronald van Raak, who was part of the visiting Second Chamber delegation, proposed to State Secretary of Home Affairs and Kingdom Relations Raymond Knops that the 250th anniversary could be celebrated on Statia with the King of the Netherlands and the President of the United States in attendance.

Knops responded that he would find out what the inhabitants of Statia think about the plan. The voting on Van Raak’s proposal will be held on Tuesday.