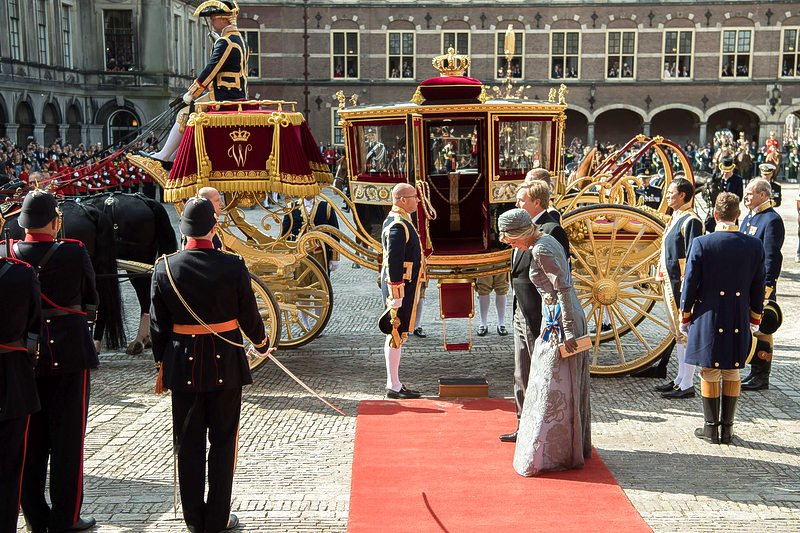 THE HAGUE–King Willem-Alexander opened his traditional Throne Speech on Budget Day on Tuesday with comforting words for devastated St. Maarten.

“On Budget Day, all eyes are traditionally focused on The Hague. But today, our heart and thoughts are primarily with the people of St. Maarten, St. Eustatius and Saba who have been hit so hard by the destructive force of Hurricane Irma. We immensely sympathise,” said the King, who visited the Windward Islands last week Monday and Tuesday.

In his speech during the formal gathering of the Dutch Parliament, the Dutch Government, representatives of the Dutch Caribbean islands and invited guests in the Hall of Knights (Ridderzaal) on the Binnenhof, the King spoke of the Kingdom ties.

“The mutual relations in the Kingdom become visible under these difficult circumstances. Assistance is offered from many sides and help is given. The [Dutch, –ED.] Government will do everything in its power to alleviate the acute needs. The Caribbean part of the Kingdom is not left on its own in the reconstruction,” the King said in the statement prepared by the Dutch Government.

In the later part of the Throne Speech, the King addressed safety and stability in the Caribbean part of the Kingdom, which he said also formed the basis for growth and welfare. “That is why there will be additional money for the Coast Guard and the efforts to combat border transgressing and undermining crime will continue for four years.”

Present at the formal gathering were the Ministers Plenipotentiary, Juan David Yrausquin of Aruba, Anthony Begina of Curaçao and Henrietta Doran-York of St. Maarten, as well as Governor Lucille George-Wout of Curaçao and Alfonso Boekhoudt of Aruba. St. Maarten Governor Eugene Holiday was unable to attend due to the critical situation on the island.

The 2018 budgets of the Dutch ministries were presented on Tuesday. In the budget of Kingdom Relations it was stated that the cooperation between the countries Aruba, Curaçao, St. Maarten and the Netherlands guaranteed legal security, good governance and the protection of fundamental rights and freedom of all inhabitants of the Kingdom. After Hurricane Irma, the Netherlands has pledged support to St. Maarten, St. Eustatius and Saba.

It was announced that the Team Combating Undermining TBO, which is charged with the tackling of border transgressing and undermining crime, will continue to work for four years as of 2018. An amount of 12 million euros is available for this team on an annual basis. In light of the international safety situation, the Coast Guard will get 8 million euros this year and next year for a reinforced input and maintenance.

A well-functioning government is also important for governmental, democratic and social-economic development of Bonaire, St. Eustatius and Saba, it was stated in the 2018 Kingdom Relations budget. “That is why investments are made in young talent, such as traineeships for young civil servants.”