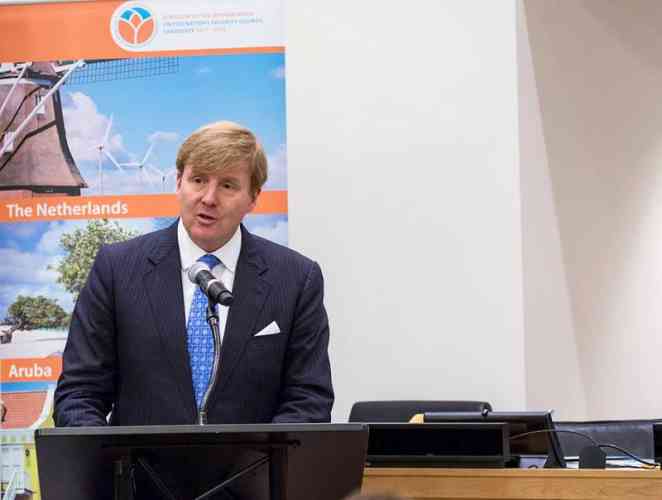 THE HAGUE– King Willem-Alexander of the Netherlands, his wife Queen Máxima and the four prime ministers of the Kingdom will take part in the 74th General Assembly of the United Nations which will take place in New York City September 24-27.

Apart from the King and Queen, the Kingdom delegation will consist of Prime Ministers Mark Rutte of the Netherlands, Evelyn Wever-Croes of Aruba, Eugene Rhuggenaath of Curaçao and Leona Romeo-Marlin of St. Maarten.

In his speech, King Willem-Alexander will point out the importance of multilateral cooperation between the UN member states in the interest of peace, justice and development. He will also address the importance of joint action in the area of climate change.

Queen Máxima also will be present at the UN General Assembly in her capacity as UN Secretary-General Special Advocate (UNSGSA) for inclusive financing for development, a function she now has held for 10 years. To celebrate this anniversary, the UN will hold a special event on September 25 titled “Financial Inclusion for Development: Building on 10 Years of Progress.” UN Secretary-General António Guterres will be one of the speakers.

The programme of the members of the Kingdom delegation includes many events, consultations and bilateral talks.

The Prime Ministers of Aruba, Curaçao and St. Maarten will engage in talks with their colleagues about the specific challenges of small island developing states (SIDS), such as their vulnerability to external influences and natural disasters. The Dutch Caribbean countries will put the trans-national SIDS issues on the global agenda during the UN General Assembly and will identify new forms of cooperation.

Prime Minister Romeo-Marlin will speak at a gathering of the Clinton Global Initiative Action Network about the strengthening of economies, stimulating investments and increasing resilience against the consequences of climate change in the Caribbean.

Prime Minister Wever-Croes will organise a gathering on the implementation of sustainable development goals (SDGs) 16+ in the SIDS. The objective is to achieve cooperation with other SIDS and UN organisations in the area of combating of corruption and the strengthening of transparent institutions. She will also talk about her intervention of the so-called Progress, Gaps and Challenges during the High-Level Review of the Samoa Pathway.

Prime Minister Rhuggenaath, together with his colleagues of Aruba and St. Maarten, will address the need for the further development of the SIDS during the High-Level Review of the SAMOA Pathway.

Prime Minister Rutte is in New York on September 23 and 24. He will speak at the Climate Summit on the eve of the opening of the General Assembly. He will receive the Atlantic Council de Global Citizen Award for his contribution to strengthening the Trans-Atlantic relations. Other recipients of this award will be Chile President Sebastián Piñera, TV producer Brian Gazer and music artist will.i.am.

Rutte, together with Minister Van Nieuwenhuizen, will launch the Action Year of the Global Commission on Adaptation to speed up worldwide climate adaptation in anticipation of the Climate Summit in Chile at the end of this year and the international Climate Adaptation Summit which takes place in the Netherlands on October 22, 2020. Rutte will further meet with UN Secretary-General Guterres and have bilateral talks with several leaders of government.