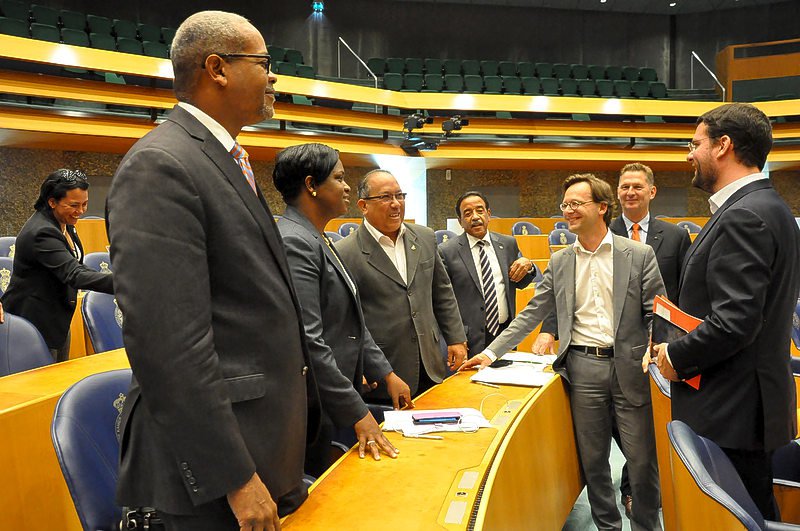 THE HAGUE–It was quite an exceptional setting in the Second Chamber of the Dutch Parliament on Tuesday, with seven special delegates from the Dutch Caribbean Parliaments seated in the benches: Rene Herdé, Desiree de Sousa-Croes, Ady Thijsen and Andin Bikker of Aruba, Glenn Sulvaran of Curaçao and Cornelius de Weever and Leona Marlin-Romeo of St. Maarten.

On the table was the initiative Kingdom Law proposal of Member of the Second Chamber Roelof van Laar of the Labour Party PvdA to restrict the use of General Measures of the Kingdom Government (“Algemene Maatregel van Rijksbestuur” AMvRB) without a legal basis by adapting two articles of the Kingdom Charter. All indications are that the law proposal will receive a majority support in the Second Chamber

The handling of the initiative Kingdom Law proposal, of which the original concept was submitted in 2000 by then Member of the Second Chamber Gert-Jan van Oven (PvdA), started in the Second Chamber on Tuesday with the first term in the presence of Dutch Minister of Home Affairs and Kingdom Relations Ronald Plasterk. Also seated in the government’s section in Parliament was the petitioner of the law, Van Laar.

Members of Parliament (MPs) Herdé, Sulvaran and De Weever made use of their right to speak. For De Weever it was his first time to take the lectern in the Second Chamber, as he, unlike Herdé, Bikker, Thijsen and Sulvaran, was not an MP the last time when Dutch Caribbean delegates spoke in the Second Chamber during the handling of the laws to change the constitutional relations in the Kingdom in 2009 and 2010.

The Dutch Caribbean countries have submitted an amendment to the Kingdom Law proposal. The amendment, an initiative by Member of the Aruba Parliament Bikker and co-signed by the six other delegates, seeks to secure the opportunity for members of the Dutch Caribbean Parliaments to submit a Kingdom Law proposal. Under current law this is not possible.

Member of the Second Chamber André Bosman of the liberal democratic VVD party, the first speaker, expressed support for the initiative law and complimented Van Laar for completing the process of handling of a law proposal that first came to the Parliament 15 years ago. He called the handling of an initiative Kingdom Law proposal a “unique” event.

“This law proposal aims to maximize the Parliamentary involvement in the decision-taking process by the Kingdom Government. Autonomous AMvRBs are decisions that are taken by the Kingdom Government without control by Parliament. The VVD is of the opinion that this should be kept to a minimum. That is why it is good that this initiative proposal will restrict that space,” said Bosman.

Curaçao MP Glenn Sulvaran considered the law proposal a “step in the right direction” to reduce the so-called democratic deficit, the lack of representation of the Dutch Caribbean countries in the Kingdom Government and the lack of a Kingdom Parliament. “Together with the dispute regulation, this initiative signals a positive effort to move forward in the Kingdom,” said Sulvaran.

Aruba MP Herdé said the law proposal took the “autocratic and undemocratic” aspects out of the Charter. He said that although the law proposal would terminate the legality deficit, the lack of control by Parliament, of AMvRBs, it would not end the democratic deficit that the islands feel.

Herdé brought up the issue of equality of all people in the Kingdom, a term that Bosman immediately questioned because, as he said, the Netherlands had 17 million inhabitants and the Dutch Caribbean countries combined some 250,000. “It is not about numbers, but about things that in which we share a responsibility, based on equivalence. When we stand in front of a judge let’s say about a rental contract, the judge will not look at who is richer, bigger or stronger,” said Herdé.

De Weever said that naturally the St. Maarten Parliament supported the law proposal in an effort to reduce the democratic deficit in the Kingdom. He said that St. Maarten had comprehension for the four-year term of an AMvRB under the new law, but that it was concerned about the possibility of extension which seemed without boundaries. “It is understandable that more time is needed to prepare the legislation due to the complexity of the material, but on the other hand the Kingdom Government should also act promptly to bring an end to such a situation.”

Aruba MP Thijsen also questioned the extension of the term of an AMvRB to four years, with the possibility of prolonging the AMvRB by two years, whereas the term in the original initiative law proposal of Van Oven was two years. He underscored that the involvement of the legislative body, Parliament, was very important in the process of issuing AMvRBs. “We all want the democratic deficit to be reduced.”

MP Ronald van Raak of the Socialist Party (SP) expressed his support for the law proposal. He said that based on the Charter the countries in the Kingdom “unfortunately” were not equal and that it would be the Second Chamber that would be voting on this law proposal.

Van Raak mentioned the commonwealth structure which he and Bosman had proposed sometime ago. “As a socialist I am for complete equivalence and for total independent countries,” he said, adding that the latter was naturally up to the people of the countries to decide on.

Aruba MP Bikker elucidated on the amendment. He said it concerned a “small technical adjustment” that would provide the opportunity for Parliamentarians of the islands to bring a Kingdom Law proposal to the floor of the Second Chamber. Now the islands can only do so via their Minister Plenipotentiary. In other words, the Dutch Caribbean Parliaments would obtain the right to initiative. He called this a “professional gesture” of the Dutch colleagues.

Dutch MP Machiel de Graaf of the Party for Freedom PVV said his party would surely vote against the Kingdom Law proposal. “We don’t want a marginal adaptation to the Charter. We want to get rid of the entire Charter. The PVV has always said that it wants to bid farewell to the islands.”

The second term of the Kingdom Law proposal of Van Laar has been scheduled for Thursday, while the voting on the law proposal as well as the amendment of Bikker will most probably take place next Tuesday. The special delegates only have speaking rights, and cannot vote in the Second Chamber.

Today, Wednesday, the Second Chamber will handle the law proposal to adapt the Kingdom Law Dutch Citizenship. MP Marlin-Romeo will speak on behalf of St. Maarten. For her it will also be the first time she speaks in the plenary hall of the Second Chamber.

In a reaction, De Weever said that he was “humbled and honoured” that he was able to speak in the Second Chamber on Tuesday. “It is important that we challenge ourselves to step out of our comfort zone(s). Also, we need to inspire and encourage our children, students, graduates and future politicians in St. Maarten, the Netherlands, and the United States and in the region that they can also accomplish anything when they work and apply themselves. Furthermore, we have a responsibility to ensure that we as St. Maarten are at the table, and we should be treated equally and fairly.”