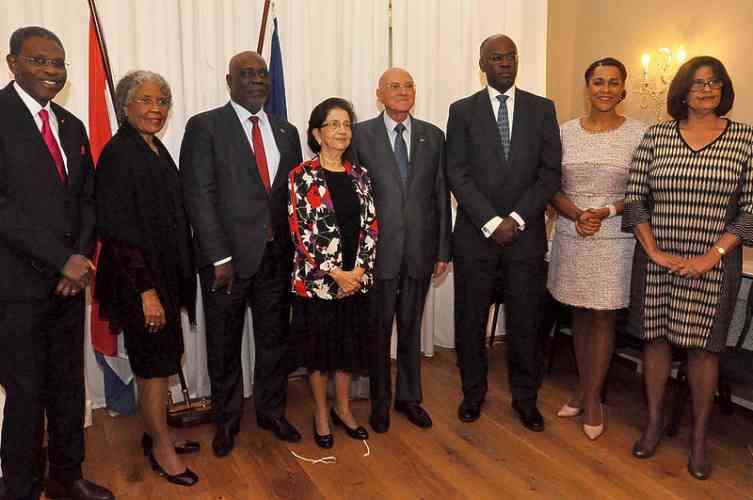 THE HAGUE–The partners in the Dutch Kingdom need to work more on strengthening their ties and projecting their joint values to the world while working on the wellbeing of the people. Minister of State and former Governor of the Netherlands Antilles, Professor Jaime Saleh was clear in his message during his lecture on Wednesday. “Too little has been invested in our unity.”

Saleh, who was invited by Curaçao Minister Plenipotentiary Anthony Begina, has said it many times before: needed are more cooperation, a better understanding of each other’s cultures, less talk about constitutional structures and putting the interests of the citizens in the Kingdom up front.

According to constitutional law expert and former President of the Joint Court of Justice Saleh, a joint vision aimed at a new dynamic to foster ties within the Kingdom, to give concrete content to the relations whereby the added value is clearly identified, is not only beneficial to the relations within the Kingdom but also guarantees a better future for its citizens.

The Kingdom has to showcase its added value abroad. “The scale of our islands is less relevant in this. More important is strong leadership with people with knowledge, capacity and integrity, as well as a serious vision which is direly needed to support the ambitions and expectations of the entire society,” said Saleh, who pointed out that this should not be left to the governments alone, but there was a responsibility for the people themselves to “get moving.”

The wishes of “the man in the street,” as Saleh put it, have to be respected and carried out. He reminded the large, attentive audience at the Curaçao House, which included Governors Eugene Holiday of St. Maarten and Lucille George-Wout of Curaçao, that a vast majority of people in the Dutch Caribbean had voted to maintain the relations in the Kingdom.

Continued discussions on constitutional relations need to be limited. The manner in which content is given to these constitutional statuses is more important. “I am repeating what I have often said, namely that people don’t live in constitutional structures. People live in a house, in a district, and they need food on the table.”
Saleh noted that citizens need a decent standard of living, employment, security, proper housing, health care and education. This should be the main focus in all parts of the Kingdom, said Saleh, who added that good governance, solid finances and law enforcement functioned as important, normative pillars in the relations.

Naturally a formal democratic constitutional state is of great importance, but it is not the only aspect of being a successful and solid country. He said there were enough examples in the Caribbean and Latin-American region of independent countries with “beautiful constitutions with all sorts of rights and freedoms” while the people in practice were living in ‘a mess,’” in poverty and insecurity. “When we look at these countries, we should be glad that we are part of the Kingdom.”

Cooperation starts with trust, said Saleh. “The existing relational problems are solvable. But there is much work to be done to solve the main issue: the lack of trust. We have to work on creating more trust in all openness. Only if the partners in the Kingdom can agree, can we go beyond the constitutional discussions and invest more in common trust.”

Social organisations play an essential role in fostering more unity and trust. Saleh mentioned cultural exchanges within the Kingdom and cooperation agreements between social organisations as concrete means to give content to better relations and to highlight the added value of the Kingdom. “Enough talk. There is work to be done,” concluded Saleh.