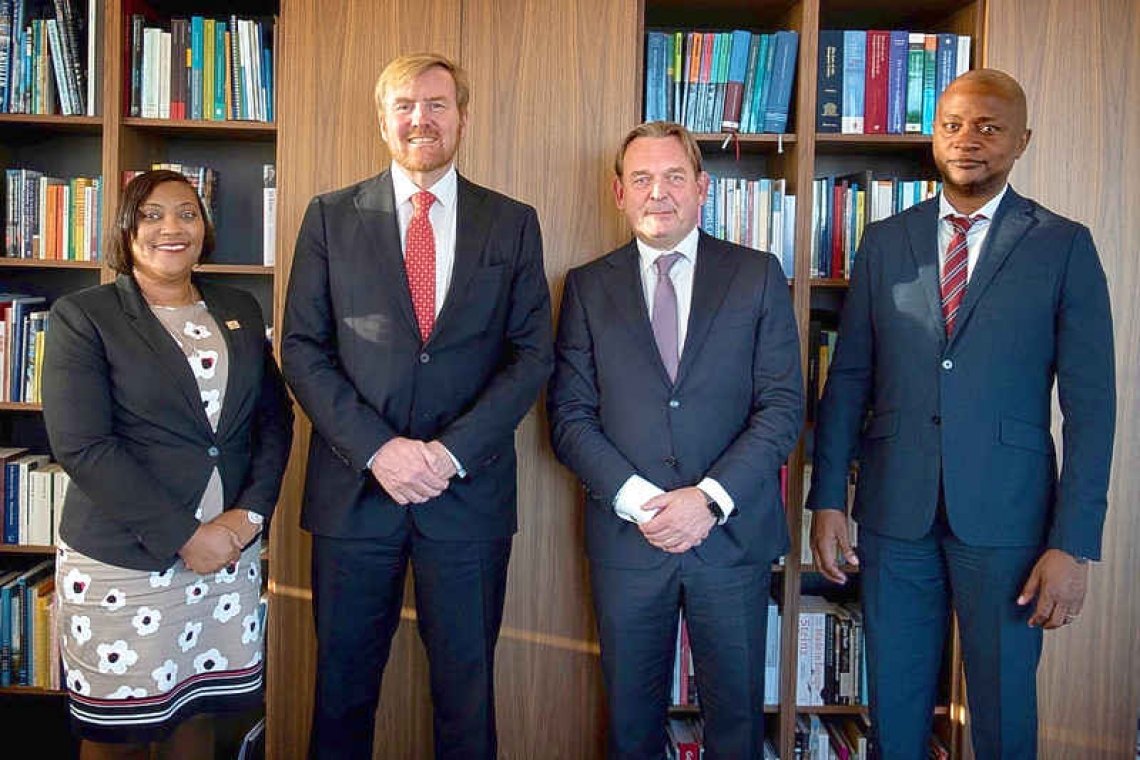 King Willem-Alexander (second from left) met with the three Ombudsmen in the Kingdom in October last year. At left is Gwendolien Mossel of St. Maarten, at right Keursly Concincion of Curaçao, and second from right Reinier van Zutphen of the Netherlands/Caribbean Netherlands. (Kick Smeets file photo)THE HAGUE–The Ombudsmen of Curaçao, St. Maarten and the Netherlands sent a letter to Dutch Prime Minister Mark Rutte earlier this month in which they sought attention for the crisis that has evolved on the islands and the adverse consequences of the Dutch conditions tied to liquidity support.

Ombudsmen Keursly Concincion (Curaçao), Gwendolien Mossel (St. Maarten) and Reinier van Zutphen (the Netherlands and Caribbean Netherlands) pointed out that problems do not stop at the border and that poverty was on the rise in the Dutch Caribbean, an issue that the COVID-19 crisis has made much worse. Aruba does not have its own Ombudsman as yet.

“For many island residents, the coronavirus crisis has only made their situation more urgent. The conditions for liquidity support imposed by the Netherlands, in particular the mandatory reduction of personnel cost, will inevitably bring more suffering, notably for the most vulnerable people in society,” it was stated in the July 8 letter, which was released on Tuesday.

Creating more poverty cannot possibly have been the intent of the Kingdom government, the Ombudsmen stated. “The effects of this measure worsen the social and economic inequality within the Kingdom and do not benefit democracy in the countries in the Caribbean part of the Kingdom.”

The Ombudsmen also highlighted their concern about the lack of an effective approach to the recovery in St. Maarten following the damage caused by Hurricane Irma in September 2017. They referred to the letters from the St. Maarten Ombudsman and the Dutch National Ombudsman in which they expressed their great concerns about the lack of progress.

For Curaçao, the existing and increasing poverty on the island and the lack of access to clean drinking water for vulnerable citizens are also important issues.  An additional problem in all Dutch Caribbean countries is posed by the refugees from Venezuela. The Ombudsmen noted that they have previously mentioned the lack of adequate regulations and facilities for receiving this group of people and that the authorities should be aware of all these issues, as they have written about these issues on earlier occasions.

The lack of an Ombudsman in Aruba in itself poses a problem, because citizens of that country are unable to submit their complaints regarding government action to an independent and impartial institution. “This creates inequality within the Kingdom,” Concincion, Mossel and Van Zutphen stated in their letter to Rutte. They asked for a meeting with Rutte to discuss the issues and “to find a solution together in the Kingdom.”