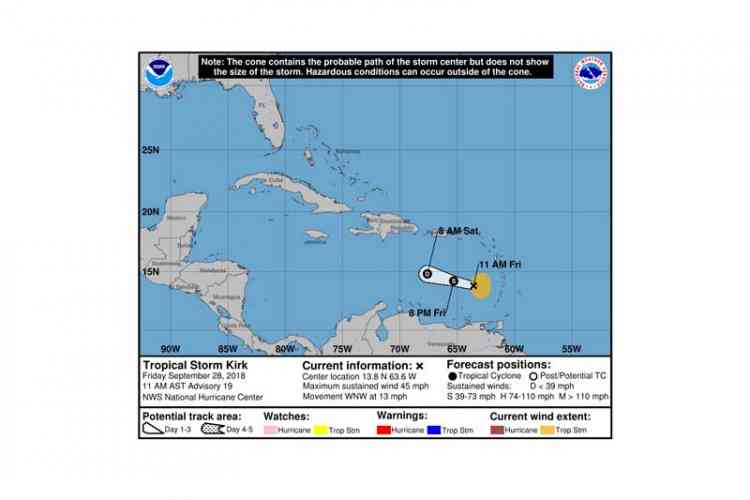 …A SMALL CRAFT WARNING REMAINS IN EFFECT FOR ST. MAARTEN…

AT 11:00AM…the center of Tropical Storm Kirk was located near latitude 13.8 North, longitude 63.6 West or about 300 miles south of St. Maarten. Kirk is moving toward the west-northwest near 13 mph (20 km/h)…and this motion is expected to continue through

Sunday. On the forecast track, the center of Kirk or its remnants will move across the eastern and central Caribbean Sea over the next day or two.

Reports from an Air Force Reserve Hurricane Hunter aircraft indicate that maximum sustained winds have decreased to near 45 mph (75 km/h) with higher gusts. Kirk is forecast to weaken to a tropical depression tonight, and then degenerate into a trough of low pressure on Saturday. Kirk is currently making its closest approach to St. Maarten, passing about 300 miles south of the island. Tropical-storm-force winds extend outward up to 105 miles (165 km) mainly to the east of the center.

Rainfall: As Kirk passes well south of St. Maarten, it has the potential of producing up to 1 inch of rain today. The chance for showers and isolated thunderstorms has diminished, however flooding remains possible in areas prone to flooding as some of these showers may be heavy.

Seas: Rough sea conditions with waves peaking near 11ft are expected to remain throughout the day and will gradually subside through the weekend into early next week as Kirk moves farther away from the area.

December 2, 2020
0
The Auxiliary Care Facility (AFC) as it was being set up~ 3 new infections recorded ~PHILIPSBURG--Three persons had tested positive for COVID-19 effective Tuesday,...

December 2, 2020
0
The Auxiliary Care Facility (AFC) as it was being set up~ 3 new infections recorded ~PHILIPSBURG--Three persons had tested positive for COVID-19 effective Tuesday,...