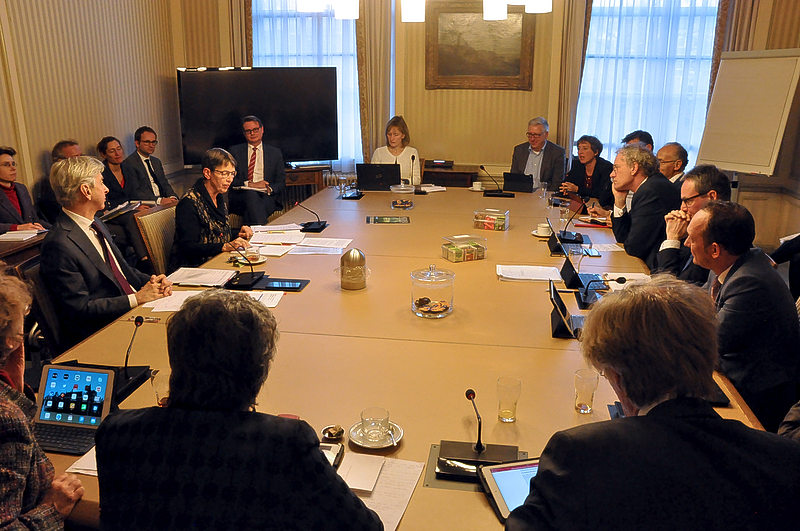 THE HAGUE–Dutch State Secretary of Social Affairs and Labour Jetta Klijnsma has partly given in to the wish of the First Chamber of the Dutch Parliament to look at setting a social minimum for Bonaire, St. Eustatius and Saba that is based on the benchmarks of the basic cost of living.

Klijnsma promised in a meeting with the First Chamber’s Permanent Committee for Kingdom Relations on Tuesday that she would draft an action plan to establish a social minimum for the Caribbean Netherlands that is based on the objective benchmarks of the basic cost of living. The action would be ready before March 2017. In the meantime, she would keep striving for a higher minimum wage and the implementation of the poverty policy.

Klijnsma as well as Dutch Minister of Home Affairs and Kingdom Relations Ronald Plasterk were called to a meeting with the Senate to discuss the execution of the motion of Senator Ruard Ganzevoort of the green left party GroenLinks.

This motion, which was co-signed by ten other parties in the Senate and adopted almost unanimously in June this year, requested the Dutch Government to establish a social minimum that is based on the benchmarks of the basic cost of living for the Caribbean Netherlands.

The fact that this is done in the Netherlands, but that the Dutch Government so far has not done so for Bonaire, St. Eustatius and Saba has been a source of concern in the Senate where all parties, with the exception of the Party for Freedom PVV, have been clamouring for commitment of the Dutch Government to achieve an acceptable provisions level and to raise the standard of living.

Ganzevoort questioned the reluctance of the Dutch Government to establish a social minimum and said that the Senate needed a clear answer about the calculation of the social minimum, which would also assist in establishing an adequate poverty policy.

According to Ganzevoort, Government’s policy to combat poverty made little sense if it hadn’t been established what the basic needs of the people on the islands are. “We need to define the social minimum first before we can talk about social security and poverty policy.”

Senator Helmi Huijbregts-Schiedon of the liberal democratic VVD party agreed. She said it was important to establish a point of departure, meaning a social minimum, which was linked to the basic cost of living. “That relates to the success of the poverty policy.”

Senator Meta Meijer of the Socialist Party (SP) said it was vital that the people on the islands were able to sustain themselves. She pointed out that it was simply impossible to lead a decent life, and to pay rent, cover the utilities and food bills off the social welfare.

Meijer said that in a consumers study the figures of the basic cost of living had already been accurately defined and urged the State Secretary to take the necessary steps to set a social minimum. “When will this matter finally be arranged so people can live a decent life?”

Senator Peter Ester of the ChristianUnion agreed with his colleagues that it was important to establish the social minimum, but he did question why it was so complicated, as the Dutch Government maintained, to define the objective criteria of the basic cost of living. He said that this showed that the know-how infrastructure was not up to par on the islands, and that in the Netherlands this would not have been acceptable.

Senator André Postma of the Labour Party PvdA said the order in which to do things in the context of a broader social agenda was important. He said the final figure of the basic cost of living should be the first step, based on which the social minimum should be established. He asked Klijnsma to lay the foundation.

State Secretary Klijnsma said that the subsistence minimum was not only a topic in the Senate, but also in the talks with the public entities. The first conference on establishing an integral social policy for the islands was held in Saba last month. Klijnsma said this meeting was “constructive” and that hopefully similar conferences would be held in Bonaire and St. Eustatius in January 2017.

According to Klijnsma, the social partners on the islands also have a responsibility to pay the employees a decent salary with which they can sustain themselves. St. Eustatius and Saba have a higher minimum wage, and another, considerable increase will be implemented per January 1, 2017. Bonaire, she added, could respond a bit more enthusiastically where it concerned the increase of the minimum wage. She said it was important to keep motivating the social partners to increase the minimum wage.

Besides a higher minimum wage and the subsequent increase of the social welfare, the Dutch Government was also committed to combat poverty on the islands. The child benefit (“kinderbijslag”) has been introduced and aside from the 600,000 euros that is structurally budgeted to combat poverty, the Dutch Government has made additional funds available to the tune of one million euros.

“I want to do everything possible to lend an extra hand to people who are facing hardship,” said Klijnsma. She explained that through the special allowances, it was also possible to assist people with the purchase of necessary items such as a fan, a bed or new fridge. “We can provide concrete, practical assistance.”

Plasterk acknowledged that the cost of living, the price of groceries was very high on the islands, and that ways of reducing these expenses was being looked at. In his opinion, the islands could do more in the agricultural sector by growing their own food. He commended the agricultural projects in St. Eustatius and Saba.