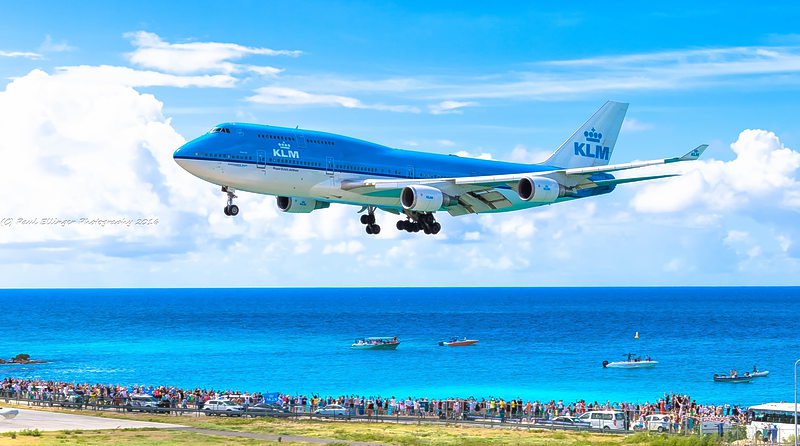 SCHIPHOL–The last flight of the Boeing 747 of the Royal Dutch Airlines KLM to St. Maarten is also a sad farewell for the pilots.

Chief Pilot of KLM’s Boeing 747 team Paul van der Ven told RTL News in the Netherlands that the pilots were disappointed that they would no longer be landing the majestic four-engine aircraft at Princess Juliana International Airport.

“It is an iconic approach, especially because of the inseparable view of the blue Caribbean sea and the aircraft landing just behind the beach. The Boeing 747 is slowly disappearing from our fleet, but the end of this landing hurts. We find it a great pity, also because of the historic ties that this aircraft has with the island,” Van der Ven told RTL.

The last KLM Boeing 747-400 touched down in St. Maarten on Friday at 11:03am, ending an era of what has been termed by aircraft enthusiasts as one of the scariest and most exhilarating landings in the world.

Since 1990, KLM has served beach goers hair-raising landings as the Boeing soared at low altitudes over Maho Beach and onto the runway. The landing was one of the main attractions mainly for tourists who crowded the beach to witness the landing and take-off.

From now on, the route Amsterdam-St. Maarten will be served by Airbus A330-200, seating. 243 passengers, as oppose to the 408 passengers that fit into the Boeing 747. The reward for passengers travelling from St. Maarten-Amsterdam will be the considerable shorter flying time as this will be a direct flight instead of making a stop-over in Curaçao. The Curaçao route will still use a Boeing 747.

Chief Pilot Van der Ven has performed the landing some 12 times in his seven years as 747 pilot. He explained that the approach was very special for pilots because they have to do a large part manually. The height of the aircraft is very important because the runway is short.

“At other airports, you make the landing as smooth as possible for the applause and your own ego. But in St. Maarten you have to put the aircraft on the ground at once,” he stated in the RTL article. The pilots are so concentrated when they land that they don’t notice a lot of the crowd on the beach. “But you know that they are there. When we take off, we do see them. We wave at them. Those are precious memories.”

The aircraft that will be used on the route Amsterdam-St. Maarten is also a nice plane, but it cannot be compared to the Boeing 747-400, said Van der Ven. Modern aircraft look more alike and they don’t have a second floor and the four engines of the 747. “She is the Queen of the Skies,” said the chief pilot who would not be carrying out the last flight to St. Maarten.