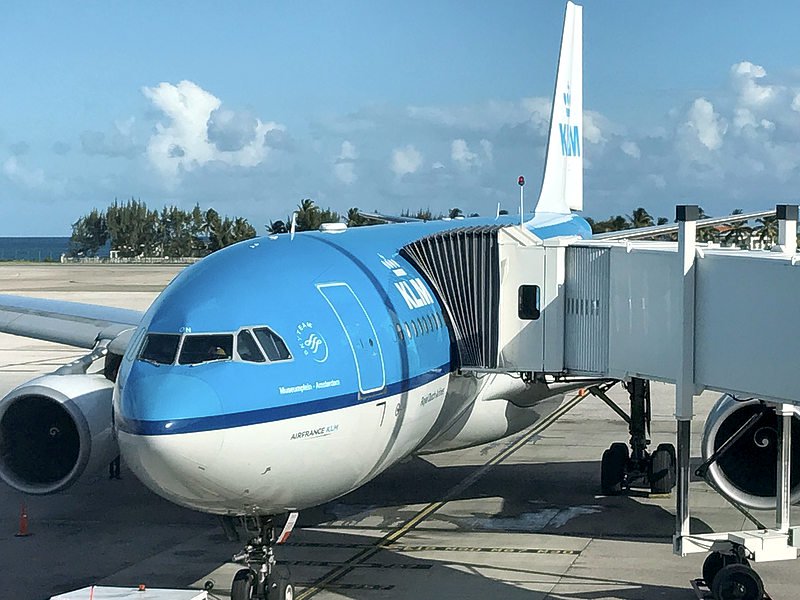 SCHIPHOL–Royal Dutch Airlines KLM will resume commercial flights from Amsterdam to St. Maarten on October 29, but in an adapted schedule via Curaçao and with only two flights per week coming winter season.

KLM announced the flight changes on Wednesday. Passengers with tickets were already informed of the changes earlier this week. Due to the exceptional circumstances in St. Maarten where Hurricane Irma has left the airport terminal and control tower damaged, KLM has decided to adapt the flight schedule for the destination.

Instead of the four direct Amsterdam-St. Maarten-Amsterdam flights that were originally planned for the winter season, KLM will fly to St. Maarten twice a week, on Friday and Sunday, with a stop-over in Curaçao on the route from Amsterdam to St. Maarten.

In Curaçao, the passengers will disembark for about an hour-and-a-half to facilitate cleaning, catering and fueling of the Airbus A330-200 aircraft, after which the flight to St. Maarten will continue. From St. Maarten, the aircraft will fly straight on to Amsterdam.

The flight KL0785 will depart Amsterdam at 9:25am and arrive in St. Maarten at 5:55pm. The so-called circle flight Amsterdam-Curaçao-St. Maarten-Amsterdam will add considerably to the travel time of passengers going to St. Maarten: 13.5 hours instead of nine.

A KLM spokesperson explained that the airline was forced to take this decision due to the exceptional circumstances in St. Maarten and the below optimal conditions at the airport. By reducing the number of flights and making a stop-over in Curaçao, KLM can keep servicing St. Maarten.

KLM has had ties with St. Maarten for many years and we will also not abandon under the current circumstances,” said KLM President-Director Pieter Elbers in a press release. The capacity to Aruba, Bonaire and Curaçao will be expanded this winter season.

An additional flight to Curaçao will added per November 15, 2017, and another two flights from mid-December 2017 to the end of February 2018. With the two circle flights on the route Amsterdam-St. Maarten, this means that KLM will be servicing Curaçao 12 times per week. The number of combined flights to Aruba and Bonaire will increase from six to seven this winter season.

In other news, KLM announced on Wednesday that a unique miniature replica MD-11 aircraft will go on auction on October 1 with the proceeds going to the Red Cross’ national collection drive “The Netherlands Helps St. Maarten.”

The aircraft with a scale of 1:25 was part of the collection of the miniature city and theme park Madurodam in The Hague. In consultation with KLM, Madurodam is making the aircraft available for the auction during a fundraising event for St. Maarten at the Hotel Okura in Amsterdam this Sunday. The fundraising event involves the largest Michelin Chef’s Table ever with 32 top chefs with a total of 39 Michelin stars cooking a fancy lunch for 320 persons.

The auctioning of the miniature aircraft emphasizes the close relations of the KLM with Madurodam, but also with St. Maarten, said KLM Netherlands Director Harm Kreulen. “Following earlier collection drives, KLM wants to underline with this auction that we are not abandoning St. Maarten,” he stated.

The MD-11 aircraft, which has been refurbished last week for the occasion, is considered a unique item. “For aircraft lovers it is a once in a lifetime opportunity to secure the possession of such an aircraft,” said Madurodam Director Joris van Dijk. This is the first time that Madurodam is auctioning a piece of its collection.

The expectations for the auction are high. Both KLM and Madurodam hope that the aircraft will be sold for a high price. The auction is expected to gather attention of both national and international collectors. Bidding will take place during the auction at the Michelin Chef’s Table at the Hotel Okura, but also online, which started Wednesday.

The initiative to organise a St. Maarten’s Chef Table came from the best chefs in the Netherlands, of whom many cooked at one of the ten editions of the Fête de la Cuisine culinary event on St. Maarten/St. Martin.