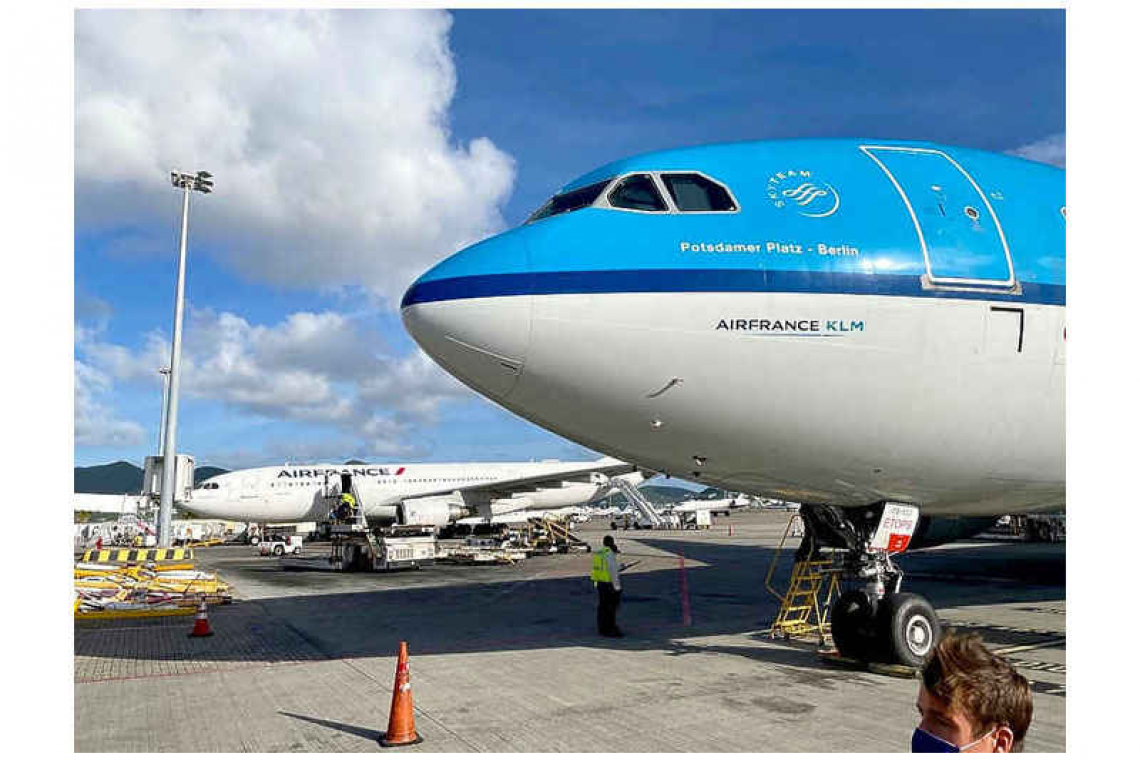 AMSTERDAM–The St. Maarten flights of the Royal Netherlands Airline KLM are in jeopardy now that the airline has announced that it will cease all long-haul flights with a new, additional COVID-19 rapid test measure put in place by the Dutch government.

Details are still sketchy and it is unsure how the KLM flights to and from the Dutch Caribbean are affected, but fact is that the airline decided immediately after Wednesday’s government announcement to stop long-haul flights per Friday. KLMs next flight to St. Maarten would have arrived this Friday and departed on Saturday. Air France is still operating long-distance flights.

The reason for KLMs decision is the announcement by the Dutch government that it will also require all international travellers arriving by airplane to provide proof of a second negative COVID-19 rapid antigen test, taken four hours before departure. It had already required a negative Polymerase Chain Reaction (PCR) test taken within 72 hours of travel.

KLM said that in response to the requirement it will halt 270 weekly long-haul flights and an undetermined number of European flights to the Netherlands from Friday. “By enforcing a rapid test from international flights, we run the risk that crew members who test positive have to remain behind at a destination. We cannot take the risk that crew members get stuck abroad, so we have decided to halt all long-haul flights,” a KLM spokesman told The Daily Herald.

The spokesperson could not confirm which destinations exactly would be affected, and whether KLM flights to St. Maarten, Aruba, Bonaire and Curaçao would be ceased from Friday. More clarity is expected in the coming days. Passengers who are still abroad have up to Friday to take a flight back. After that date, passengers will have to seek the assistance of the Ministry of Foreign Affairs in The Hague.

It is unsure what will happen with the transport of the COVID-19 vaccines to the Dutch Caribbean now that KLM has said it will cease all long-haul flights. “We also don’t want the crew of these cargo flights to be left stranded abroad,” a spokesperson told the aviation news website luchtvaartnieuws.nl.

Sources say that KLM is busy trying to arrange an exemption to the antigen testing for its pilots and cabin personnel with Dutch government authorities. The VNC labour union that represents KLMs cabin personnel said that an exemption position was instrumental for KLM crew and for the airline’s survival. “If the government is unwilling to make an exception for us, KLM indeed will be forced to keep its long-haul fleet grounded,” a VNC spokesperson told luchtvaartnieuws.nl.

The Dutch airline TUI Fly has not taken a decision yet on what it will do, but a spokesperson said that the airline would like to continue its flights to Curaçao, Aruba and Bonaire. TUI Fly has two combination flights per week to the islands.

The Dutch government further decided that the passenger flight prohibition from South-America destinations, South-Africa and the United Kingdom (UK) per Saturday, January 23 will also count for the Caribbean Netherlands. In practice this means that flights from the South-American continent to Bonaire will no longer be possible.