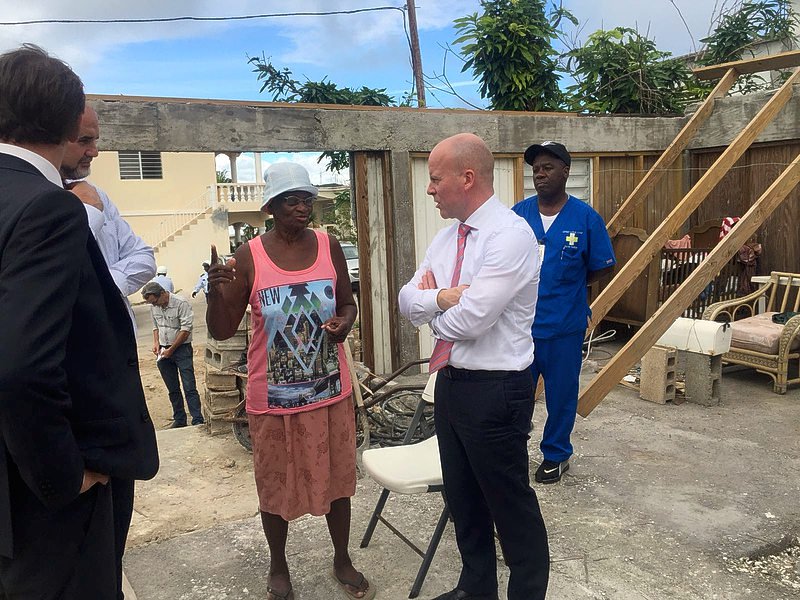 PHILIPSBURG–The message from Dutch State Secretary for Kingdom Relations Raymond Knops to local authorities on Monday was very direct. The Netherlands, he said, has delivered on the promised 550 million euros in reconstruction aid as of November 1 and it is now squarely in the court of Government to complete the circle by meeting conditions set by The Hague.

“We delivered the money on November 10, two weeks ago. We were ready and we were very, very clear about the conditions. … We didn’t change anything. We didn’t move the goalpost. … Let’s be honest, we delivered November 10 and we are still waiting due to political issues in St. Maarten that I am not involved in and there is no final political decision,” declared Knops in a press conference in Holland House.
The St. Maarten Government has signed on to increase border control support via the Royal Dutch Marechaussee and Dutch Customs officers. Still pending, though, is Government’s submission of the draft law to establish an Integrity Chamber, an institution the Dutch Government has long demanded.
Government is expected to submit this draft law to Parliament for debate in the coming days. Adoption of the law will ultimately trigger the Dutch Government’s release of some of the 550 million euros for urgent reconstruction projects. It will be up to Government to write its list of priority projects.
“Once passed by Parliament, we go immediately from the emergency phase to the reconstruction phase,” said Knops. “Even today, some politicians are still doubting whether they will accept the conditions or not. My message to these people will be: Think in the interest of the people of St. Maarten.”
Some 40 million euros will be subtracted from the reconstruction funds to cover the deficit of the 2017 country budget. Thereafter, the bulk of the funds will mostly likely be administered via the World Bank. Negotiations on this are ongoing. Knops said the funds will come to the country via loans, trust funds and direct project execution. The methods will be agreed on jointly by St. Maarten, the Netherlands and the World Bank.
While there is understanding about the fear of using the World Bank, the Netherlands sees the need “to act very rapidly,” as the next hurricane season is fast approaching.
Claims in the community as well as from politicians about the Dutch attaching “extraordinary conditions” before aid is granted are “not true,” he said. “It is normal to put conditions. … It’s Dutch taxpayers’ money. I have a Parliament. They ask me … to be accountable for spending that money. … This is about transparency, accountability.”
Knops met separately with Governor Eugene Holiday, Parliament Chairwoman Sarah Wescot-Williams, new caretaker Prime Minister Rafael Boasman and the Council of Ministers on Monday.
Describing the common thread of those meetings, Knops said he “felt a common will to work together. I think that is one of the most important things so far. … I felt a positive approach that may seem a bit funny if you followed the political debate in St. Maarten and in the Netherlands. … It looked like there was a huge tension. Of course, I can’t ignore any tensions, but we will overcome them. “
Giving his impression of St. Maarten, Knops said that while the physical damage is striking, there is also severe social damage.
“You feel in the conversation with the people that it is also the social damage. … You see desperate people who really don’t know how to start. … You see politicians who are committed to their country. At the same time, there are some political issues here which affect the speed we need to get the relief to St. Maarten as soon as possible.”
The new State Secretary is on his first official visit to St. Maarten, with planned visits to Saba and St. Eustatius. In his first full day here, he also met with French-side officials, visited Port St. Maarten, toured Simpson Bay Lagoon with the Coast Guard, had a walkabout on Front Street and Back Street and heard about trauma of Hurricane Irma from some survivors.
Knops meets with several non-governmental organisations (NGOs) today, Tuesday.