Home Local News Knops has high hopes for accord with St. Maarten 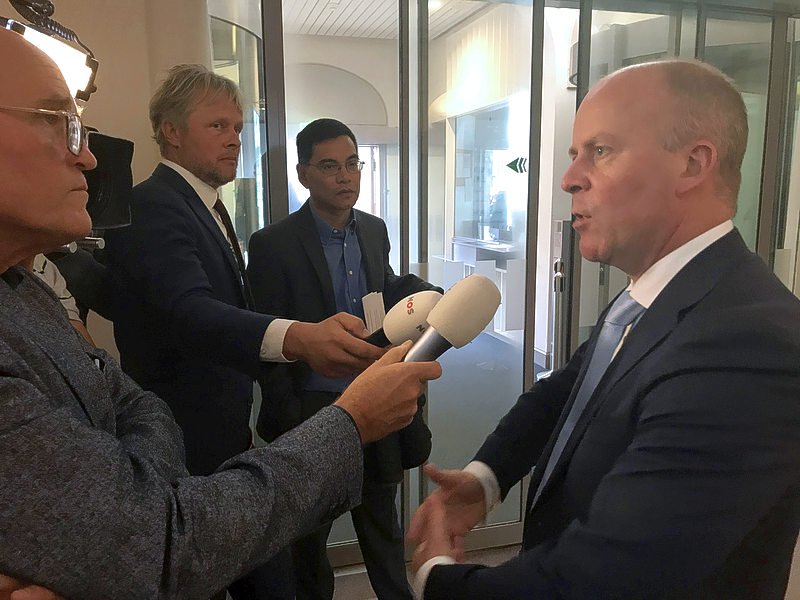 State Secretary of Kingdom Relations Raymond Knops talks the media after his first Kingdom Council of Ministers meeting on Friday, one day after he was sworn in. (Suzanne Koelega photo)

THE HAGUE–New State Secretary of Kingdom Relations Raymond Knops said on Friday that he was “highly motivated” to move forward with the financial assistance to reconstruct St. Maarten. So far, 55 million euro has been spent on assistance to St. Maarten after Hurricane Irma, of which the Dutch Government has picked up the complete tab.

While he said that the people on St. Maarten should not end up holding the short side of the stick, Knops did emphasise that the Dutch Government will not let up on the pre-conditions for the financing of the Dutch Reconstruction Fund which are the establishing of the Integrity Chamber and a reinforced border control. The deadline given to Philipsburg ends next week Tuesday.

“The conditions are absolutely clear, they are legitimate and firm. The Integrity Chamber, supervision on the spending of the funds and the border control. We have freed up the funds, but we must be absolutely sure that the funds are well-spent. If the conditions are not met, we will not spend the money on the reconstruction,” Knops told the media after the Kingdom Council of Ministers meeting.

Nonetheless, the new State Secretary of the Christian Democratic Party CDA said he was eager to get the Reconstruction Fund going. “The need is enormous. We have all seen the images of destruction. We are most willing to help and to do so in a speedy manner. But, and that was already decided by the previous cabinet, the two conditions must be met.” He said the conditions were “completely logical.”

According to Knops, the response of St. Maarten Prime Minister William Marlin “left some leeway” for the approval of the Dutch conditions. He said that as he had only been State Secretary for half a day, he had not spoken with Marlin as yet. However he did meet with St. Maarten Governor Eugene Holiday on Friday morning.

“It was a very good meeting. It is clear that we are pulling on the same side of the rope. We all want to help the St. Maarten people. That is exactly what should happen, and if we all follow this line, then we cannot disagree with each other. Let’s make this happen,” said Knops, who said that once the approval was in, the Dutch Government would move fast with the Reconstruction Fund “to do what is needed, namely to help the people as soon as possible.”

Knops said that the Governor informed him that things are slowly returning to normal. “That doesn’t take away the fact that there are still immense problems. We should now get into the phase of investments, going from emergency assistance to reconstruction. Solid investments are needed to prevent that everything is blown to pieces again if another hurricane were to pass next year. That is also why it is important not to unnecessarily wait any longer, but to start at once.”

Asked what he thought of the choice of words of Marlin when he accused the Netherlands of “holding St. Maarten hostage,” Knops said: “If it were a matter of taking hostage, I would say that this is done by the other side. But let’s stay away from these terms. Let’s just make sure that the much-needed assistance can be given, which is the biggest interest of the people and the St. Maarten Government.” He said that the Netherlands and the European Union would work together as much as possible on this dossier.

The State Secretary said that once Philipsburg had given the green light, the Dutch Government would move “immediately” to set up the Reconstruction Fund, “because there is no time to lose.” He said that the details of this fund would be worked out together with the St. Maarten Government.

Knops didn’t mention an amount, but according to media reports the Dutch Government would put in excess of 200 million euros in the fund. He did confirm that a part would be a grant. “That is necessary because the St. Maarten Government cannot carry this alone. The Hurricane caused gigantic damage and everyone feels that this cannot only be placed on St. Maarten’s shoulders. We don’t want that either. We want to share that responsibility, help St. Maarten.”

This was Knops’ first meeting of the Kingdom Council of Ministers following the installation of the Rutte III cabinet on Thursday. St. Maarten was discussed at this meeting, which was attended by St. Maarten Minister Plenipotentiary Henrietta Doran-York and her colleagues of Aruba and Curaçao, but no decision was taken.

Meanwhile, it was announced that the largest Dutch Navy ship His Majesty Karel Doorman will be docking in St. Maarten on Saturday with relief goods. The ship will bring on its last trip to St. Maarten, among other things, trucks, beds, temporary housing facilities, digital school boards, office supplies and medical equipment.

The Dutch Government announced on Friday that the Navy frigate His Majesty Van Speijk will be leaving for the Caribbean this Sunday. The ship will replace the His Majesty Zeeland which has been instrumental in transporting emergency supplies from Curaçao to St. Maarten after the hurricane. The Zeeland also provided emergency assistance in Dominica after Hurricane Maria.