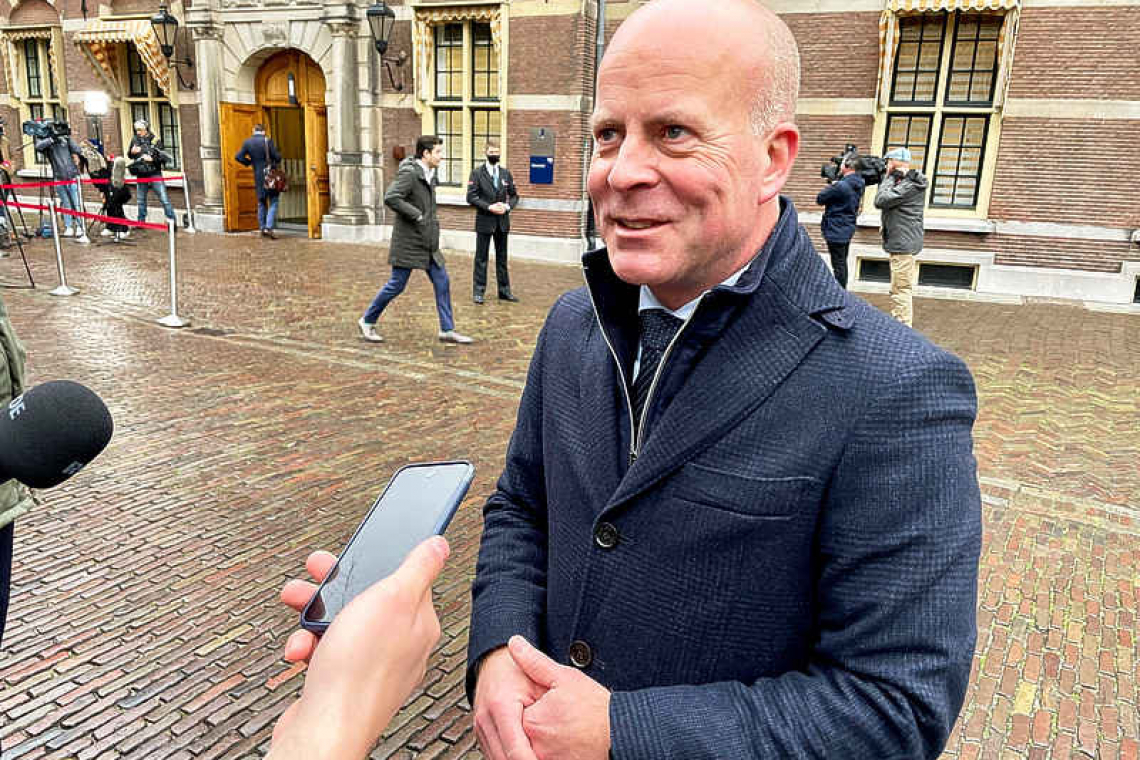 ~About there being a carte blanche for new conditions~

THE HAGUE–St. Maarten Prime Minister Silveria Jacobs erroneously stated that the Netherlands in the future will receive a carte blanche to set new conditions for liquidity support.

Dutch caretaker State Secretary of Home Affairs and Kingdom Relations Raymond Knops stated this in a letter that he sent to the Dutch Parliament on Wednesday. According to Knops, the “assertion” by Jacobs is “incorrect.”

The state secretary also refuted statements of the prime ministers of Aruba and Curaçao that the Netherlands had come with new last-minute conditions at the last Friday’s Kingdom Council of Ministers. Aside from the Dutch Parliament, he has also sent a letter to the prime minister to clarifying a number of issues on which “confusion apparently has arisen.”

Knops explained that the Consensus Kingdom Law to establish the Caribbean Entity for Reform and Development COHO dictated that decision-taking by the Kingdom Council of Ministers takes place on the basis of implementation reports.

“This means that after the implementation of the law, there is no room for the setting of additional conditions outside the reforms from the country package. Naturally, the condition for the allocation of liquidity support remains that article 25 of the Financial Supervision Law [the deviation from the balanced budget norm – ED.] is declared applicable by the Kingdom Council of Ministers,” stated Knops.

The state secretary added that “until further order” the earlier additional conditions will remain part of the decision-taking by the kingdom government with regard to the allocation of liquidity support, also after the COHO law has been implemented. He mentioned as an example the labour conditions cuts for civil servants and semi-public employees and the measures in the healthcare sector.

No new conditions were set in the proposed decision-taking of the Kingdom Council of Ministers last Friday, Knops emphasised. The decision points concern conditions that were already set for earlier tranches of liquidity support, he noted.

“Conditions that are still in place, conditions that still have not been fully implemented or which are a result of earlier conditions, such as the wage subsidies and the standardising of top incomes. That also counts for the agreed upon salary cut. This concerns an earlier condition which, based on a decision of the Kingdom Council of Ministers, applies until further order.”

Decision-taking in Friday’s Kingdom Council of Ministers was postponed on Knops’ request, because Aruba, Curaçao and St. Maarten had refrained from a political commitment to the memorandum of amendment of the COHO Consensus Kingdom Law.

Knops explained that early December, he asked the prime ministers of the Dutch Caribbean countries to politically confirm the memorandum of amendment. He was subsequently informed that the matter would be dealt with in the Council of Ministers of the individual countries in the short.

“However, I did not hear back from them. Only after a reappeal from my side shortly before the Kingdom Council of Ministers meeting, the prime ministers informed me that the earlier agreement could not be politically confirmed. That is hard to understand considering earlier agreements and it worries me a lot,” he stated.

“The lack of political agreement brings up the question with the Dutch government which position the countries now have. I recognise that the countries generally work hard to execute the country package, but 2022 will be marked by (difficult) decisions and implementation,” stated Knops who doubted the intentions of the countries.

“The fact that the countries are not taking the next step in the legislation process, brings into question to what extent there is an honest will and willingness to seriously work on the consensus kingdom law. Now that it is unclear where the countries stand in this phase, it is not sufficiently certain for the Dutch government where we are,” he stated.

Knops noted that “under these circumstances” he saw it fit to propose to defer the complete decision-taking last Friday. “This provides us the opportunity to reflect on the question if and how we can enter a fruitful collaboration for the coming six years, taking into consideration the earlier agreements.”

The state secretary concluded his five-page letter with a message for the three countries. “The Dutch government has tried to close off this year in a different, positive manner. I have asked the countries to reflect this holiday period about the way forward. From the side of the Netherlands, we will do the same.”

Knops stated that the Temporary Work Organisation TWO, in anticipation of the COHO, will continue to work with the countries to implement the country packages and the reforms. “In the interest of the people of Aruba, Curaçao and St. Maarten, I wholeheartedly hope that together we succeed in continuing the agreed upon path.”