Home Headlines & Top Stories Knops says he did not act against rules to withhold liquidity... 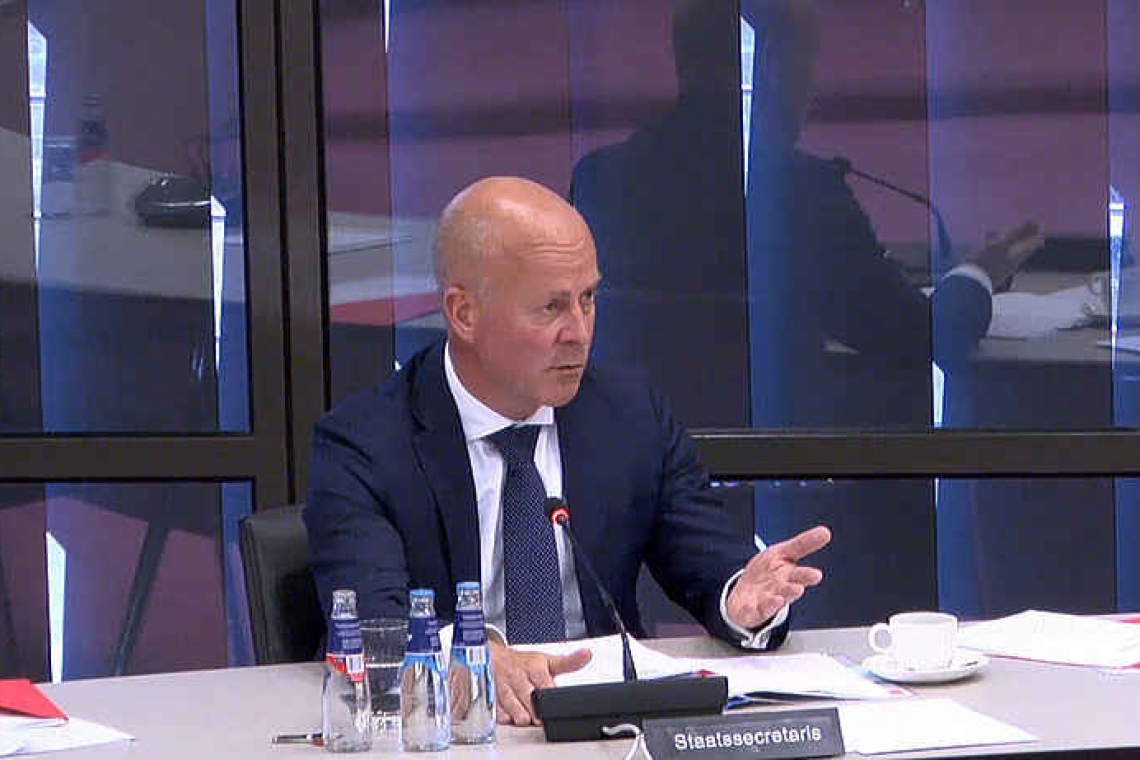 THE HAGUE–Dutch caretaker State Secretary of Home Affairs and Kingdom Relations Raymond Knops told the Second Chamber of the Dutch Parliament on Wednesday that he did not act against the regulations when he asked the Kingdom Council of Ministers to hold off on the decision to pay St. Maarten the fifth liquidity support tranche.

In a debate with the Second Chamber’s Permanent Committee for Kingdom Relations, Knops said the decision was up to the Kingdom Council of Ministers, and not to him. The reason why he went back to the Kingdom government to delay the payment of NAf. 39 million in liquidity support was because St. Maarten did not stick to the agreements.

“St. Maarten is a litany of disappointments. Agreements are simply not kept. It is almost structural. That does something with the relation of trust. The core principles of good governance are not adhered to,” said Knops, who criticised the St. Maarten government for not intervening and not taking decisions to secure good governance at the Princess Juliana International Airport while there were clear signs that things were amiss.

“More than three years after Hurricane Irma, the airport still has not been reconstructed, while we had agreed from the onset in the reconstruction talks that the airport was a number one priority. The airport terminal building could already have been rebuilt,” Knops said.

According to Knops, there was an active obstruction against saying yes to the 100-million-euro loan by the European Investment Bank (EIB) and the Dutch government for a much lower interest rate than an international commercial loan. “It is highly frustrating that powers from the outside had such an influence in this. Powers that don’t have the best interest of St. Maarten and its people at heart and who wanted to leave the local government to foot the bill,” said Knops.

Member of Parliament (MP) Jorien Wuite of the Democratic Party D66 in her informal maiden speech expressed concerns about the hardening of the relations and the communication within the kingdom, especially between the Netherlands and St. Maarten. “We are in a negative spiral. The relations are laced with elements of battle. Tolerance is at its end.”

According to Wuite, the relations within the kingdom require a different tone. “What we need in the kingdom is a stronger collaboration, a positive direction. Instead, what we see is a hardening of the relations and communication. Some people are saying, the chickens are coming home to roost. I am very worried,” said Wuite, who asked the state secretary how he intended to bring more nuance in the talks with St. Maarten, with more eye for equal relations and the island’s autonomous position.

Wuite, a former St. Maarten minister and minister plenipotentiary, steered clear of the discussion about the withholding of liquidity support and the airport, but MPs Attje Kuiken of the Labour Party PvdA, Don Ceder of the ChristianUnion and Sylvana Simons of the BIJ1 party did not.

The three MPs asked about the legality of Knops’ demand for good governance at the airport while the Kingdom Council of Ministers had already given the green light for payment on April 23. “The liquidity support for St. Maarten has been mixed with the airport. Why is that, and is that legal?” asked Kuiken. “Good governance is important, but so is liquidity support during this time of crisis,” she said.

Ceder even questioned whether Knops’ demand was constitutionally correct. “In my opinion, constitutionally you don’t have that instrument. To my knowledge, the airport was not part of the conditions for the fifth tranche. The liquidity support should be paid. And while I share the concerns of good governance at the airport, that matter is an entirely different discussion. Two issues are mixed and it could severely disturb the mutual relations between St. Maarten and the Netherlands.”

Ceder called it “unwise” and “unjust” for the Netherlands not to stick to the agreement. He said that everyone needed to adhere to the agreement, but that the Netherlands had to “give the right example.” He said the state secretary should not maintain that it was okay to keep moving the goal posts. He also pointed out that by not transferring the NAf. 39 million, there was a real risk of jamming vital processes in St. Maarten.

MP Simon said she agreed with Ceder. She said it was important to actively invest in the relations and to live up to agreements. She asked how it was possible that this matter could hold up the “direly needed” liquidity support.

“Why is this support not coming and when will it be released? What is the relevance of the airport with regard to the liquidity support? Was the airport part of the original conditions, and how does it relate to good governance,” asked Simons, who dared the state secretary to be “led by trust, based on equality.”

Knops said that good governance was “always the red thread” and that the situation at the airport was “serious.” “Too much has happened for us to just transfer the money and hope that things will work out.”

The state secretary said that no goal posts were being moved and that it was important for St. Maarten to deliver. “I want to see results, not just an intention. A solution is urgently needed at the airport. Good governance is a sine qua non condition. That is in the interest of the people. I am not here to just mind the shop, but to get results.”

Knops received support for his demands from MPs Aukje de Vries of the liberal democratic VVD party and Joba van den Berg of the Christian Democratic Party CDA. “It takes two to tango. Everyone needs to adhere to the agreements. It is not acceptable that one party does and the other does not,” said Van den Berg.

Van den Berg said that for the CDA it was “only logical” that support was provided during this crisis. But, she added, “This requires willingness and collaboration from both sides, whereby everyone carries their own responsibility.”

“The economies of the Dutch Caribbean countries have been hit very hard. We must be in solidarity. But it is important to tie conditions to the support. These conditions will only help the countries to hold up their own pants in the future. Providing support and money is fine, but financial management, tax collection and good governance must be in order,” said De Vries.