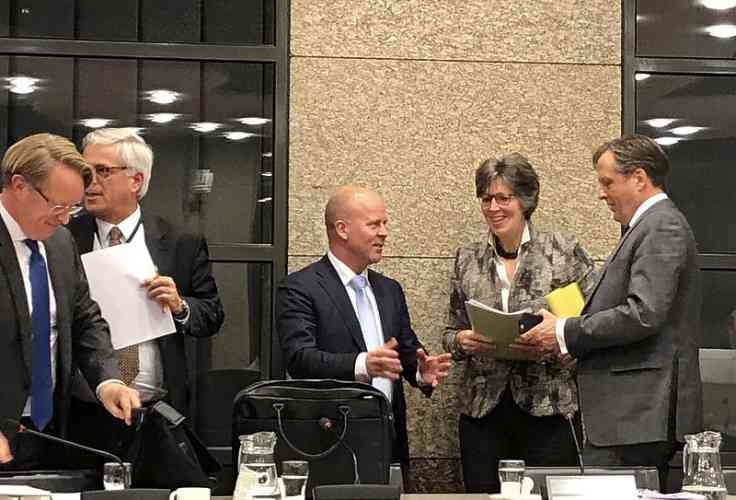 THE HAGUE–Local workers will be used as much as possible in the recovery programme for St. Maarten sponsored by the Dutch Government under the auspices of the World Bank, Dutch State Secretary of Home Affairs and Kingdom Relations Raymond Knops assured the Second Chamber of the Dutch Parliament during a debate on Tuesday.

Members of the Second Chamber’s Permanent Committee for Kingdom Relations pressed the State Secretary to make maximum use of local workers and companies since this would benefit the island the most during the recovery for which the Dutch Government has reserved 550 million euros.

“We have to use the local potential as much as possible,” said Member of Parliament (MP) Joba van den Berg of the Christian Democratic Party CDA, who spoke of the importance of having a “social return” on the recovery projects. Local, unemployed people should be trained to do the work, which prevents the import of foreign workers. By employing and training local people, the recovery funds will aid in combating unemployment and poverty, while at the same time jump-starting the economy, Van den Berg said.

“Where it comes to recruiting workers, we should give priority to the local workers, and if there are not enough we check whether they are available in the region. The Dutch economy is already doing great and our businesses are not in need of extra work,” said MP Liesbeth van Tongeren of the green left party GroenLinks.

MP Ronald van Raak fully agreed that the local workforce should be employed wherever possible. The same goes for the companies on the island; however, the work should not be granted to fraudulent, corrupt companies that want to abuse the situation. He mentioned last week’s raid at Windward Roads, a daughter company of the large Dutch construction company Janssen De Jong.

MP André Bosman of the liberal democratic VVD party asked whether the World Bank would be using local companies, and Dutch companies as a second option. He urged the State Secretary to forbid the World Bank to spend funds on consultants. “Things need to get done. We need roofs on homes, the repairing of schools, the hospital and other vital infrastructure. We don’t need consultants for that,” he said.

State Secretary Knops assured that local workers, companies and organisations would be used as much as possible during the recovery phase. Dutch companies might be asked for their expertise and input, but the Netherlands will not send an aircraft full of workers to St. Maarten, he said.

MP Antje Diertens of the Democratic Party D66, as well as several other MPs, expressed deep respect for the St. Maarten people, their resilience and their positive, hard-working attitude to rebuild their homes and their island. “They didn’t stand idly by and look to government for help. They got to work,” said Diertens.

MP Van Tongeren said that the “solidarity, flexibility and creativity” shown by St. Maarten deserved recognition from the Netherlands. She noted that it was important to involve the communities in the recovery and to look out for the vulnerable groups in society. “The poorer ones are always hardest hit by natural disasters,” said Van Tongeren, who urged the State Secretary to ensure that this group remained above the poverty line.

The State Secretary too praised the St. Maarten people. He also showed appreciation for the many non-profit organisations, volunteers and Dutch Defence for the work that they have done. “Despite the total destruction, people showed their resilience, the willingness to rebuild together. The Netherlands is there to help for we are part of the same family,” he said.

The reconstruction will take place together with the St. Maarten Government. This also means that sometimes measures have to be taken to ensure that the funds are well-spent and fully supervised. “Sometimes that hurts. Sometimes the message is not pleasant to hear, but in the dealing with this disaster we can set meaningful steps together,” said Knops, who hoped that things would stabilise politically after the February 26 elections.