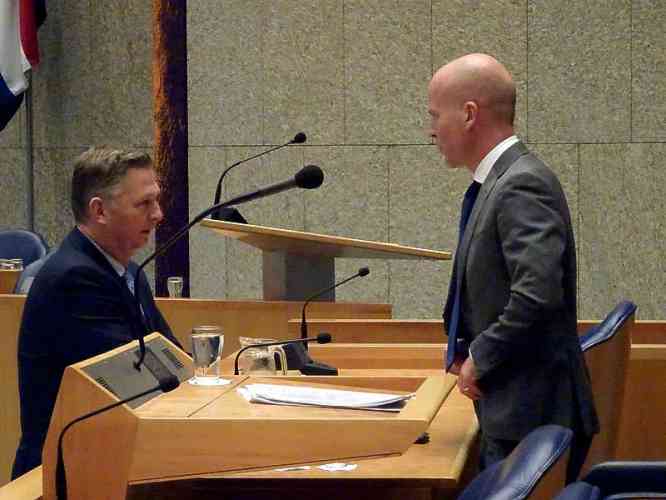 THE HAGUE–Dutch State Secretary of Home Affairs and Kingdom Relations Raymond Knops was unusually sharp in expressing his concern about St. Maarten during the continued plenary handling of the draft 2020 budget for Kingdom Relations in the Second Chamber of the Dutch Parliament on Thursday.

The State Secretary dedicated much attention to St. Maarten, the island’s governance, the reconstruction projects and the issue of undermining elements. “I am not saying everyone is corrupt, because I have met a lot of people in the past two years who work hard every day to make their country better, but there is too much corruption in the public administration.”

Knops showed appreciation for now former Prime Minister Leona Romeo-Marlin and a few dedicated ministers who, in his opinion, did “the best of their ability” despite the “great challenges.” He said there was an “active political obstruction of the intentions” as agreed on with the World Bank to rebuild St. Maarten with Dutch financing.

No words were minced about the attitude of some St. Maarten politicians. “As elected member of government, the people’s representative, you have to serve the interest of your country and your people. I have come across a number of examples in the past period that clearly indicate the opposite.”

St. Maarten is not in good shape: the consequences of Hurricane Irma are still visible, even though a lot has happened in the reconstruction, especially in the private sector. “But I am deeply concerned where it comes to the development of good governance, the way politics work, the many collapses of government and the political instability.”

Although it is a good thing that the people can express their opinion in the upcoming elections, he said the political situation undoubtedly would have an adverse effect on the speed of the reconstruction. In this reconstruction, the interest of the people come first, he emphasised.

“In our considerations, in everything we do, I will keep asking myself the question: What can we do as the Netherlands in the interest of the people? And, if that goes against the interest of politics, then so be it, because we didn’t give 550 million euros in Dutch tax money to help St. Maarten. We did that to help the people, but not to keep certain politicians in power,” he said.

The state secretary mentioned the reconstruction of the St. Maarten airport as an example of political obstruction. He said it was only logical that conditions for good governance were set when the Netherlands made US $51 million available as a grant last year in addition to a US $50 million soft loan from the European Investment Bank (EIB).

“You want to prevent government-owned companies from being used as cash cows by some individuals who want to fill their pockets with government money. I was surprised to see movements in the St. Maarten Parliament, but also within government, of people who did everything to torpedo that project, who came with proposals with loans involving much higher interest rates that would be a lot worse for St. Maarten and the airport than our proposal.”

According to Knops, the airport project developments were a clear example of where “politicians through obstruction, corruption and self-enrichment totally did not handle the matter in the interest of the people.” He made clear that he would not tolerate this. “I will do everything to prevent this. It can’t be that undermining wins and that people with bad intentions, serving their own self-interest end up on the winning side.”

The state secretary called upon the St. Maarten Parliament to take its responsibility and to always act in the best interest of the people. “Then you can eliminate all emotions about where the money comes from, and you can only think: What is in the best interest of my people?” He called on the people to “vote for those parties and those candidates who truly want to advance St. Maarten, and not those who have shown that they are only there for themselves.”

Knops was very critical of the lack of action of the St. Maarten Parliament to approve legislation to combat money laundering and the financing of terrorism. He called this behaviour by Parliament “irresponsible”. He warned that if this legislation was not approved very soon, St. Maarten risked far-reaching international measures that would affect banking services. “Tourists won’t be able to get cash. ATMs will stop working.”

Knops said the Netherlands really wanted to help with the airport, the dump and good governance. He said the positive feedback of many people strengthened his belief that the efforts to assist must continue.

As for cooperation with local politics, he said: “It is possible that there will be more resistance. But saying that we will pull back would be the worst thing to do, because then we would let the people down, and the progress and reconstruction wouldn’t happen. We will continue, but we do have standards where it concerns integrity and good governance.”