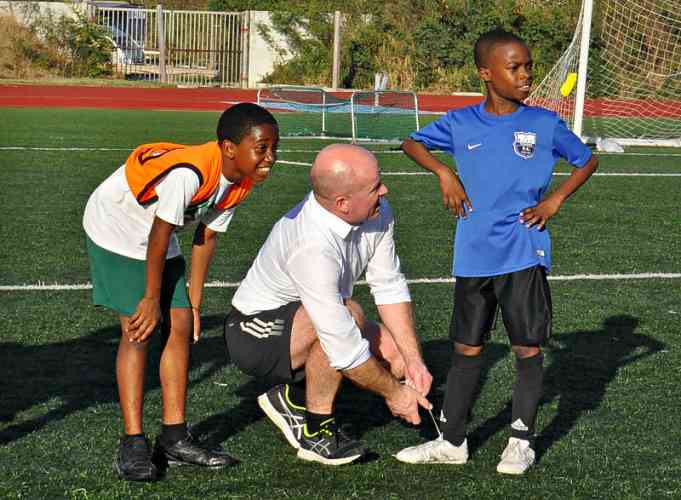 PHILIPSBURG–Wanting to get a first-hand impression of the progress of the early recovery projects, Dutch State Secretary of Home Affairs and Kingdom Relations Raymond Knops paid a visit to the Sundial School kitchen, assisted with handing out breakfast at Sister Regina School and helped with a clean-up in Cole Bay on Friday morning.

Knops, who ended his two-day visit to St. Maarten on Friday, visited in the early morning the Sundial School kitchen in Philipsburg where breakfast and lunch are prepared for 4,800 primary school pupils as part of a Red Cross project.
He then proceeded to Sister Regina School in Simpson Bay to assist with the handing out of breakfast.

Knops also showed his hands-on approach in Cole Bay at the site of the clean-up project under the auspices of the United Nations Development Programme (UNDP). This project provides jobs to 500 persons who are receiving a daily stipend for cleaning up the island within a period of 20 days.

Next was a visit to the micro-financing organisation Qredits in Pointe Blanche where small entrepreneurs can arrange a soft loan to rebuild their businesses. Knops was pleased to hear that so far Qredits has already provided 30 loans to a total of US $600,000; 22 loans in St. Maarten and the rest in St. Eustatius and Saba. Qredits will provide up to 90 low-interest business loans for small entrepreneurs and start-ups, to a maximum of $50,000 each.

“It is good to see that these persons are able to continue their business through this loan,” Knops told The Daily Herald.

The Qredits micro-financing, school meal programme and the clean-up project are parts of the early recovery project phase for which the Dutch Government has made seven million euros available in anticipation of the larger recovery programme that will be executed by the World Bank starting in April.
“These projects are an important step up to the much larger projects as part of the recovery programme,” said Knops.

Knops had visited three other early recovery projects on Thursday: two homes that are being restored as part of the rebuilding of 100 homes of the elderly by the St. Maarten Development Fund (SMDF); the training course offered by White and Yellow Cross Care Foundation to retrain some 40 persons as construction workers or for jobs in the health care sector; and later that afternoon the United Nations Children Fund UNICEF and Royal Netherlands Soccer Association KNVB life-skills through sport project for youngsters.
Referring to the White and Yellow Cross retraining programme, Knops said investing in local workers was an important aspect, especially in the construction sector which is facing a huge shortage of trained personnel. Retraining these persons so they can work ensures a livelihood for them, he added.

Asked about the progress with the start of the larger recovery programme for which the Dutch Government has reserved 550 million euros and the negotiations with the World Bank, Knops said the consultations were ongoing according to plan. A Master Plan is being drafted from which the projects and associated funding will be derived. There will also be a budget and execution plan.

A large part of the 550 million Recovery Fund, to be executed through a trust fund construction, will be in low-interest loans. The group of vulnerable persons in the community will be a priority, as well as the public infrastructure, including schools. Rebuilding hurricane-proof is a given. The Fund will not be large enough to repair all the damaged homes on the island, he said.

“The total estimated damage exceeds two billion US dollars, which is far more than the Recovery Fund,” he said, adding that the idea was that the Fund would help to restart the economy.

The process to arrive at a final agreement with the World Bank has been taking some time due to the technical and legal complexity of the matter. It is an unusual construction, said Knops. Usually the World Bank works with a donor and recipient from two individual non-related countries. However, in this case it concerns two countries within the same Kingdom, he explained.

As for the choice of the World Bank, he reiterated that not only was the World Bank a knowledgeable organisation well-equipped for this job, but the Ministry of Home Affairs and Kingdom Relations BZK also did not have sufficient in-house capacity for such a large, complex operation.

Knops denied rumours that the World Bank would be taking 10 to 15 per cent in commission from the Recovery Fund. He assured that the commission would be lower, but said this was still being negotiated. He emphasised that the objective was to utilise the money as much as possible for projects that benefited the people and the economy in general.

Regarding the landfill, he said he had offered to assist in finding a long-term solution in conjunction with French St. Martin. “This is a top priority, but a part of the funds will only become available in a cooperation with the French side,” he said.

Asked his view about the general status of the island, Knops said the biggest difference he had noted between his visit late November and now was the relative liveliness of Philipsburg. “Many stores are open, there are people about, cruise ships are visiting.” However, he added, “A lot still has to be done in the districts and the hotels need to be rebuilt.”

Knops main reason for his urgent visit to the Windward Islands was the direct intervention of The Hague in St. Eustatius where the Island and Executive Councils were sent home, to be replaced by a Dutch Government Representative. Knops met with government officials and attended a town hall meeting.

“The State people deserved an explanation as to why we had to take this far-reaching measure. Naturally, not everyone agreed with this measure. I did not expect everyone to applaud, especially not the group that was taken off their position,” he said.
However, many persons did express their support, mainly people who did not agree with the problematic situation that existed until now or who had become victims of government’s actions, he said.

He rejected accusations of colonial behaviour by the Dutch Government. “Playing the colonial card, comparing the situation to Indonesia is taking things out of context. Besides, this would mean that the Netherlands could never be critical of an urgent situation. Our intentions and objective are merely the best interest of the people,” he said.