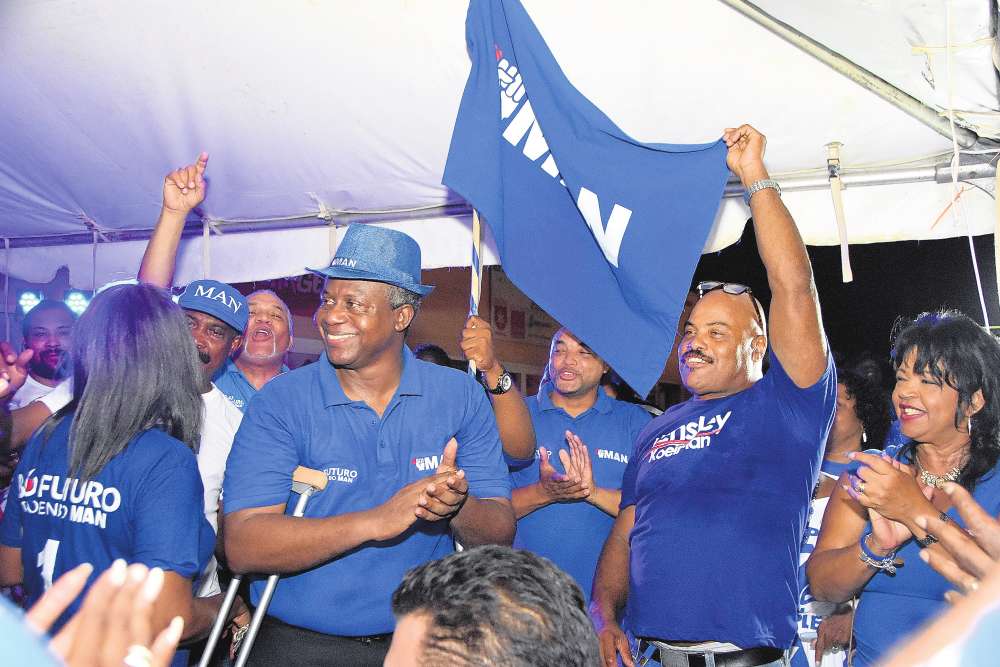 WILLEMSTAD–Now that MAN has become Curaçao’s biggest party its new political leader Hensley Koeiman says the people gave him a responsibility and he will carry it. “Partido Alternativa Real” (PAR) led by Zia Jesus-Leito seems a likely coalition partner.

“Pueblo Soberano” (PS) of Prime Minister Ben Whiteman and led by Jaime Cordoba dropped to 5,393 votes and will now have two instead of five representatives in Parliament. The People’s National Party (PNP) led by Humphrey Davelaar got 6,922 votes, also good for two seats.

The biggest loser was current coalition party PAIS led by Alex Rosaria, which lost all its four seats with only 3,651 votes, just short of the seat quota that stood at 3,764 votes.

PAS of ex-MAN leader Charles Cooper also failed to win a seat with 3,445 votes, as did the all-female list of the Democratic Party (DP) with 1,966, “Movementu Kousa Prome” (MKP) of former PS Education Minister Rene Rosalia with 1,921 and “Pro Korsou” of former PS Prime Minister Ivar Asjes with 1,137.

Governor Lucille George-Wout has meanwhile started her consultations in connection with talks to form a new government. The expectation is that someone from MAN as the biggest party will be tasked with exploring the possibilities, even though MFK and PAR ended up with the same number of seats.

A coalition that includes MAN, PAR and PNP appears to be the first option, but with a combined 10 seats would still lack one for a minimal majority in the 21-seat legislature. Either MP or UKH is therefore likely to be added, with a possible 3-3-2-1 division of the nine ministers.