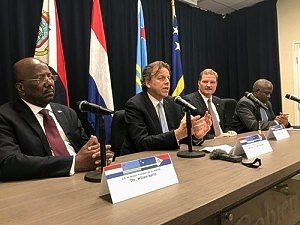 THE HAGUE–Dutch Minister of Foreign Affairs Bert Koenders said after his meeting on Tuesday with the Prime Ministers of Aruba, Curaçao and St. Maarten that he found it important as a Kingdom representative to be informed about the foreign interests and priorities of the islands.

“That enables us to take these into account within the foreign policy of the Kingdom,” said Koenders following the annual Kingdom Consultation Foreign Relations with Prime Ministers Mike Eman of Aruba, Hensley Koeiman of Curaçao and William Marlin of St. Maarten. Koenders chaired the meeting.

Developments in the Caribbean region featured prominently on the agenda of this meeting that took place in Aruba. The Prime Ministers and Minister talked about the entry of the Dutch Caribbean countries in the Caribbean Community Caricom as associated members. Also discussed were the possible scenarios on how to deal with the crisis in Venezuela.

Developments in Venezuela can have a detrimental effect on the Kingdom, said Koenders who expressed great concerns over the situation in Venezuela. He told the media that the Kingdom should remain “highly alert.” Without wanting to resort to “automatic pessimism,” the Minister said that there was “no reason to be naïve.”

“The economic, political and humanitarian crises are deepening. I am also very worried about the human rights situation there,” said Koenders, who added that the “broad relation” that the Kingdom has with Venezuela makes it possible to address these fragile issues.

At the same time, the Caribbean region also offers opportunities such as the opening up of Cuba and the peace in Colombia. The relation with the United States (US) remains important, because the US and the Kingdom have shared interests in the region in the area of safety and stability, but also where it pertains to sustainable development and the energy supply.

Koenders announced at the joint press conference that the Dutch embassy in Caracas has been lobbying for the payment of the arrears by Venezuela authorities to InselAir and Air Aruba for the sale of airline tickets.

The Dutch Minister had a separate meeting with William Marlin to talk about issues that affect St. Maarten as an autonomous country within the Kingdom. One of the topics was the agreement that needs to be signed between the United States (US) and the Kingdom in order to introduce a pre-clearance system at the Princess Juliana International Airport SXM.

Koenders further met with Aruba Governor Alfonso Boekhoudt and the Aruba Council of Ministers. Today, Thursday, he will be in Curaçao for a meeting with caretaker Prime Minister Koeiman, members of the Task Force Venezuela and Dutch Naval Commander in the Caribbean Hans Lodder. The Minister will also visit an exhibition about the refinery’s 100 years in existence on Curaçao.

As Minister representing the entire Kingdom, Koenders said that he strived to visit the Dutch Caribbean countries at least once a year. Last year this visit didn’t materialise for several reasons. However, in the meantime there has been frequent contact about issues of mutual interest.