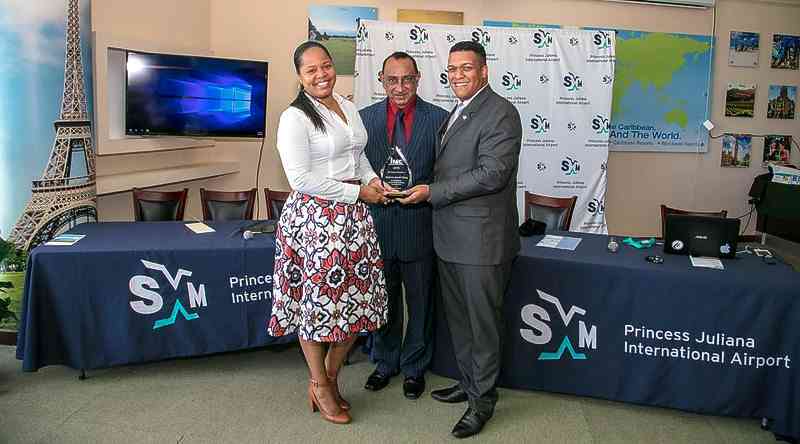 PELICAN–Stephania Kong-Gumbs head of the Princess Juliana International Airport (PJIA) delegation at the recently-concluded twelfth annual Islands Airport Safety Committee (IASC) conference at Simpson Bay Resort, was presented with the Committee’s Award of Excellence. The conference came to a close on Friday.

The Committee discussed issues related to all aspects of operational safety at aerodromes from Monday through Friday, May 21-25. PJIA hosted the conference, which attracted delegations from Antigua and Barbuda, Anguilla, Aruba, Bonaire, Curaçao, Saba and Suriname.

Participants also included St. Maarten Civil Aviation Authority Section Head Shaka Lake. The PJIA Committee members were surprised to hear the news that the first IASC Award of Excellence was awarded to Kong- Gumbs, who serves as a quality assurance officer at PJIA with Manager Connally Connor and Deshawn York. The three were elated with the accolade and praised the airport managing board for granting them the opportunity to host the conference in spite of the financial constraints the company is facing.

The conference programme was designed to offer participants an opportunity to engage in interactive sessions and observe how PJIA continues to recover from the devastation and aftermath of Hurricanes Irma and Maria.

The delegations engaged in a safety audit for two days and presented their findings to management. The safety audit by an independent non-punitive committee is essential, as it would reveal the deficiencies that exist at the airport.

“The audit would serve to help PJIA to better improve the standards and recommended practices mandated by the International Civil Aviation Organisation (ICAO),” according to a statement from the airport on Sunday.

IASC Chairman Dharmindra Phalai informed the delegations that PJIA will receive the written version of the audit report no later than six weeks after the end of the conference. The Quality Assurance Department will prioritise the high-risk findings and implement the necessary mitigation measures.

Phalai announced during the closing ceremony that the Heads of Delegations committee had agreed to appoint Jonathan Hoepel as the first IASC Public Relations Officer for a period of four years. Hoepel announced that he had presented two safety proposals to the IASC board, which were met with approvals and should be implemented accordingly.

It was also determined that the presence of the United Statas Federal Aviation Administration (FAA) would be welcomed at the annual IASC meetings.

The 2019 IASC conference will be hosted in Suriname. 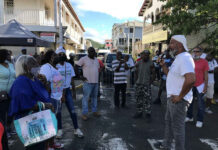