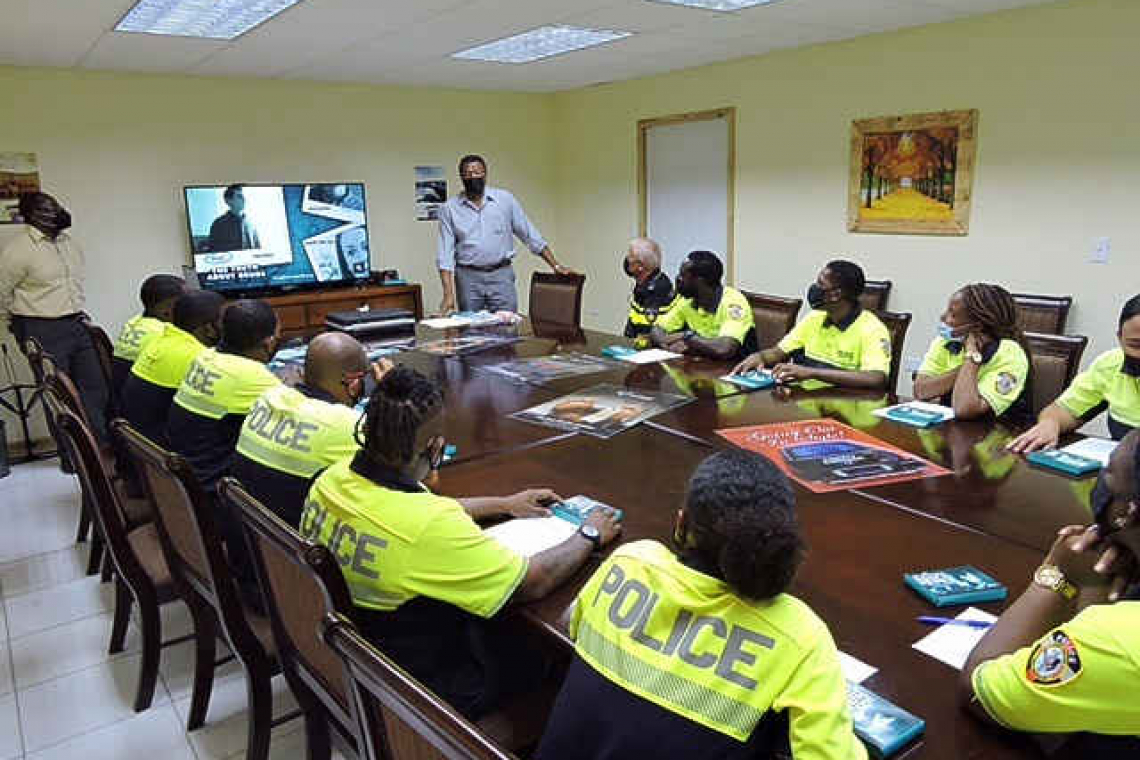 Dr. Lloyd J. Richardson as he speaks to KPSM Academy members.
PHILIPSBURG–Turning Point Foundation, leading local authority on substance abuse, addiction, and drug rehabilitation, provided in-depth training to members of the St. Maarten Police Force KPSM Academy on Thursday, May 27, according to a press release from Turing Point on Friday. 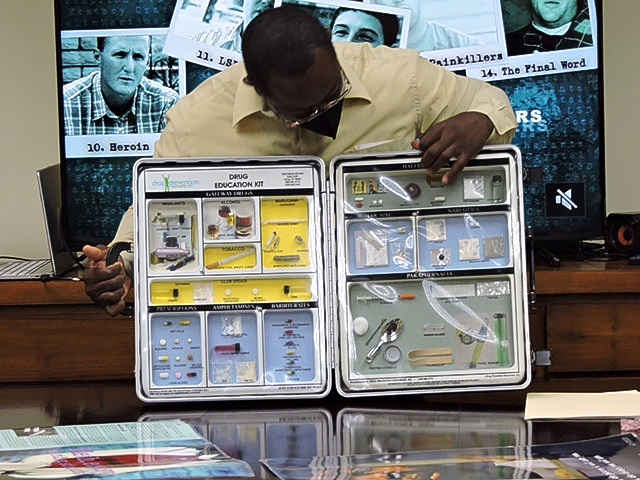 Oliver Wilson demonstrates the different narcotics and their associated paraphernalia.

Twelve trainees were welcomed by Dr. Lloyd J. Richardson, Turning Point founding member and President of its Board, who provided a brief history of Turning Point. Before leaving to attend other engagements, he touched on the increased demand for rehabilitation facilities due to the effects that Hurricane Irma and the global COVID-19 pandemic had on the economy and the psychological imbalances in individuals, which resulted in a noted increase in substance abuse and other addictions.

The training began with participants being shown short advertisements covering numerous drugs on the market, even in St. Maarten. They were educated on the differences between categories such as gateway drugs, party/club drugs, prescription pills, amphetamines, barbiturates, hallucinogens, cocaine, narcotics and their associated paraphernalia.

In conjunction with the ads, participants were able to view in person life-like representations and paraphernalia of the substances reviewed.

Trainees received informational packets made up of questionnaires to test one’s basic knowledge of drugs as well as 14 booklets each covering relevant substances.

“A featured portion of the training sessions were videos of hard-hitting interviews by real people sharing their personal experiences with drug use. On conclusion of the training, KPSM Academy attendees determined that these kinds of candid, real-life experiences might be a significantly more impactful method of reaching the young people here in St. Maarten,” said the release.

In the final stages of the training, Dr. Maccow-Thomas provided another presentation focusing on both the short- and long-term effects of substance abuse that the Police Academy can use in schools around the island.

A question-and-answer session concluded the day’s training with Dr. Maccow-Thomas answering the trainees’ questions surrounding the causes of the growth in drug use and other addictions, particularly in St. Maarten, “thus intensifying the need for rehabilitation counselling on our islands,” said the release.

KPSM Academy deemed the training to be informative and constructive, a definite success for Turning Point staff.

“The day ended with a renewed intent on the part of both organisations to continue strengthening collaborative efforts with ‘like-minded’ organisations as together they combine efforts to foster community awareness on the dangers of drug and alcohol consumption,” said the release.