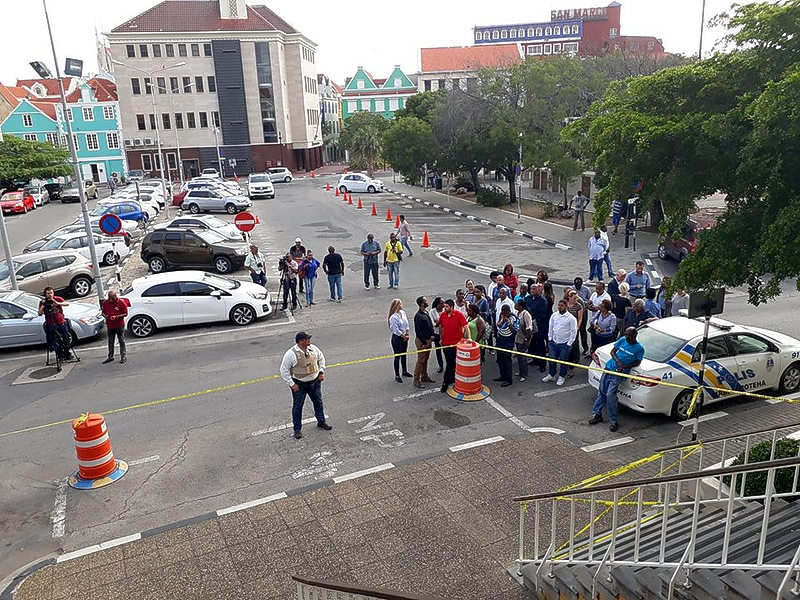 WILLEMSTAD–During the first day of the “Maximus” trial against Burney “Nini” Fonseca as the suspected intermediary between the killers of then PS-leader Helmin Magno Wiels and those who paid them, convicted triggerman Elvis “Monster” Kuwas apologised to the family of the late parliamentarian. Two familiar names surfaced once more as possible intellectual authors of the “hit” on May 5, 2013, at Marie Pampoen.

Fonseca followed the proceedings via video conference from his cell in the Netherlands, where he is serving time for drugs trafficking and money laundering. He is considered the link between those who ordered the political assassination and the executors, who have already been sentenced in the “Magnus” case.

Fonseca refused to talk. At the end of the day prosecutors demanded 26 years prison against him for his role in organising the murder.

The persons again mentioned as the probable brains behind the crime were former Minister of Finance during the Schotte-cabinet George “Jorge” Jamaloodin and his half-brother, lottery boss Robbie dos Santos.

According to Kuwas, Fonseca had first approached Luigi “Pretu” Florentina, who after being arrested committed suicide in his police cell in Barber. Florentina then contacted Kuwas.

The latter said he was promised NAf. 250,000 to murder the outspoken politician. “The next day I went to ‘Panchèk’ (Kuwas’co-defendant in the Magnus-case D’angelo “Panchek” Damascus – Ed.) to get the money. I was paid NAf. 100,000 cash. They promised me that I would receive the rest later. This is what Pretu told me,” Kuwas stated in court.

Another member of the No Limit Soldiers (NLS) gang apparently involved had been Raul “Bolle” Martinez, whose decapitated body was found near Playa Kanoa just days following the incident, soon after police tracked down the getaway car. He allegedly dumped the murder weapon that was later found in the Waaigat inlet.

Kuwas, who was irrevocably sentenced in appeal by the High Court to 30 years in prison, also said that he does not want to lie anymore and thinks the relatives of Wiels are entitled to know the truth. “I do not want to protect Fonseca anymore. He’s a jerk!”

Helmin’s brother Aubert Wiels said afterwards he did not believe Kuwas had shown sincere remorse. “It’s a professional assassin who has no feelings,” he reacted.

There were several other witnesses who testified that they saw Jamaloodin give money to Fonseca. Some of these used to work at Speedy, which is a security company owned by the former minister. They were supposedly fired because they testified against their boss.

Jamaloodin is currently behind bars in Venezuela and is awaiting his transfer back to Curaçao based on law enforcement cooperation protocols, because there is no extradition treaty between the two countries.

Testimony indicates that Fonseca was angry at Wiels because the latter didn’t agree with a plan to develop the soccer field in front of the suspect’s his home in Kaya Chi Ku Cha, Koraal Specht. However, indications are also that pressure to get rid of the maverick politician increased after statements he made about the sms2win lottery on May 3.

The trial continues on Friday with the plea of a defence team.