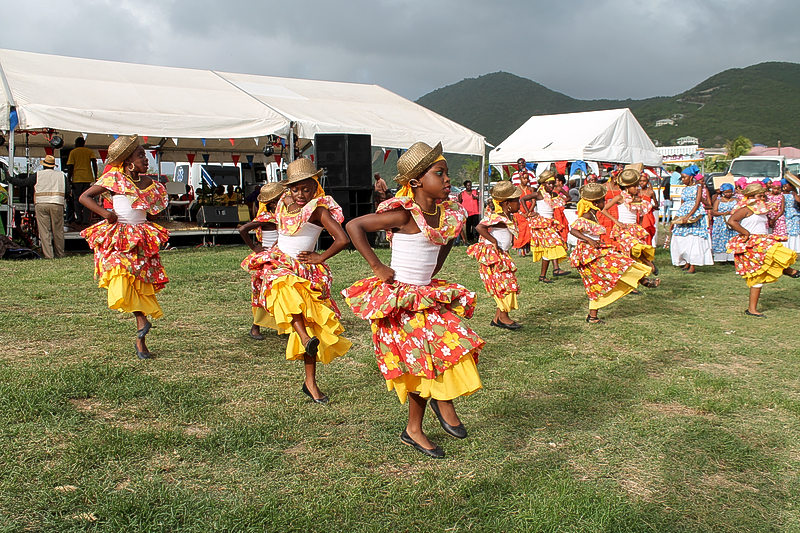 MARIGOT–The historic cultural grounds of St. Louis hosted the annual Rambaud St. Louis Freetown Fête on Sunday, a reminder that a legacy of cultural activities always existed in this village and who better to revive them than the Rambaud St. Louis Fête Association under the leadership of President Etienne “Rocky” Andrew.

The many visitors coming and going throughout the day enjoyed the traditional food and drinks stands, saw presentations of doll making, milking a cow, or traditional hair-wrapping and much more, while listening to the sounds of Tanny and the Boys.

This year the organisers exceeded expectations by creating a model of a traditional Creole house, complete with furniture and original artefacts, presenting a snapshot of how people lived back in the day.

It particularly caught the attention of invited Dutch-side Minister of Culture, Sports and Youth Affairs, Silveria Jacobs on a tour of the different booths and cultural displays with Etienne Andrew.

Outside there were fish pots, a pestle and mortar to pound arrowroot, bath pans, laundry wash board and various vegetables and tea bushes.

Minister Jacobs commended the Rambaud St. Louis organising committee for bringing along other associations and making the Fête bigger and better.

“It was especially heart-warming to see the time and effort that went into the re-creation of a traditional house from back in the day, depicting how St. Martin families lived in simple and clean surroundings, learning self-sufficiency and survival with the little that we had then,” she said. “Many of the artists were proud to display and explain their craft and many expressed concern of there not being enough interest in seeing cultural art forms continue,” she added. “As Minister I can echo their sentiments and pledge to work towards mandating those cultural arts and crafts, as well as the preparation of local food and drinks being structurally taught in schools.”

Children’s activities started in the afternoon with jumping in the bag races and lime in the spoon races.

The Grain D’Or dancers performed as did the Generation New Status Band STM, the SXM Majorettes twirling band and the Coralita Drum Band from the special needs institute SESSAD.

There was a presentation of cultural wear with ladies dressed in traditional frocks. And two performers from the La Savane and Grand Case Community minded group showed that old men with walking sticks can still cut some cool moves on the dance floor.

Jeanette Kobelt read out a poem dedicated as a tribute to the late Inez Baly Lewis. The poem was presented to one of her relatives by Etienne Andrew.

Following the church service a wreath was laid at the painted stone plaque in memory of the late Laurelle “Yaya” Richards.

Many of the invited guests came from the senior citizen’s homes from both sides of the island. Emcee for the Fête was Dutty Sham who kept everyone entertained, mimicking the multi-cultural accents of the community.