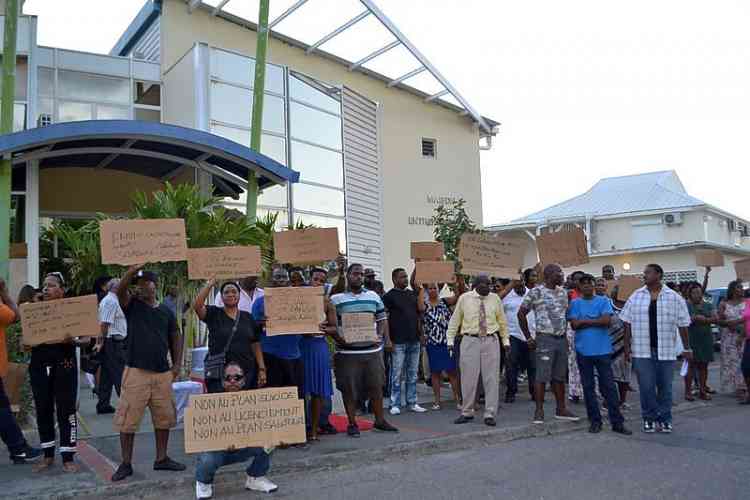 MARIGOT–Union spokesman for the Belmond La Samanna Hotel employees Julien Boirard said Wednesday that the employees will not accept being put on seasonal contracts, as put to them by the hotel management, when the luxury hotel re-opens at the end of 2018 as planned.

Boirard said the conflict centres on the issue of permanent or seasonal contracts, with the union standing its ground to have permanent contracts for its employees.
“The hotel wants to fire 138 employees, but re-hire them in December only on nine-month seasonal contracts, and that is not acceptable,” stated Boirard following a meeting with employees and their lawyer. “Eleven employees at management level are being retained on a full-time basis.”

The hotel has taken this action reportedly for “economic reasons.”
Boirard said the employees are currently two months into a three-month negotiating process between the hotel management and the employees’ union. The negotiation process ends on April 29.

“Negotiations have not been progressing positively,” he said. “Every time we meet with the General Manager and make counterpropositions he has to relay that on to the Belmond owners in London and that’s why this process is taking a long time.
“With seasonal contracts we have no job security. There is nothing in a seasonal contract to benefit us. Already banks and credit institutions have stopped financing our personnel. They can’t get loans and that’s a social consequence of the hotel’s new business plan. That’s 138 families unable to rebuild their homes and put their lives back in place after the hurricanes.”

With the hotel closed since Hurricane Irma, Boirard acknowledged employees are being compensated under the State’s partial unemployment benefit scheme, but some contracts come up for renewal at the end of March. He insisted the State pays 70 per cent of the salary only on the minimum wage.

President of the Collectivité Daniel Gibbs said he would not intervene yet to let the negotiation process run its course and would intervene if necessary when a final decision is reached.

“We are hearing both sides of the issue and obviously we want to keep the employees in work, but there’s no final decision yet. I understand the instability the employees feel, especially now after the hurricanes. And some of the employees have been there 30 or 40 years.”

La Samanna’s General Manager Michael Schoonewagen had not responded to The Daily Herald’s request for an interview up to press time Wednesday.