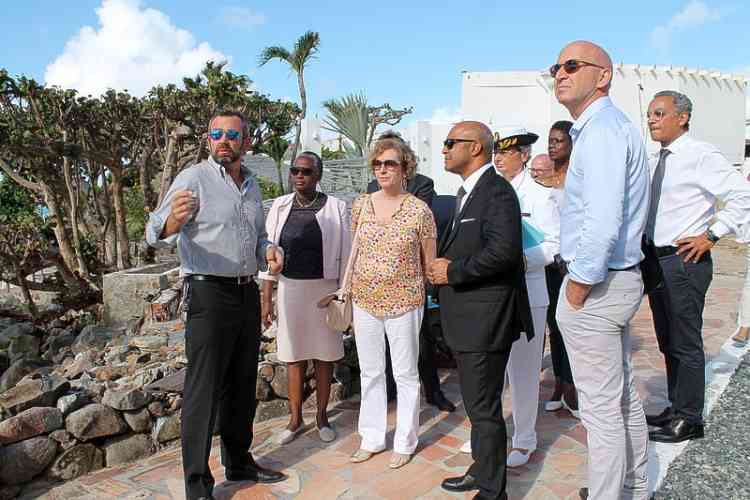 MARIGOT–Minister of Labour Muriel Pénicaud announced, during her visit on Saturday, five measures that have been implemented to help St. Martiners recover, to stimulate a resumption of economic activities and to maintain or create employment.

In the first measure there has been an adaption to the general labour regulations on partial unemployment (chomage partiel) to suit the present situation in St. Martin. Businesses can apply for partial unemployment status (as in the case of businesses not functioning due to hurricane damage, no revenue, etc.) up to June 2018 but that has now been extended to November 2018.
Normally, government reimburses the employer who must guarantee 70 per cent of the employee’s gross salary and the remainder is compensated at 7.74 euros per hour but cannot exceed a ceiling of 1,000 hours or about six months. This limit of 1,000 hours has been removed and businesses can continue to apply for the partial unemployment throughout most of 2018.
However, in the case of hotels, employees who follow a professional training programme from the OPCALIA initiative are guaranteed their salaries, are paid 100 per cent and at no cost to the employer. If there is no training scheme involved, government assistance is limited to 7.74 euros per hour.
The second measure concerns businesses that need to dismiss an employee because of economic reasons. Employees who have more than two years seniority have to be paid and must be offered the Contrat de Securisation Professionnelle (CSP), a tripartite agreement between employee, employer and Employment Office.
If the CSP is accepted the employee will receive 85 per cent of his normal salary. But the notice period of pay (normally two to three months) which is normally paid to the employee is instead paid to the Employment Office which will subsequently compensate the employee for the loss of his job. Pénicaud has waived the obligation for businesses to pay this notice period to the Employment Office.
In other changes a dismissed employee does not have to have a face-to-face interview with his employer, but it can be done at a distance, so the employee does not have to return to St. Martin. An example is an employee who left the island after Irma and was subsequently dismissed by his employer. Also, unemployed persons can register at the unemployment office online, and not have to go in person to the office.
In the third measure, the government will temporarily adapt the labour laws in January 2018 to deal with the consequences of Hurricane Irma to favour a relaunch of economic activities and to respect rights of employees.
One of the changes proposed concerns the dismissal procedures for economic reasons. Normally once an employee is dismissed the employer cannot hire again for one year. Breaking that rule is considered an abuse of the law. However, a modification will now allow businesses to re-employ immediately, even if it’s only temporarily.
Creation of an apprenticeship centre in St. Martin is the fourth measure proposed. This Centre de Formation d’Apprentis (CFA) is proposed for young people to train for various jobs available in the tourism sector. It has come in for some criticism from former Collectivité President Alain Richardson, who said the centre does not meet the immediate needs of the territory.
“If no companies wish to take on an apprentice, then the centre won’t be serving a purpose,” he said. “It’s regrettable that the branch of the adapted regiment of military service (RSMA) has not been validated for St. Martin. RSMA is a fully integrated centre where young people have the workshops to learn all the different trades.
“There is a great need now for construction work. In my opinion RSMA would have been the most effective structure for training. Besides, it’s in a military setting that transmits principles of citizenship, discipline, morals, values and so forth.”
The fifth measure concerns reinforcement and centralisation of labour-related structures in St. Martin, and more services to cater to the youth, not only in terms of employment, but with health and lodging issues, in conjunction with the Collectivité.
Pénicaud said before her departure: “I decided in collaboration with the Collectivité to rapidly adapt the regulations and programmes administered by the Labour Ministry in a specific context to better meet the needs and concerns of short- or long-term employees, job-seekers, the youth, and companies. The goal is to transform this crisis into opportunities for a better future.”