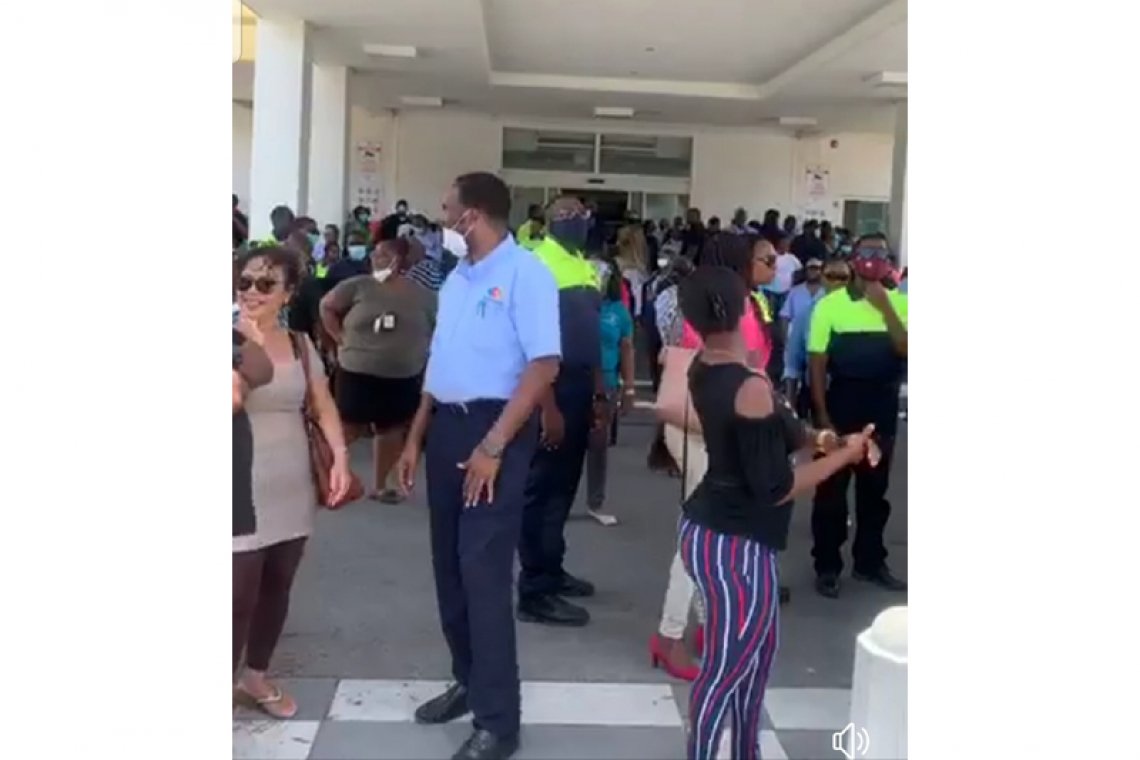 Union members crowded in front of the government building on Thursday afternoon.

PHILIPSBURG–Members of the labour unions congregated en masse in front of the government building on Thursday May 28 with their union leaders as they demanded to meet with the Council of Ministers. Their leaders were later allowed in the building for talks.

The unions assembled at the Little League Ball Park in Philipsburg in the morning where president of Windward Island Chamber of Labour Unions (WICLU) and Windward Islands Teachers Union (WITU) Claire Elshot provided members with an update regarding the ongoing conversation in the cost-cutting measures to be implemented by government.

Elshot read to members a letter drafted by the labour unions which they had planned to deliver to the Council of Ministers that afternoon. This letter listed a set of counter proposals regarding the 12.5 per cent cuts on personnel salaries, vacation allowance and more.

The counter proposal, from the union to the Council of Ministers, lists a 100 per cent vacation allowance pay for 2020. The unions said they are willing to negotiate a 50 per cent cut of the Cost of Living Adjustment (COLA) from 2012-2019 pending the outcome of St. Maarten’s economic performance and government’s financial position during said period 2021-2022.

The list continues to state a poverty line study to be initiated in collaboration with the University of the St. Martin (USM) and the Consumer’s Coalition by July 1 to establish the actual poverty level in St. Maarten; the implementation of a new/broadened Basket of Goods decree by July 1 that consists of at least maximum prices for basic goods such as (food, internet, water, rent, electricity, phone bill, etc.).

The unions also requested lowering the cost of basic needs by at least 12.5 per cent by July 1, until further notice. This includes food, internet, water, rent, electricity, phone bill, etc.

The accelerated placement process of the police force before July 1, initiating implementation of an Economic Stimulus Plan by July 1 and increasing the fees for directors from NAf. 500 to NAf. 1,000 were also proposed to the Council of Ministers within the letter.

The unions further directed the Council of Ministers to the previous counter proposal that was submitted on May 14 for further possible cuts.

“The unified unions are demanding that a poverty-line study is conducted as soon as possible and the cost of living on St. Maarten is reduced immediately by 12.5 per cent to ensure all citizens of St. Maarten, in particular our brothers and sisters in the private sector, too can receive relief,” according to the statement.

The union representatives and dozens of their members congregated in front of the government building for hours demanding to be addressed by the Council of Ministers.

The unions were later able to meet with the Council of Ministers during the evening hours.