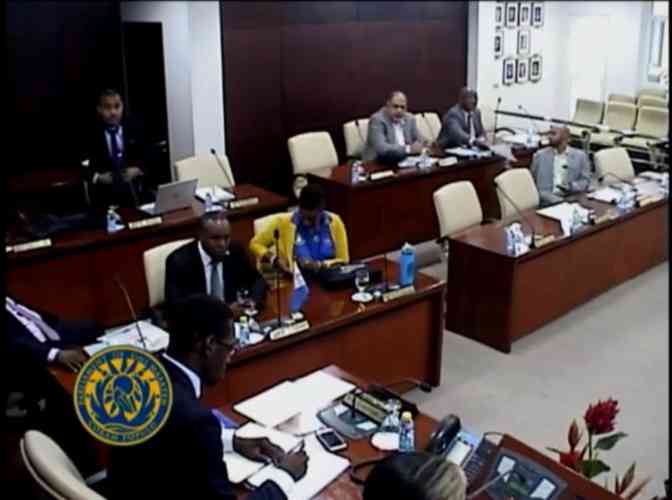 PHILIPSBURG–Parliament could not continue its plenary sitting on Friday morning on the amendment to the national ordinance on land taxes in connection with international obligations for the want of a chairman.

The meeting, with Finance Minister Perry Geerlings’ present, was first in danger of having no quorum when the eighth needed Member of Parliament signed in just before the clock struck 10:30am, the 30-minute mark after the official meeting start time.

The start was, however, short-lived. After dealing with notifications, Members of Parliament were to start their second round of questions to ministers. This could not occur because first on the speaker’s list was Parliament Chairwoman Sarah Wescot-Williams. She could not because based on Parliament’s Rules of Order, she could not question the minister and chair the meeting.

The chairmanship of the meeting could not be passed to anyone else, necessitating the suspension of the sitting until further notice.

Second vice chairman MP Claude Peterson (St. Maarten Christian Party) was absent with notice from the meeting. And, there is no deputy chairman since the suspension of MP Theo Heyliger in February.

Opposition National Alliance issued a press release Friday night saying there appears to be a lack of interest in the law amendment from coalition members as only four coalition MPs were present. They left it up to opposition members to sign in to form the needed quorum.

NA also queried whether Wescot-Williams was setting a precedent by opening a meeting “even though she was not allowed to chair it, and even though there was no quorum at the time that the gathering had begun 30 minutes after the scheduled time.”

“Based on the lack of interest and what appears to be a boycott by the coalition to such an important meeting, the National Alliance faction questions if there is indeed a lack of support within the coalition for this law,” according to the release. “It is also troubling to note that the MP Wescot-Williams would open a public meeting which she knows cannot legally occur; a postponement would have been a wiser decision.”