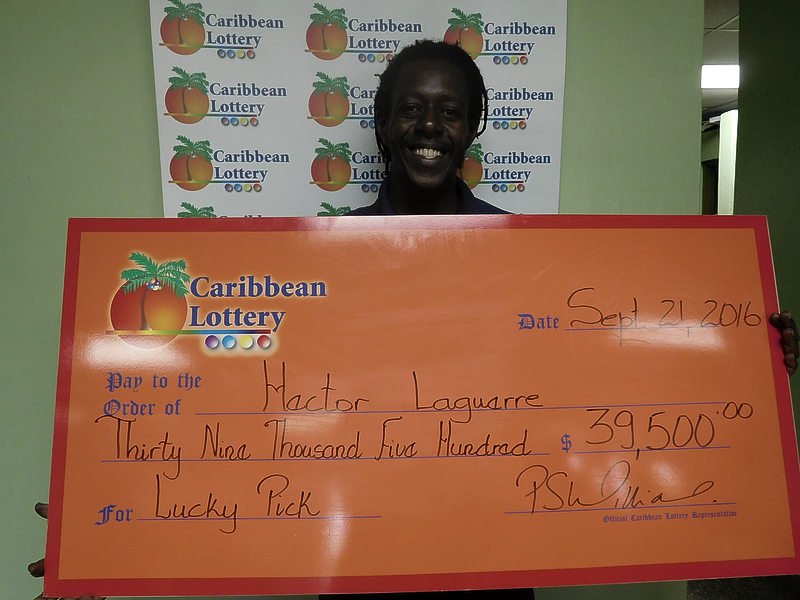 PHILIPSBURG–St. Maarten resident Hector Laguerre is celebrating his win of US $39,500 from the Lucky Pick draw #932 on September 19.

The winning numbers were 04, 07, 09, 10, 12. The 33-year-old is reaping the rewards of playing Caribbean Lottery games, and not for the first time. He previously walked away with $400 when he selected the winning numbers for his favourite game Pick 3.

Laguerre, who tries his luck at the games every day purchased his ticket from LinBin Market and selected them based on a quick pick wager that he previously made.

He spoke of his long history of playing Caribbean Lottery games and is excited about his windfall. He intends to reinvest the money into his business. His first priority is to purchase a vehicle that will allow him to service his customers better.

In a press release, Caribbean Lottery said that it is pleased to have awarded Laguerre with both his prizes and encourages players to try their luck with any of the five games available from over 49 retailers on the island. As with two-time winner Laguerre, the pay-outs can be significant.

Paula Williams said the company is thrilled to have awarded Laguerre with the Lucky Pick prize. “It’s especially a pleasure for us to know that he is a regular player of the games and has been able to get substantial amounts from two of our very popular games. Our players have the chance to win from a myriad of games including: Super Lotto, Lucky Pick, Pick 3, Pick 4, and a variety of Instant Scratch Games. We are certainly looking forward to our next big winner.”

Laguerre, who has tried his hand at all five games, said he remained inspired by the numerous winners he saw. He purchased three chances which cost him $3. His advice for other players is to “never give up. You definitely have to be in the game to win.” Laguerre said that he will continue to try his luck with his favourite Caribbean Lottery games.