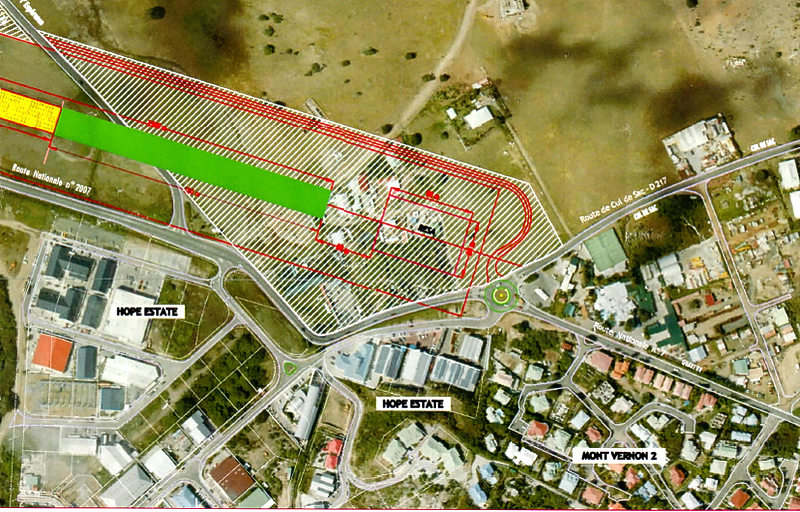 MARIGOT–Closing the deal on the long running land negotiation with the Laurence family for the runway extension is just a matter of “days away,” new Managing Director of L’Esperance Airport in Grand Case, Daniel Lefebvre, confirmed on Tuesday.

His assurance concurs with comments made by First Vice-President Guillaume Arnell on the occasion of President Aline Hanson’s New Year wishes on January 13 when he stated “the sale of the land is in process.

“The deal is not signed yet but we have been promised by the Collectivité that it is going through,” Lefebvre said.

According to Lefebvre the Collectivité has purchased the required parcels of land for five million euros, with a four million down payment now and one million more in 2018. It means work will start on the extension in 2017. He estimated construction of the extension, installing infrastructure and re-positioning the road will cost five million euros and will take about a year. The road diversion will need to be completed before the extension is constructed.

Lefebvre added the Collectivité financed the purchase of the land for the extension from the 10 euro tax added to each ticket over the past four years. That decision caused quite some controversy among the airlines at the time with one threatening to decamp to Princess Juliana International Airport SXM.

Extending the runway from 1,200 metres to 1,500 metres clears the way for the next phases of the airport expansion to proceed, something which the new director will be overseeing although technically the airport’s operational management is entrusted to Société d’Exploitation St. Martin Aeroport (SESMA) an entity set up by the Collectivité in 2011.

The much needed extension will permit larger aircraft to use the airport thus increasing the economic activity and turnover of arrivals and departures. Already the 5.6 million euro renovation to the airport completed under former director Mongi Djouba’s tenure has included a modernised terminal building, fire station upgrade, extended parking apron, and new control tower; putting the airport on course for its target of 200,000 passenger movements a year.

The fire station is now in complete conformity with two trucks and seven employees. No changes are envisaged for now to expand the car park which takes 80 cars but it is in the planning for a future project.

In two weeks from now, the airport will launch a customer survey to evaluate what passengers think of the improvements to the terminal, boutiques, and restaurant etc.

Lefebvre indicates his priorities are to realise the runway extension, obtain authorisation for night landing (currently under study by the French Civil Aviation Authority) and to develop the charter and private jet market, but emphasises Grand Case Airport is not in competition with Princess Juliana International Airport SXM in that respect.

“What is apparent at Princess Juliana is that it is so busy sometimes between 11:00am and 4:00pm that rich owners of private jets cannot take off or land when they want to and I think that in the future our airport will be a solution for that.

“Business aviation is a very competitive growing market in the nearby islands and we do want to capture some of it. It’s not a huge market but it is high quality and good for tourism. The Collectivité had the good foresight to purchase some land before in the airport here so in the future we won’t have any problem to extend the parking possibilities for private jets.”

Currently night landing at Grand Case Airport is not permitted but take off at night is allowed. This will soon change once the Civil Aviation Authority gives permission for night landings. The main requirements are to have red beacon lights on the mountains and in the lagoon for the approach.

“Once night landing is authorised the pilots will have to get used to it which will mean extra training given by the airlines,” Lefebvre explained. “The runway is actually 35 metres wide and not 45 metres which is the norm. The pilots will have to be convinced that it is safe to land but we don’t see why it would not be if the Civil Authority, which is very strict, authorises it. From our side everything is practically completed.”

He added next week he will have a meeting with the Civil Aviation Authority in Guadeloupe and expects approval to be given in about a month.

“I think it will be great for the airlines to develop their traffic by operating later in the evening. But we don’t plan to be having arrivals and departures up to midnight. The idea is to have an aircraft stay overnight. The problem now is if you go to Guadeloupe on business you have to stay overnight. But now you will be able to go over and come back the same day. Staying open later will not be a problem. The staff want to work. What I noticed when I arrived is that they are very aware of the importance in developing the airport for their job security, for their families.”

Lefebvre comes to St. Martin seeking a change after spending six years as the airport director in Mayotte in the Indian Ocean.

“Mayotte was quite an adventure for me because it is completely different to St. Martin in terms of development and tourism, just a few hotels that are not very good quality,” he explains. “It is a pity the development is so slow. The population is African and 97 per cent Muslim. Still, it was an interesting experience. We built a very big terminal because the airport takes the big airlines. It is similar to the size of Princess Juliana Airport. I took the job in St. Martin when it was proposed to me because it is an interesting project.”