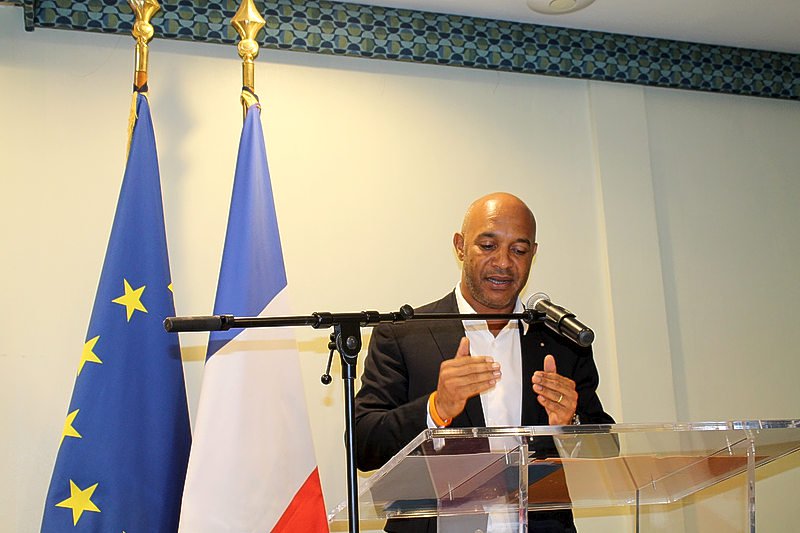 MARIGOT–Exoneration of land taxes, waiving of social charges for ten months, and a relaxation of the building permit requirement were among the latest aid measures for rebuilding St. Martin President of the Collectivité Daniel Gibbs announced at a press conference Saturday.

He returned from the third Inter Ministerial meeting for the Reconstruction of St. Martin in Paris where he complimented the French Government for its “attentive ear” and the “significant advances” that came out of the latest meeting.
The measures, most aimed at assisting businesses, were accompanied by an overview of the different phases in the so-called Phoenix Plan for the reconstruction of St. Martin.
Gibbs confirmed cost of reconstruction after Hurricanes Irma and Maria has been evaluated upwards at 3.5 billion euros, public and private sectors combined.
Successful negotiation with the State has permitted social charge payments to be waived for 10 months while exoneration of land tax (an Executive Council decision taken on September 22) to help the taxpayer represents nine million euros that will be missing from the budget, he said.
For the construction phases, the building permit obligation will be removed until October 1, 2018, replaced by a simpler declaration of work, the purpose being to speed up the whole rebuilding process.
One important measure for businesses emerging out of the Paris meeting was adaption of the Overseas Development Loans from investment bank BPI available from 10,000 up to 300,000 euros to small businesses, without need for guarantees.
“I also got assurance from the President of the French Federation of Insurance companies that businesses are insured for theft if they have been looted,” he added. “The Collectivité in this regard has applied for the necessary funds to reimburse those businesses.”
On the Phoenix Plan which will be presented at the next Territorial Council meeting, this is split up into four different phases; reconstruction, relaunching the economy, assisting the youth to achieve success, and accompanying St. Martiners.
The reconstruction phase will not only include suppression of the building permit requirement but also a modification of the Urban Code to redefine risks of certain reconstruction projects post Irma. To ensure the safety of citizens, it will be necessary to reflect on how to redevelop high risk areas such as Sandy Ground and French Quarter, not forgetting the coastal areas. This consultation will be done with the cooperation of inhabitants.
Reconstruction will also include realising ambitious projects such as Grand Marigot or redevelopment of Grand Case, adapted to the environment, or developing new residential sectors quickly to correspond to a new reality of living.
Sectors that are deemed the most exposed to risk will be studied carefully, case by case. Hotels and restaurants in the private domain that drive the economy will be rebuilt taking in to account maximum safety of persons, infrastructure and materials.
On Orient Beach for example, buildings must be of light construction and able to be dismantled. Discussion with individual proprietors on this topic will be required.
The economy relaunch has three objectives; support of businesses, development and diversification.
“To support businesses to get back on their feet, I additionally decided to give them a part of the 24-million-euro European fund envelope for reconstruction of St. Martin,” he disclosed. “And to complement that, 16 million euros of Solidarity Funds will be dedicated to training and return to employment.”
At the end of the month the President will be in French Guiana to request supplementary funds from the European Commission.
On development, the tourism strategy for development and reconstruction for 2017-2027 will be presented at the next Territorial Council meeting. Diversification in the period of reconstruction will present opportunities to construct in an environmentally-friendly way and to use renewable energies. Bâtiments Travaux Publiques (BTP) will receive a boost from the many construction projects available.
“The decision was taken with hoteliers to consider the 2018 season as given over to reconstruction. Although we want to maintain our visibility in the marketplace we must understand it makes no sense to reopen if conditions are not optimal. I therefore applaud the courageous decision taken by hoteliers to restart the season in 2018-2019.”
For the success of the youth, emphasis will be put on adapting teaching methods for St. Martin which is a possibility mentioned in the organic law. Sport, training, and access to employment are fundamentals for young people to succeed.
Gibbs indicated at the start of the press conference that the Collectivité in the past month has paid some six million euros to local companies for distributing provisions, clearing and cleaning the territory, repairing damage in the schools, and assisting hurricane victims through the work of the Department of Solidarity and Families.
He added in terms of security, the French State has agreed to maintain the extra security forces in the territory – Gendarmerie, French army, police – for “several more weeks.” Lt. Colonel Sébastien Manzoni confirmed on Friday there are currently 577 Gendarmes on the territory.